Flash floods at Jalan 19A, Selayang need to be addressed 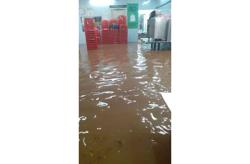 THE main road of Jalan 19A at Selayang Centre Point commercial area in Selayang Baru is prone to flash floods.

Water rises to an average knee height of 51cm whenever there is a downpour.

All it takes is half an hour of rainfall for roads to be filled with water.

Clay vessel dealer, Phua Siew Hock, 50, said in April, continuous rain caused water levels to rise and his van which was parked along Jalan 19A was damaged in the incident.

“I could not do much as water had covered the van’s tyres and seeped into the engine. Other cars along Jalan 19, Jalan 19B and the nearby areas were also partially submerged, ” he said.

“Each general election promises are made for drainage rectification works but they are all empty promises.

“We are desperate for a solution as our businesses are affected, ” he added.

Ong Cheng San, 60, whose shop is at the corner of Jalan 1C and Jalan 19A said flash floods affected property and caused much economic hardship because customers shun the area.

“Water in the partially closed sump at the corner of Jalan 1C and Jalan 19A hardly flows out, ” he said.

Ong suggested to MPS to thoroughly desilt the drains.

“I feel MPS has no proper planning in addressing the flooding problem.

“The actual reason is backflow from a network of drains that channels to a stream leading to Sungai Udang, ” he added.

Last Friday, shopkeepers gathered at Jalan 19A to protest against MPS’ inaction in addressing the flash flood issue.

Social activist Goh Eng Guan, 57, said if MPS was unable to handle rectification works to overcome the flash floods, then it should call the Selangor Drainage Irrigation Department for assistance.

“If Kumpulan Darul Ehsan Berhad (KDEB) contractors are not equipped with the tools to clean the drains then MPS should remove them.

“MPS should get its workers to do the job as it has all the tools including suction pumps, ” he said.

MPS councillor S. Deveandran said there were multiple issues causing the flash floods, ranging from backflow of water as the drains were unable to cope with the volume of rainwater, to the lackadaisical attitude of KDEB workers in not removing silt and rubbish in the drains.

“The Selangor government allocated RM2mil to improve the drainage network but various issues of illegal extensions need to be addressed.

“We have to resolve this issue as even Jalan 11, Jalan 10A, Masjid At-Taqwa and the immediate areas experience flash floods.

“According to MPS engineers there is a need to have several retention ponds along the alignment of the stream to control the backflow of water, ” he said.