THE night markets at Jalan Udang Siar in Segambut and at Jalan Kelab in Jinjang Utara, Kuala Lumpur will be reopened with strict standard operating procedures (SOP).

Both have been closed since the movement control order (MCO) came into effect on March 18. Traders queueing up to apply for lots at the night markets that will reopen in Segambut and Jinjang Utara. — Photo: SHAARI CHEMAT/The Star

The former will open from Oct 3 while the latter is scheduled to reopen on Oct 10.

Night market traders were seen applying for lots at the temporary Kuala Lumpur City Hall (DBKL) counters set up by officers in Jalan Udang Siar over the weekend.

Kepong Community Service Centre head Yee Poh Ping said despite the reopening of both markets, DBKL was relatively slow in allowing other night markets in the city to operate, in comparison with Selangor.

“Most of the night markets in the neighbouring state have reopened.

“Although DBKL has a very strict SOP, they should expedite the application for other night markets.

“The whole of Kuala Lumpur has 98 night market locations and only 28 are open.

“Currently, there is only a night bazaar at United Point Residence that has opened in Kepong and Segambut constituency, ” he said during a press conference held at the site.

“We want DBKL to approve these locations as the traders need an avenue to trade and earn some income during this recovery MCO, ” he added.

Yee also urged Kepong Baru morning market traders to attend a briefing by DBKL today at the public carpark near Jalan Bangau 1, on the upgrading works at three roads that would affect their operations.

“DBKL plans to resurface Jalan Bangau, Jalan Bangau 1 and Jalan Camar besides upgrading the drainage to address flash floods in the area.

“Traders will need to move to a nearby location during the upgrading period, so they have to attend the briefing to secure themselves a slot, ” he said. 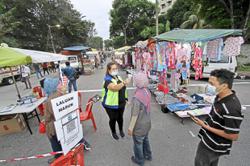 Mulling move to ease the burden 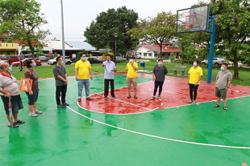