Guardiola has been heaping praise on young English star Foden.

PEP Guardiola was full of praise for Kevin De Bruyne after the Belgian spearheaded Man City to victory over Wolves in their opening Premier League match of the season last weekend.

The Premiership’s PFA Players’ Player of the Year was simply devastating. It is this lad whom Leicester may want to pay special attention to when they clash at the Etihad Stadium tomorrow.

Widely considered among the three top players in football right now, De Bruyne appears to have fully recovered from the injuries that set him back last term. And his display at Wolves merely underscored that fact.

The England midfielder, who is being touted as a long-term replacement for David Silva, did himself no harm with a solid performance that was highlighted by a first-half goal in their 3-1 win.

City were scintillating last weekend, particularly in the first-half when they looked every bit like the four-time champions they have been in the decade.

New signing Nathan Ake partnered John Stones in central defence and they looked comfortable enough to maybe get another start tomorrow. It was also good to see Fernandinho back with the veteran Brazilian dictating things from his deep-

lying midfield role. Another one of those City players badly affected by injury last season, he certainly made his presence felt and should do the same tomorrow.

There is no denying that injuries played

a massive part in limiting City’s progress last term (Sergio Aguero is still sidelined) but, if they continue like how they started this season, the Citizens may well regain the league title this term as so many have forecasted.

Leicester were beaten 2-0 by Arsenal in the League Cup on Wednesday. But they had seven changes to the side that defeated Burnley in the league last weekend and it is that line-up (or most of it) that Brendan Rodgers will opt for against City.

Their main threat should again come from Jamie Vardy, playing down the middle of the attack. Timothy Castagne should be the one to watch for Leicester — the Belgian fullback showing some good early season form. 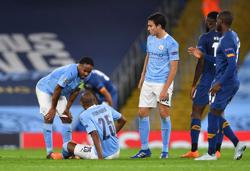 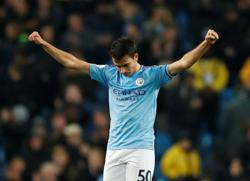 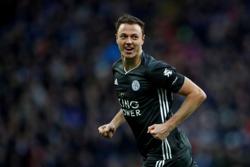