Ismail (second from left) discarding cans into a recycling bin during the World Cleanup Day programme in Gelang Patah. Looking on is Ayub (left).

Johor housing and local government committee chairman Ayub Jamil said action would be taken against landowners who had repeatedly ignored warnings by the authorities.

He said 189 illegal dumpsites had been identified in Johor so far this year, with most found in Johor Baru and Iskandar Puteri districts.

He said 88 were found to be owned by repeated offenders.

“Fines have been issued and legal action taken.

“If the councils and Solid Waste and Public Cleansing Management Corporation have given advice and such cases continue to occur, then action to seize the land can be taken, ” said Ayub after a national-level 2020 World Cleanup Day Programme launched by deputy Housing and Local Government Minister Datuk Seri Dr Ismail Abd Muttalib in Kampung Pendas Baru, Gelang Patah.

“We will talk to the land owners first but if they still fail to listen to us and allow their land to be used as illegal dumping grounds, then we will take it away, ” he added.

Ayub pointed out that the action to take away private land from its owner was in accordance with the National Land Code.

“Perhaps this is the only way to deter them from turning their land into illegal dumping grounds, ” he said.

He said that the event held at Kampung Ladang and Kampung Pendas Baru attracted some 400 participants, including 226 volunteers from NGOs and 138 people from the two villages.

“Within just an hour, we collected more than 900kg of rubbish.

“Through this programme, we hope to increase environmental awareness among the public, ” he said, adding that the ministry would be holding similar events in the near future.

Ismail stressed that the ministry was also looking at meting out harsher penalties to those found guilty of environmental-related offences.

“We will study the existing Act and see if there is a need for any amendments, ” he said.

We will talk to the land owners first but if they still fail to listen to us and allow their land to be used as illegal dumping grounds, then we will take it away. 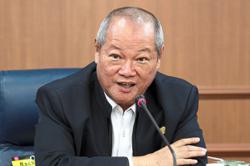