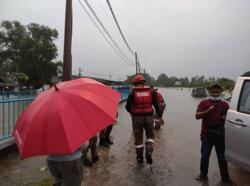 A large tank and two jerrycans placed beside a drain at a construction site near Jalan TPK 2/2 in Taman Perindustrian Kinrara.

THE smell of noxious fumes emanating from a drain in a housing has raised the ire of residents at Bandar Kinrara in Puchong.

When met by StarMetro, several senior citizens said the odour was so strong, it triggered dizzy spells, headaches and nausea among a few of them.

“The smell was similar to insecticide solution from mosquito fogging but I thought nothing of it then, ” said Wong.

Another resident, Ramesh Vadivelu, said he caught a whiff of the fumes while standing in front of his house in Jalan BK3/10A last week.

“It was like the smell of diesel, ” said the automobile workshop owner.

The smell was also reported by a morning exercise group at a playground in Jalan BK3/1.

Residents Chong Kwai Chee, Shireen Ho, Choong Sai Moi and Hon Moi Ngong said, like Wong, they thought the smell was due to a fogging exercise until someone pointed out that fogging would not be conducted so early in the morning.

At SK Section 2 Bandar Kinrara, security guard Ramdas Marudeviren said he too, detected a diesel-like smell coming from the drain in front of the school at around 7am as parents dropped pupils off at the main gate.

Prompted by curiosity, Hon, the leader of the morning exercise group, followed the odour and traced it to a monsoon drain that ran through the housing area.

“This drain runs all the way to Jalan BK3/2 where the playground is located, through the backlanes of Jalan BK3/10 and along Jalan BK 3/3B, which is just next to the Puchong-Sungai Besi Highway. At Jalan BK3/8 where the primary school is located, we saw oil-like patches in some parts of the drain, ” said Hon.

By evening, the odour could no longer be detected but the incident had raised the alarm among residents who suspected the fumes could have come from chemical waste being illegally dumped in an unidentified location near the housing area.

Subang MCA division chairman Lawrence Chiew said this was not the first time there was effluent discharge in the housing area’s drains.

“Some years ago, when a fire broke out at a factory located in Kinrara Industrial Park opposite the Bandar Kinrara housing area, an unidentified liquid travelled from there to the drains here. This liquid produced huge bubbles which floated out from the drains into the surroundings and stuck to vehicles. There was also a strange smell from this liquid, ” said Chiew.

Residents also deduced that the drainage system between the industrial park and housing area was connected, which might explain how the leakage from the factory fire several years ago reached the housing area.

Following the recent episode, residents are suspecting that the drain connection may have played a role.

Residents who went to the industrial park said they saw a newly set-up construction site where two large tanks, believed to contain diesel or engine oil, placed beside a drain near Jalan TPK 2/2.

There were large patches of spillage on the road surface and on a grassy area where a makeshift workers’ dorm had been set up. In the drain was blackish water.

When contacted, Matthew Koh, a project engineer at Great Tunnel, the subcontractor in charge of the site, said the diesel tanks were placed there to supply fuel to power the machinery for a drainage construction project.

Refuting allegations of dumping, Koh explained that on Sept 14, a valve in one of the tanks had malfunctioned, causing diesel to spill out in the late evening. The malfunction was only discovered the next day.

Koh said as soon as he was alerted of the situation by the site manager, a water tanker was sent to the site to flush the drain.

Chiew said the smell had dissipated and residents were no longer bothered by any more unpleasant odours. However, he reiterated the seriousness of the issue, citing the recent unscheduled water cut which had affected 1,200 areas in the Klang Valley as an example of the far-reaching consequences of pollution.

“Construction sites as well as factories must really look after the storage of flammable and toxic liquids like diesel or gasoline to avoid leaking for the sake of public health and safety, ” said Chiew.

“This is unacceptable. I will get MPSJ’s enforcement team to check on this, ” said Ng who is also Kinrara assemblyman.