Some areas within the Heritage Quarter have been barricaded with red and white tape to prevent people from trespassing. (Right) Workers covering cement and sand at the site with plywood to prevent them from getting wet.

AFTER lying in a state of disrepair for over two years, Kuala Lumpur City Hall (DBKL) has been tasked to repair the ageing Heritage Quarter area which is also referred to as Precinct 7.

“Maintenance work has started in some areas and will be a continuous effort.

“Currently we are at Phase One and we expect it to be completed by Oct 15, ” he said.

The maintenance contract was awarded via “Kerja Undi” whereby contracts worth RM200,000 and below were awarded through a balloting session to qualified contractors.

“Kerja Undi” is an initiative by DBKL in an effort to boost business among registered small contractors in the city.

StarMetro had previously reported that since the first phase of the iconic RoL project was launched by then Prime Minister Datuk Seri Najib Razak on August 29,2017, where the main attraction called the “Blue Pool” is located, the area was already showing signs of it falling apart.

However, the first phase of DBKL’s repair works are only limited to the Heritage Quarter.

Since the launch of Phase One by Najib three years ago, there has been no designated ministry or agency to manage and maintain the project site.

Plans for the Government to appoint a private firm to manage the site did not pan out.

Since there was no designated company to take over the city’s most ambitious project; it was bound to fall into disrepair with no regular maintenance.

To be fair, many of the defects were attributed to vandals and vagrants who had made the Heritage Quarter their “sleeping quarter”.

Considering the gravity of the situation, the Federal Territories Ministry recently gave DBKL the responsibility to maintain the site.

StarMetro visited the Heritage Quarter recently and noticed that signage informing people of the impending repair works were up.

Bags of cement and broken tiles were spotted at the site, indicating that work had started.

Some areas have been barricaded with red and white tape to prevent people from entering the site.

Contractors were spotted removing the white marble tiles at some of the attractions which were giving way.

At the Look Out Point spot, where Sungai Gombak and Sungai Klang converge, Amin Jay, who runs Makan.buzz cafe was relieved to see that work to upgrade the place had begun.

Amin is renting one of the premises located at Look Out Point.

“It’s about time the authorities repaired the premises.

“This place is definitely looking shabby even though it is brand new, ” he added.

“The tourism office has been abandoned or rather has not been functioning for over two years, and although new, it’s already looking old, ” he said.

Amin added that the recent flash flood was also unkind to the area as the aftermath had made the place look worse than ever.

The much touted Blue Pool project, a pride and joy of the city, was the most distressed it had ever been.The Blue Pool project features a blue water fountain and is meant to enhance the attractiveness of the site, especially at night.

After the recent flash flood which saw rainfall reading exceed 200mm and caused the river water to spill over, it took a private contractor several days to clean up the area.

The water pool surrounding the area was filled with debris and rubbish.

There are three stages to the RM4.4bil RoL project: river cleaning, river beautification and riverfront development.

A sum of RM3.4bil will be used to clean up the river while RM1bil will go towards beautification and landscaping.

The project was launched in 2012 and falls under the Economic Transformation Programme initiated by Najib and was targeted to be completed by 2020, with commercialisation and tourism to commence after 2020.

However during a walkabout at the site in July this year, Federal Territories Minister Tan Sri Annuar Musa said the project deadline had been pushed to 2024 to allow the completion of some work packages. 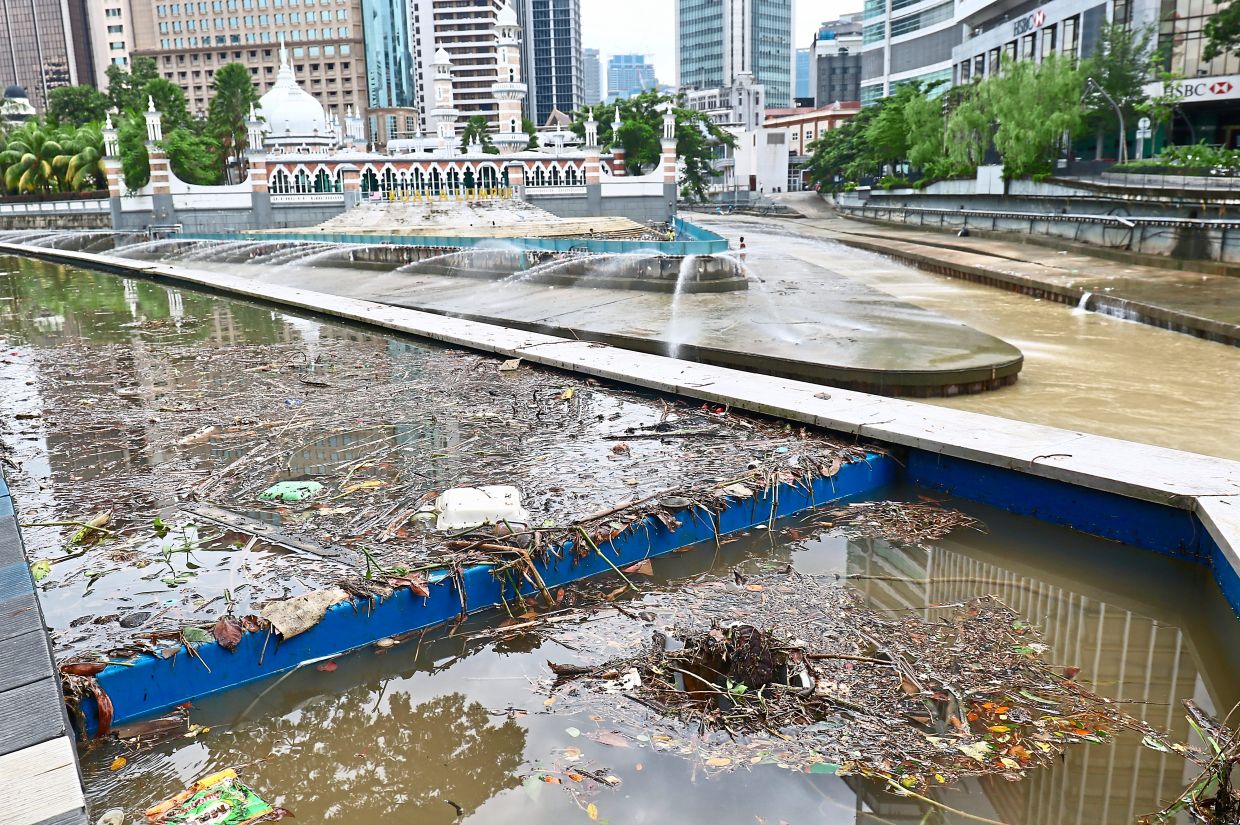 The recent flash flood in Kuala Lumpur took a toll on the River of Life site. — Photos: SAMUEL ONG/The Star

The Tourism Centre at Look Out Point near Masjid Jamek has been abandoned for some time. (Right) The side pool, which is part of the Blue Pool, is filled with debris and rubbish.