Annuar (in green jacket) being briefed on the proposed beautification and upgrading of Taman Awam Rimba Kiara during the event.

Federal Territories Minister Tan Sri Annuar Musa, who made the announcement, also confirmed that a 6.8ha area of the park in Taman Tun Dr Ismail, Kuala Lumpur, would be gazetted for the community’s recreational use and no further development would be allowed on this parcel.

Before it was demarcated, Taman Awam Rimba Kiara had sat on a 10.12ha tract.

Following fierce opposition by the community, YWP chief executive officer Zaizalnizam Zainun said last year that it would return 1.62ha of the land to DBKL, bringing it to the present coverage area.

Steering clear of questions on the development project as the matter was still pending in court, Annuar said he was aware of the controversy surrounding the green space even before he took office.

“Public recreation and green spaces must be maintained, constantly improved and be subjected to review for upgrades as they are an important feature to a community.

“In this vein, I have asked the Kuala Lumpur mayor if any more of such urban recreational spaces can be added to the ones that are already in existence.

“The DBKL Landscape Department, in their budget and planning, must identify places where there are abandoned lakes and river reserves to see if they have the potential to be turned into green lungs.

“Once these areas are turned into parks, they must be gazetted as such so that development cannot take place, ” he added.

Annuar was speaking at an event organised by DBKL’s Landscape Department at Taman Awam Rimba Kiara.

Some 500 volunteers came forward to help the department repaint picnic benches, plant shrubs and trees and patch up a barren mini football field with cow grass.

On the park’s upgrading exercise, Annuar said it would cater towards the elderly and families with young children.

A river located at the southern part of the park will be opened to the public as an additional natural feature.

In addition to ensuring that the 1,000 newly planted trees and shrubs thrive, Khairul Amin said he would also be working to restore the main pond.

The upgrade will be divided into six zones.

An observatory tower, canopy walk, wall climbing and a riverfront boardwalk are mentioned in the concept proposal plan.

In order for the community to participate more proactively in the project, Sahabat Taman Awam Bukit Kiara, a social media page has been set up to allow for ideas and suggestions. 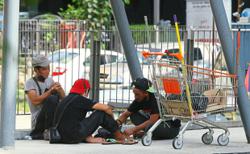