Work is taking place to strengthen the bund along Sungai Langat with rocks at Kampung Revolusi Hijau, Dengkil.

THE floodwaters may have subsided and the cleaning of mud and rubbish are over and done with.

However, in Sepang, worries of impending floods continue to haunt residents.

It is just a matter of time before they endure the same drill all over again.

Sepang which saw 12 locations affected, was the second district with the most flood-hit locations after Hulu Langat.

On how long the recurring flood problem had existed in Sepang, Azlee said Arif volunteers had distributed food aid and been assisting flood victims to move their belongings and taking part in after-flood clean up exercises since 2009.

The problem has become more acute over time, he noted.

“In the past, we spent no more than RM500 per mission.

“But from 2011, after housing estates started coming up in the surrounding areas, we were picking up more distress calls.

“In the latest July floods, expenditure for food aid and diapers to the affected villages, including Kampung Tanjung Mas in Sungai Pelek, came up to RM20,000, ” he highlighted.

He said that previously only a few kampung houses would be affected during a flood.

The land, mostly former padi fields that were passed down from their ancestors, had no more than five houses.

But when the housing estates developed, as many as 50 houses would be affected at a time, said Azlee.

He said it was common knowledge to the local community that the site where the new housing estates were now sitting on are flood-prone areas.

“Sepang Municipal Council should have scrutinised the land survey findings, drainage and elevation plans more thoroughly before approving these projects, ” he said.

In Kampung Semarang, Dengkil, Mohd Zailani Taib, secretary at Pewaris Warisan Penawar, a non-governmental organisation that offers humanitarian relief to disaster victims, said patience was wearing thin among residents who had to bear the cost of flood damages repeatedly.

Though repairs are carried out on damaged parts of the river bund after every flood, it is always broken by the force of upstream currents, he said.

During the recent July floods, force from rising waters broke through a part of the Sungai Langat bund and rushed about 600m inland and into all 50 houses in Taman Lestari Mewah, which is near Kampung Semarang.

“The water was so strong, it swept a few trees from nearby plantations down the river, ” said Mohd Zailani.

Locals said the S-bend at this part of the river could have contributed to the overflow as fast-flowing currents were forced to slow down while negotiating the meandering curves along the river.

“We see ongoing work being carried out but we wonder if the new bund will be able to withstand the force from the volume and currents in the event of another flood, ” said Mohd Zailani.

Kampung Dengkil village chief Sahadan Ahmadon said though he was told that the width of the new bund would be extended to 4.6m from the original 1.5m along Jalan KB1 near the housing areas of Taman Permata and Taman Baiduri, residents would have a better sense of assurance if a bund of sheet pile and concrete was built.

“We also want the depths of Sungai Langat to be checked, especially in areas where sand washing operations had taken place.

“If there is heavy sedimentation, then the riverbed must be deepened.

“Former sand mining ponds or water bodies must be monitored so that they do not end up as dumping sites, which will minimise their ability for water retention.

“Drains must be cleaned so that they are not choked with weed, dirt or rubbish, ” said Sahadan.

In a social media post, Amal Malaysia director Shehdi Hazrik Shamsudin said residents had complained of repairs being carried out only after a flood occurred.

Regular maintenance or upgrading work should be carried out before and not after a flood when the damage is already done, he said.

He added that residents had also suggested marking possible vulnerable areas along the bund so that remedial steps to prevent erosion and collapse could be carried out in advance.

In a state government news portal, Selangor public amenities, agricultural modernisation and agro-based industry committee chairman Izham Hashim was quoted as saying that the Selangor government had approved RM19.1mil to repair the Sungai Langat flood retention wall as part of its solution to address the frequent flood problem in the area.

Upgrading works for the 8km stretch along the river will begin early next year and is expected to be completed in two years time.

Izham hoped the project would be able to solve the issue and bring peace to the residents as the floods caused them huge losses.

He said this after visiting the Sungai Langat river bund upgrading site in Taman Permata Dengkil in August.

Norrehan also gave assurance that the council would monitor cleaning and maintenance works for drainage systems in the housing areas. 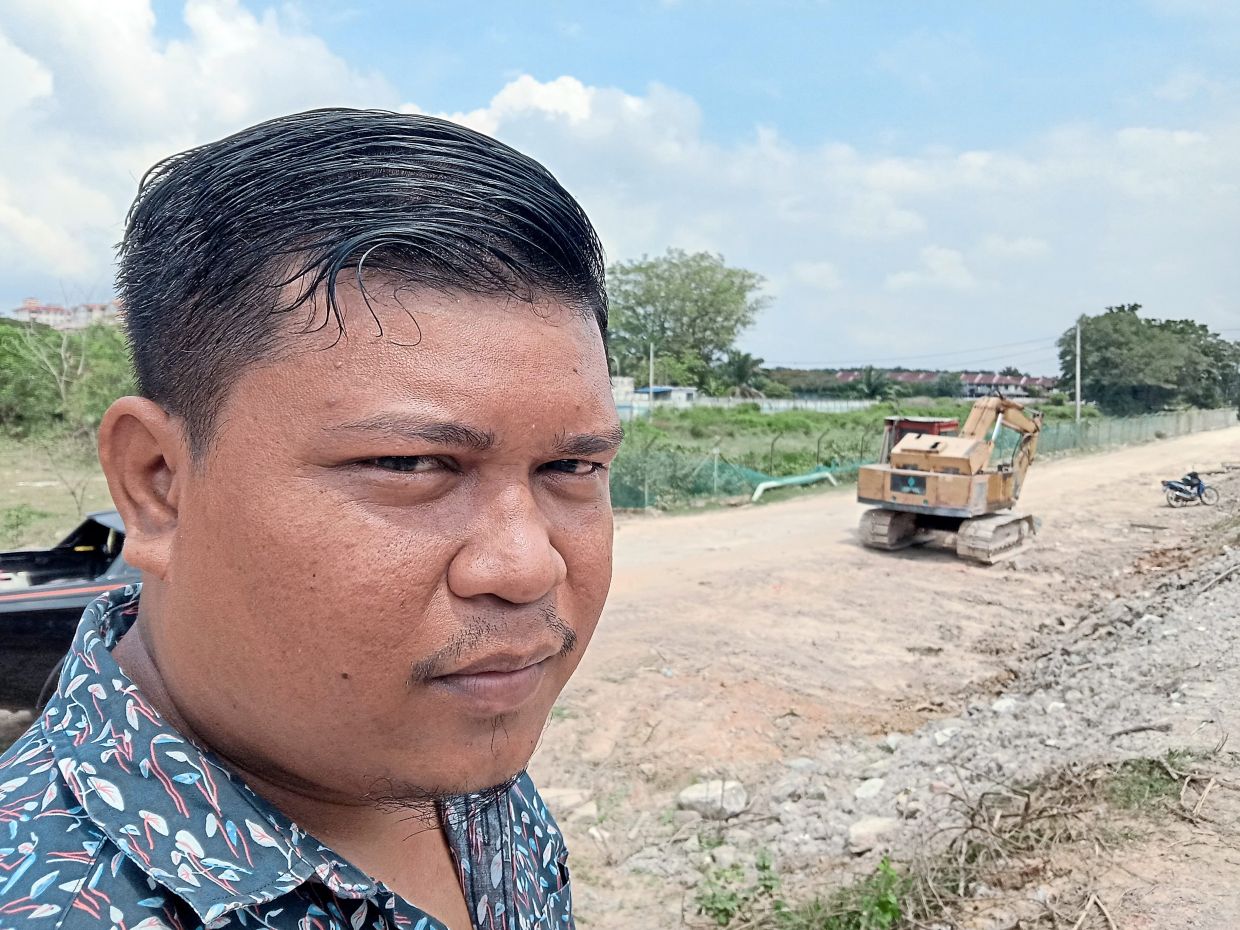 Work is taking place to strengthen the bund along Sungai Langat with rocks at Kampung Revolusi Hijau, Dengkil.

Residents of Taman Lestari Mewah have built a barrier of sorts in hope that it will safeguard their properties from rising waters in case a flood occurs again.

A drain leading into Sungai Langat near Kampung Revolusi Hijau and the Taman Lestari Mewah, Dengkil housing area. Residents want the drains to be regularly cleaned so they are not choked with weeds, dirt or rubbish which can hamper the flow of stormwater.

Mohd Zailani says patience is wearing thin among residents who have had to bear the cost of flood damages repeatedly.

Sahadan says residents will have more assurance if a bund of sheet pile and concrete is built as part of the flood mitigation solution.