THE controversial 50, Love Lane building in Penang will finally be restored after a few professional architecture and civil engineering companies came forward to help pro bono.

The restoration finally puts to rest the dispute between the building trustees Penang Chinese Clan Council (PCCC) and the state government. The parties had earlier tussled for ownership of the property.

PCCC chairman Datuk Yeap Beow Chong said it was heartening that professional teams had come forward to offer their services and plans have been drawn up and submitted to Penang Island City Council (MBPP) for approval.

“After much discussion and coordination, companies have undertaken to restore the building and we hope the plans submitted to MBPP are approved soon.

“We have received the best professional advice in planning, surveying and drawing, and also received help in submitting the documents to the authorities, ” said Yeap at a press conference at Meng Eng Soo Temple in Jalan Pintal Tali, George Town, Penang, on Thursday. Yeap said the movement control order due to the pandemic had slowed down the process but the they finally managed to submit the plans to MBPP on Wednesday.

“The transfer of the property to PCCC was fraught with a lot of issues and it was only transferred to us on Jan 15 this year, and plans to move forward were disrupted by the pandemic.

“Furthermore, we had to deal with many parties, including business owners next door and at the back of the premises, and plans were drawn up only after the parties consented to the restoration work.

“While the architects and engineers have done their job, we are still looking for a restoration contractor who can do the work voluntarily or at least with partial payment.

“This will complete the process undertaken by the other professionals.”

Ooi Sze Meng of SM Ooi Architect said the original characteristics of the building would be maintained with the bricks removed, checked and placed back into the structures. 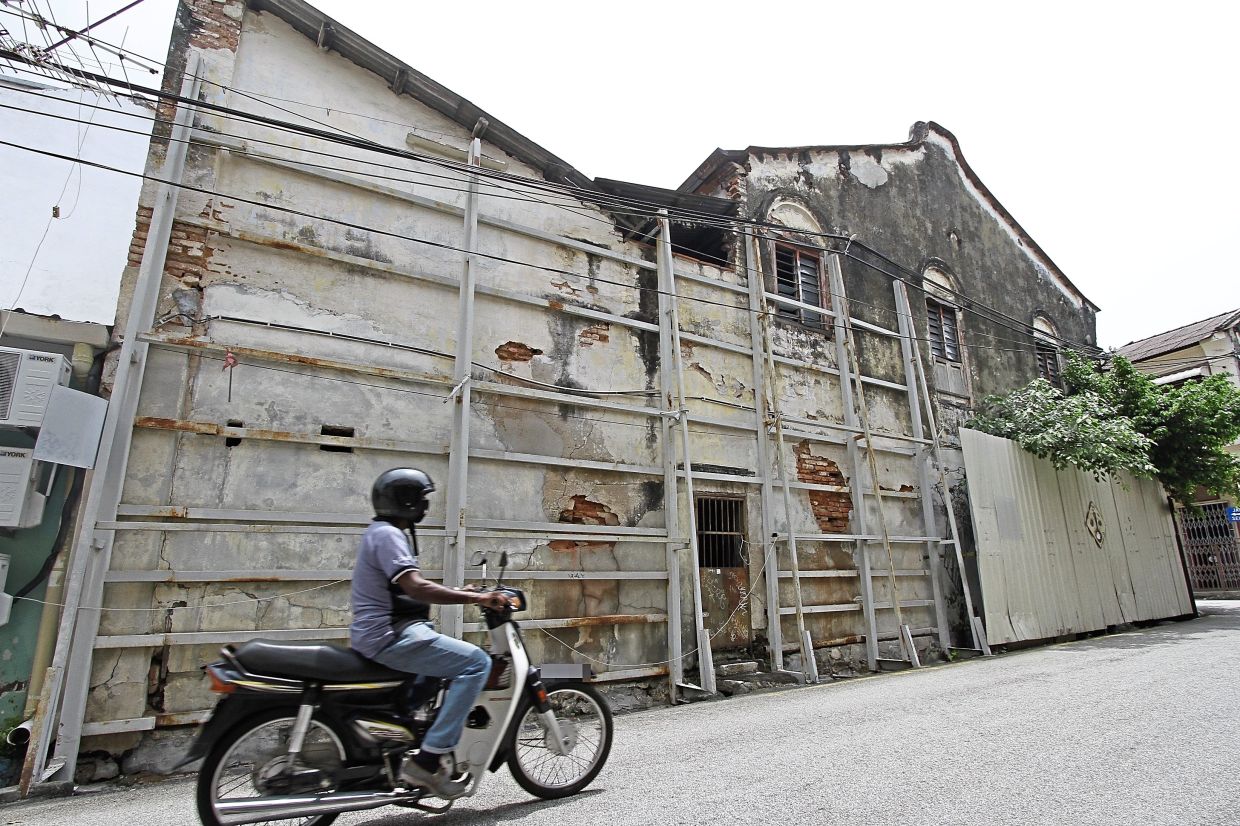 The dilapidated building supported by metal frames is located at the Love Lane-Muntri Street junction in George Town.

“We are performing a tricky balancing act between restoring the building to what it was before and also complying with the requirements of the Fire and Rescue Services Department and MBPP.

“Some of the timber structures are in a shoddy state.

“They will be removed and replaced with similar types of materials or closest to the original.”

Ooi said priority would be given to safety measures as parts of the building were very dilapidated and have to be replaced with new materials.

The state government was locked in a dispute with PCCC which began two years ago when it decided to give approval for the transfer of ownership to the clan council for a nominal fee of RM10 with several conditions.

One condition was for the site to be used only for the purpose of a museum and as a Chinese Early Settlement Interpretation Centre in Penang. The land cannot be transferred, mortgaged, let, sublet or be part of any kind of dealings unless approved by the state authorities.

The existing building needs to be restored and repaired within five years according to the heritage guideline and the owner was also required to pay a total of RM23,132.56 in arrears for the unpaid tax.

Former PCCC chairman Anthony Chang had called for the return of the property after it was seized by the state in 2014 due to unpaid property tax.

The property is connected to the Ghee Hin secret society, the largest grouping of Chinese immigrants in the 1800s, who played a major role in building Penang’s economy. Plans showing the rooms on the ground and first floors and also the shape of the roof of the Love Lane building.

An impasse had occurred when all the trustees of the 1,560sq ft property died without transferring their duties to the younger generation.

In 2017, the state government offered to transfer the heritage property to PCCC for a nominal payment of RM1 on the condition that PCCC supply evidence that it is the owner but the offer fell through.