SOME 75% of the women in abusive relationships stay due to lack of financial stability.

She created the social enterprise to help women rediscover their value and achieve financial independence.

“I get about three to five calls a day from women stuck in some form of abusive relationship.

“They generally stay in the relationship because they are homemakers without any savings.

“I usually tell them to lodge police reports and seek assistance from relevant bodies.

“However, the best way to help them break away from abuse is to give them a chance to gain financial independence.

“Some victims may have rich spouses whom they are dependent on as they may only be given credit cards to pay for purchases they need.

“These cards can be cancelled and the victim will be left in the lurch, with no means to even buy necessities,” said Vatsala.

“This puts them in a difficult position, making them hesitate over moving out of the house with their children.”

“I also find that most abused women have no support groups or friends to turn to for help.

“Most probably they were stopped from socialising by their abusive partners in order to keep them from talking about what happened at home.

“Many were oppressed and made to just stay at home with the children and endure the abuse,” she said.

In her view, it is best for the survivors to live on their own instead of moving in with their parents.

“They must learn to become independent.

“In many cases, the women return to

their abusive partners because they do not have a good support system or financial stability,” Vatsala noted.

Under Mom’s Village Asia, the #Startup1nita was formed during the movement control order (MCO) to especially help victims of abusive relationships.

The survivors learn entrepreneurial skills such as branding, social media marketing and financial management.“During the MCO, we started the webinar series.

“For those who cannot afford the series, we will try to find them sponsors,” said Vatsala. 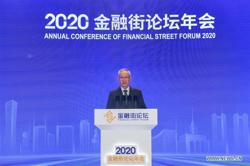 China plans to open up financial areas to foreign participants