By VIJENTHI NAIR and FARID WAHAB

IT IS the fourth day since businesses in the Klang Valley had to deal with dry taps but those that chose to remain open are pushing their limits.

Drinks stall operator Theng Tian Kai said the dire times forced him to take extreme measures such as saving water from melted ice, which were usually discarded, for washing purposes.

“My water and ice reserve are running low, so every drop counts. Once it finishes, I will close shop,” he said.

Chee cheong fun stall operator Wong Kin Phan, who started the business just a month ago, said he had no idea how to cope and closed his shop for the first two days.

“I bought water and reopened on Saturday but I do not know how long I can sustain. I also bought disposable plates and utensils to avoid washing,” he said.

In Kampung Baru, restaurant worker Firdaus Fauzi said only disposable cutlery was being used at the eatery.

He said water for cooking purposes was taken from other areas with water supply. They, however, did not have enough water to clean the toilets.

“Although we are able to open for business, our operational cost has increased and the toilets are filthy,” he said.

Another worker Faishal Ramsyah said the restaurant would have to shut its doors if the situation prolonged.“We are barely coping with the water cut now,” he said.

“We have had to turn away about 20 customers daily and are suffering big losses,” she said.

Operators of a hair salon and car wash in Petaling Jaya have decided to keep their business running until their taps run dry despite poor turnout.

Juvenex Hair Studio senior hair stylist Mars Choo said they would concentrate on providing services that used less water such as dry haircuts and chemical treatments instead of washing hair.

“I think the customers will understand,” he said.

Vinayagaa Autospa car wash owner K. Ragupathy said the shop would close once he ran out of water.

Meanwhile, residents unaffected by the water cut are helping family and friends in need of water.

Azli Haidie Ghazali, 28, from Pandan Indah delivered several containers of water to his aunt’s house and a friend’s restaurant in Kampung Baru.

“I will be making several trips to deliver water to them. I understand their difficulty as I have faced it before,” he said.

Mother-of-four Izzati Othman, 40, from Setiawangsa took her children to her sister’s house in Semenyih to have their bath.

“We have not showered in two days. We are also taking some containers to fill up water,” she said.One township that is faring well is Bandar Sunway.

Sunway Malls brands communications associate director Darren Chear said none of its properties were affected by the water cut because Sunway Berhad had invested in a water treatment plant that could supply water to all its properties, as part of its smart and sustainable city initiative.“We also have rainwater harvesting tanks as a water recycling strategy in some of our properties.

“This has enabled us to face this round of water cut without disruption.

“All our four malls in the Klang Valley are spared of any serious disruption,” he added.

The rest of 481 areas are in the process of recovery. 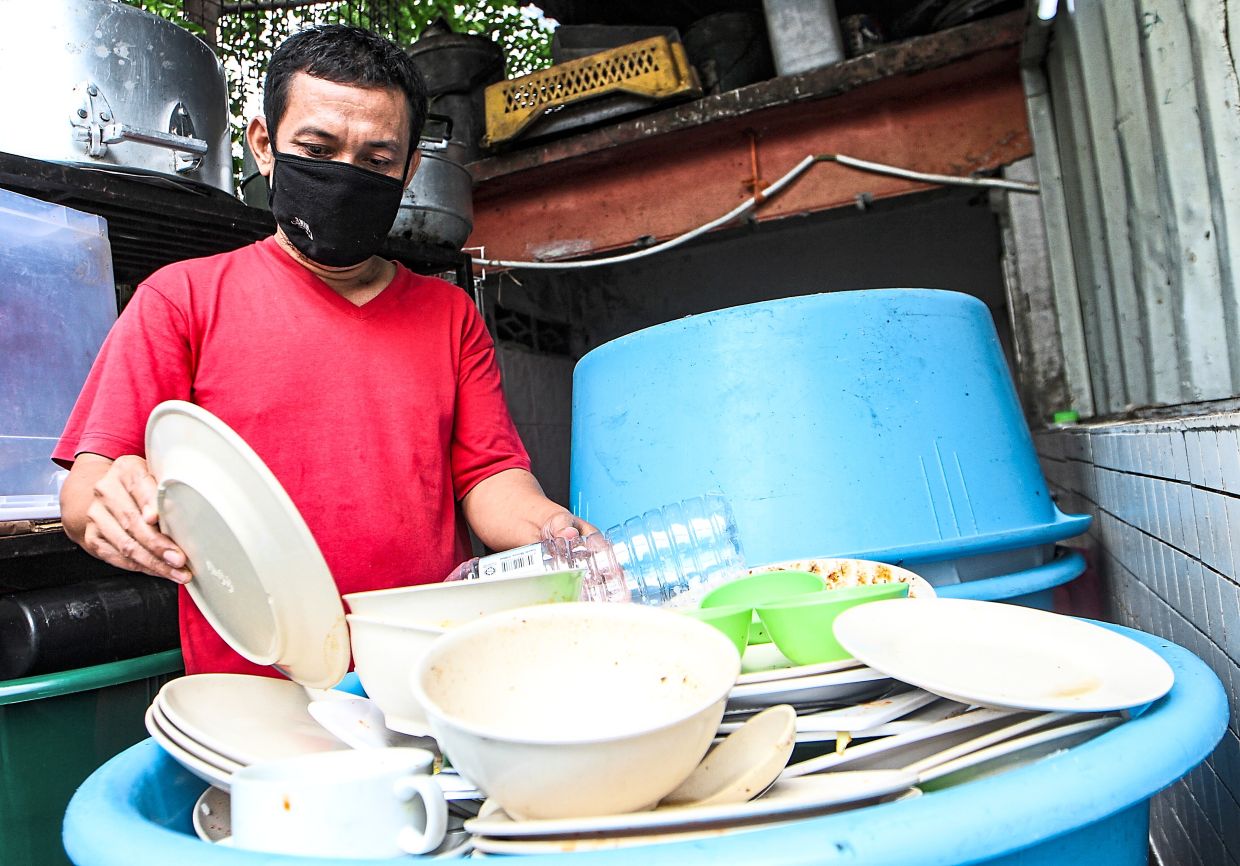 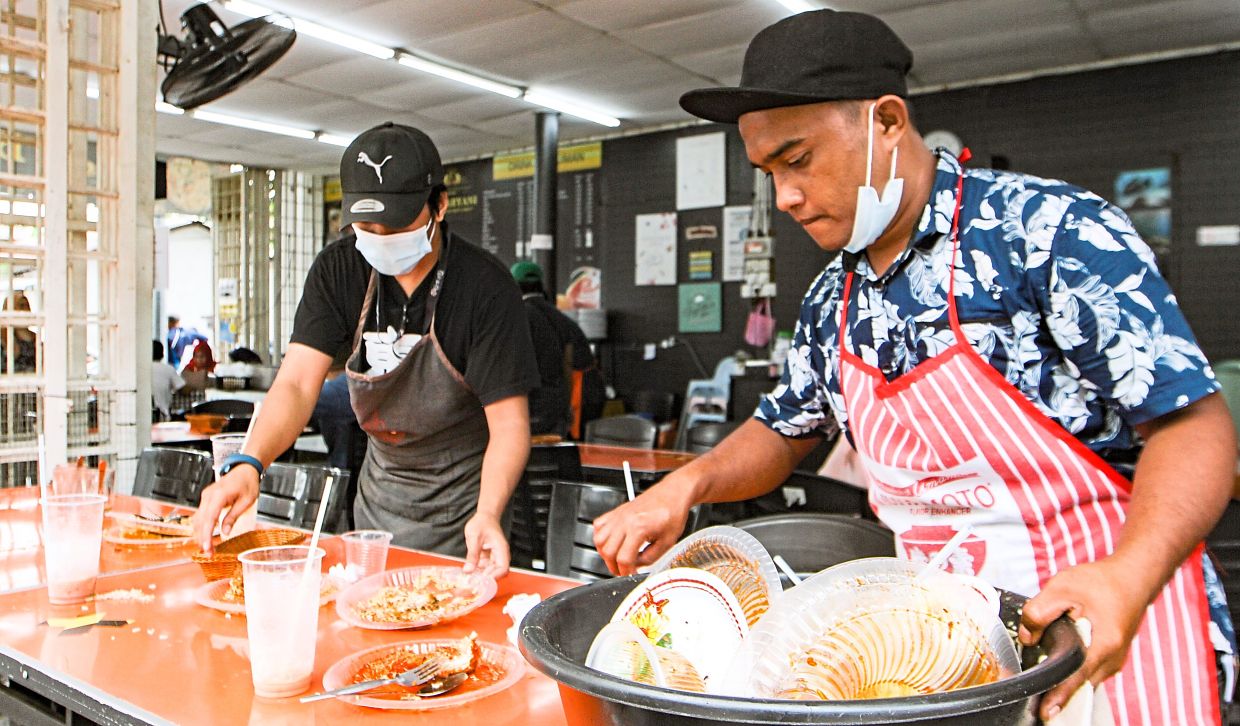 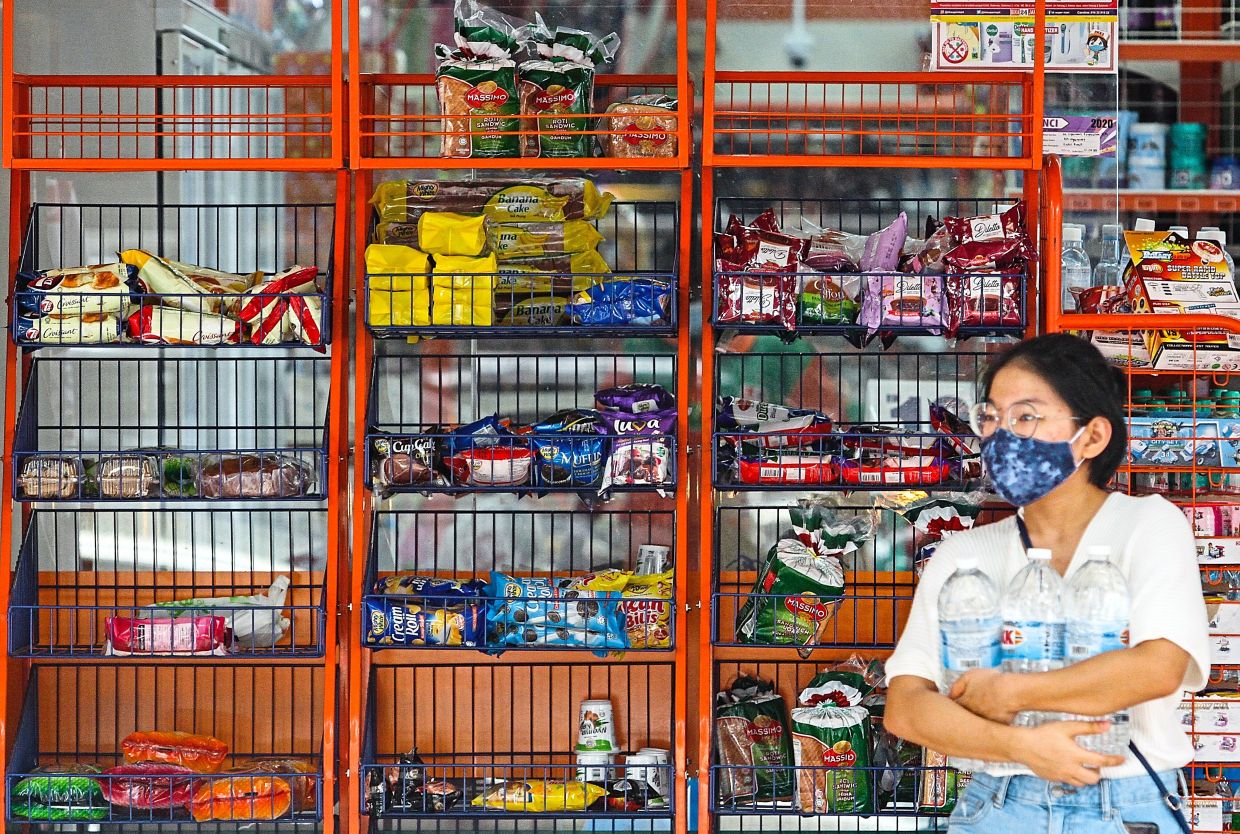 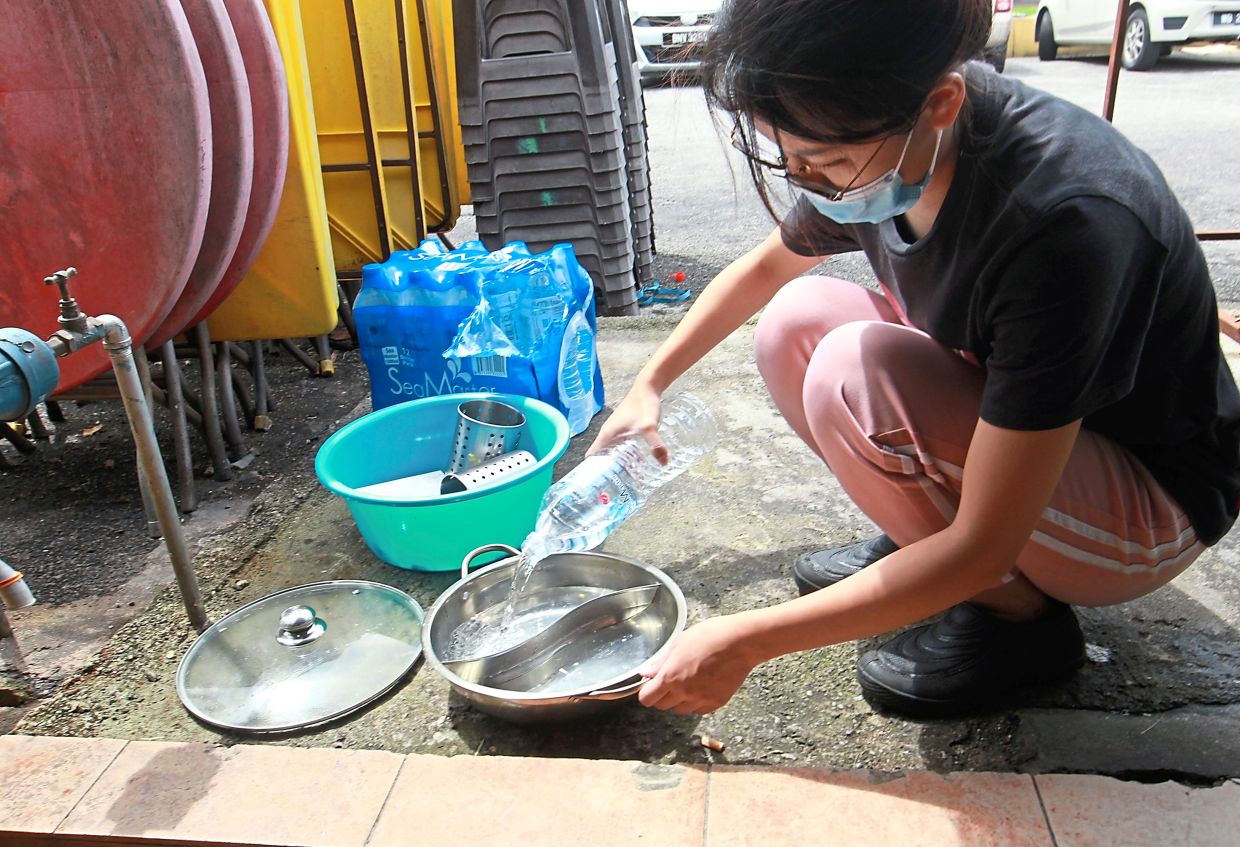 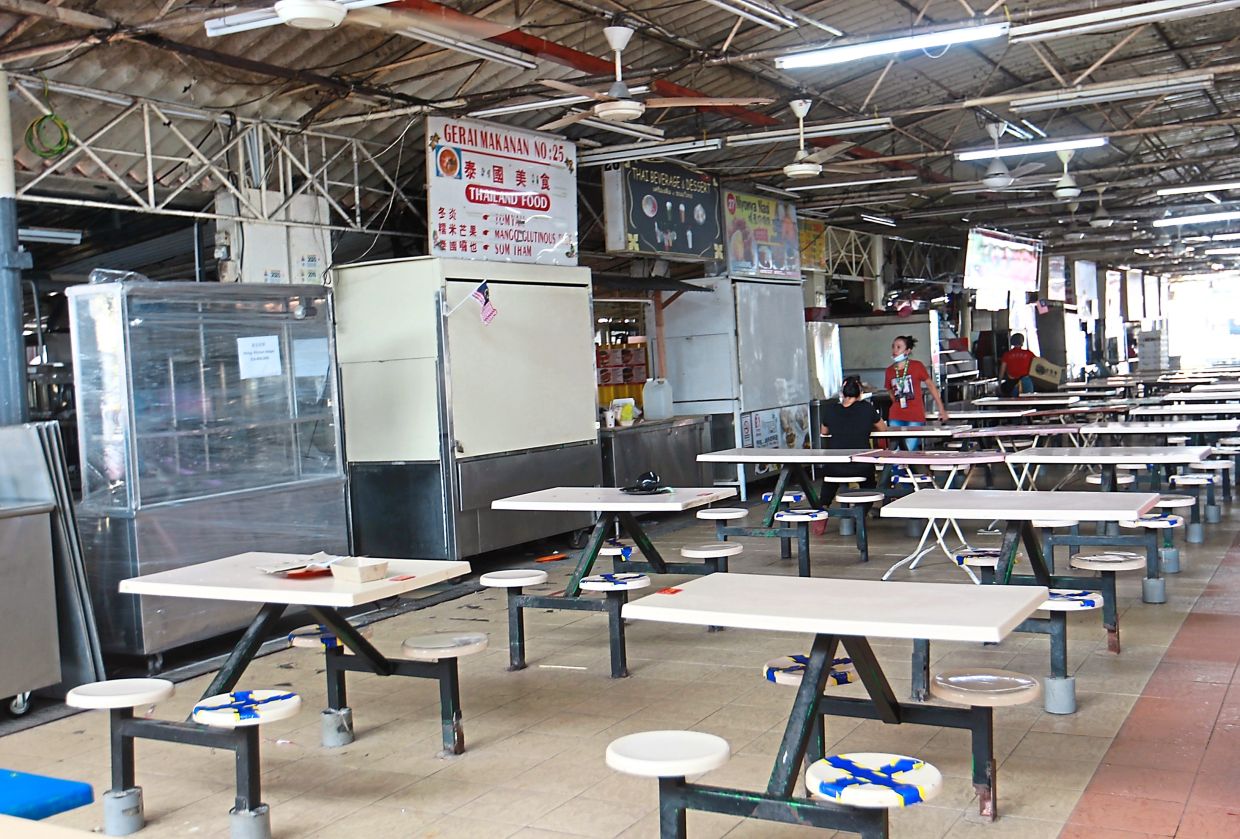 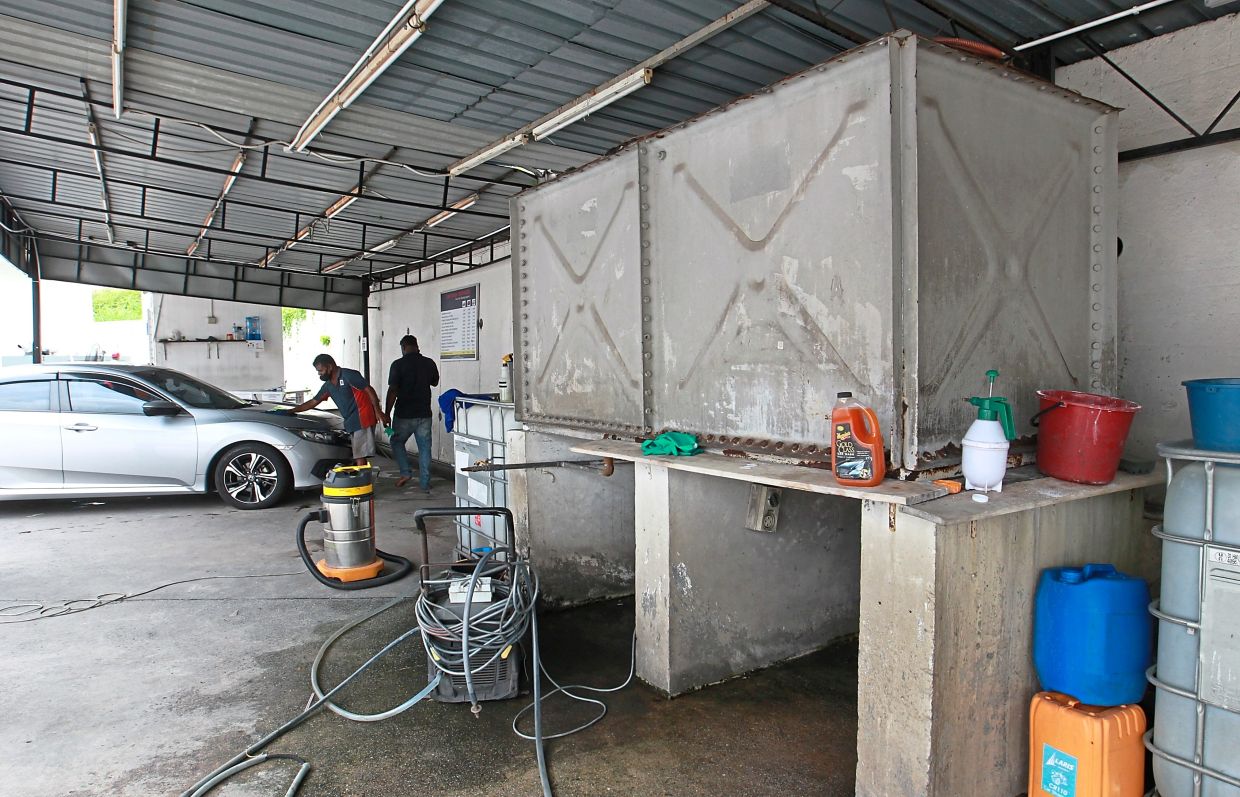 Disposable utensils, plates and cups are being used in eateries in Kampung Baru as many struggle to keep their businesses open following the unscheduled water cut that started on Thursday. — Photos: ART CHEN and MUHAMMAD SHAHRIL ROSLI/The Star

Bottles of drinking water was used to wash up plates at a chee cheong fan stall at the Selera Malam SS2 food court.

Most of the stalls at Selera Malam SS2 are closed due to the water cut.

Workers at Vinayagaa Autospa car wash kept the business open until the last drop of water.