He said that with assistance from Tenaga Nasional Berhad, they were able to disconnect the power supply to the sites under Section 21A(1) of the Common Gaming Houses Act 1953.

“We cut off electricity supply to these premises as the operators, despite having already been taken to court and prosecuted, still returned and carried out the same activities,” Supt Lee told reporters after witnessing the disconnection of electricity supply at Taman Bukit Panchor yesterday.

Supt Lee said that from January till Aug 17, they detained 79 individuals in 73 raids for involving in illegal lottery and online gambling activities.

He said they were investigated under Section 4A(a) and Section 4(1)(c) of the Common Gaming Houses Act 1953.

“A total of 55 cases were brought to court and the persons involved were charged and convicted.

“Besides the arrests, our men also seized items believed to be used in gambling activities, ” he added.

Supt Lee said they had been continuously monitoring and raiding premises suspected of conducting gambling activities.

“The operators will change their locations from time to time to avoid detection.

“Sometimes, they will operate at premises disguised as sundry shops and outlets selling handphones and other accessories.

“We need to take drastic action to combat these activities. The operators still carry on despite being raided many times, ” he said. 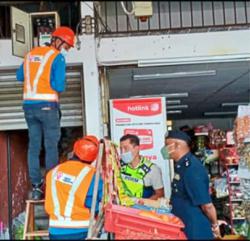