Change for the better

A shop owner seeing to public cleanliness by sweeping the walkway near his premises along Jalan Trus in downtown Johor Baru.

JOHOR BARU: The attitude of the people has a direct impact on growth and prosperity in the state.

Think City senior programme manager Daniel Lim said upgrading and beautification projects ongoing in downtown Johor Baru would not matter much if the people continued with bad habits such as littering and illegal parking.

He said factors that contributed to the overall improvement of an area were the level of enforcement by local authorities as well as how the community took charge of the place.

“Both physical and behavioural change should go hand-in-hand, which means if something is damaged, the community should report it to the authorities or even take the initiative to restore it.

“This strong sense of ownership within the community will change the dynamics of an area, creating a more harmonious community.

“With that being said, we do notice positive changes in the people’s attitude over the years.

“We see shopowners taking the effort to sweep the walkway in front of their premises, ” he said.

Lim explained that Think City, a social purpose organisation with the mission of making cities more people-friendly and liveable, had been in Johor Baru since 2016, focused on improving the public realm and enhancing the liveability of the city.

He said 99 projects --- both ongoing and completed --- largely in partnership with Johor Baru City Council (MBJB), had been carried out, including upgrading the façades of heritage buildings at Jalan Segget and improving walkways to provide safe and clean passage for pedestrians.

“The state government and agencies have been supportive of our work so far and we hope to continue because there has been an impact and change in downtown Johor Baru.

“Moving forward, we should also be looking at the kind of content Johor Baru can offer residents and visitors, for example places to go and things to do, ” said Lim.

Based on the organisation’s study and three-year report published last year, he said some of the potential content identified were related to culture, heritage and iconic buildings in the city.

“With all the existing features here such as the KTM Bhd train station, Meldrum Walk, Kwong Siew Association Heritage Gallery, Sungai Segget and Jalan Tan Hiok Nee just to name a few, the city has great potential to become more vibrant and attractive.

“We should also explore the possibility of turning the many vacant buildings into galleries or spaces to showcase local products and conduct programmes to encourage entrepreneurship as well as create a stronger identity for Johor Baru, ” he said.

It stated that the time and funding invested in the city initiatives would be unsustainable without public involvement and support.

The report states that part of the organisation’s key priorities in the next phase is to keep fostering opportunities for local communities and the private sector to engage with the city to make Johor Baru a better place for its citizens.

“The older part of Johor Baru such as Jalan Dhoby, Jalan Trus and Jalan Meldrum have their own unique history and attractions.

“We are also looking at Singapore’s Sultan Mosque and Istana Kampong Gelam as reference in our efforts to develop the areas mentioned, ” he said.

He added that the points of reference included cleanliness, landscaping and the content offered.

Ayub said a proposal would be submitted for the state’s 2021 budget with the aim of completing the projects by 2022. 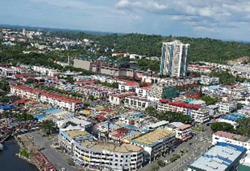