No leeway for foreigner-run illegal businesses

MPS officers seizing equipment and sealing off a grocery store built and run by foreigners without licence.

THE Selayang Municipal Council (MPS) is continuing its enforcement operations to ensure businesses abide by the local authority’s rules and regulations.

In its blitz against businesses illegally run by foreigners, the council raided five grocery shops in Selayang.

The shops were subsequently sealed for operating without licence.

“Based on the council’s observations a week prior to the raid, we learned that all five shops were owned by foreigners and they had set up their business illegally at the premises in question,” MPS Corporate Communications director Mohamad Zin Masoad said in a statement.

Some 30 enforcement officers were involved in the raid at three premises along Lorong Sri Tanjung, Kampung Sri Gombak Indah; one at Lorong Anggerik in front of Pangsapuri Mesra and another at Jalan TIB 3, Kampung Wira Damai.

Mohamad Zin said the raid was carried out under the Trade, Business and Industrial Licensing By-law (MPS) 2007.

“MPS will also take follow-up action by demolishing the illegal business premises, in line with Section 46(1)(a) and Section 70(1) of the Street, Drainage and Building Act 1974 (Act 133).

“The council will continue to take action against businesses operating without permit or licence, particularly those operated by foreigners, in all areas under MPS jurisdiction.”

In a separate enforcement operation, the council demolished a temporary structure built by a car workshop outside the premises.

MPS had received complaints about the illegal structure which posed an inconvenience to the public.

“MPS issued a notice on July 30 under Section 46(1)(a) of the Street, Drainage and Building Act 1974 (Act 133) for the car workshop owner to remove the obstruction,” said Mohamad Zin.

“When the owner failed to do so within the stipulated two weeks grace period, our enforcement officers moved in to demolish and remove the tent.”

Mohamad Zin reminded business proprietors and traders to obey the rules and conditions stipulated in their business licences, as well as to refrain from building or placing obstructions in public areas that would pose a nuisance or disturbance to the public. 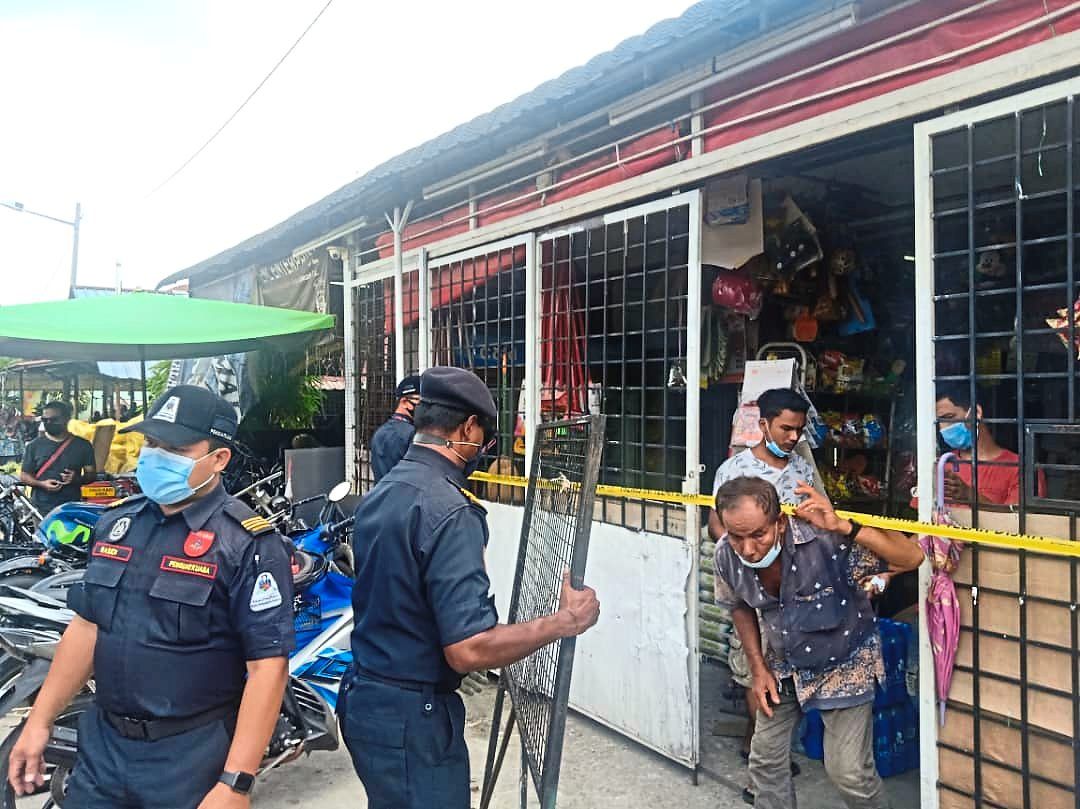 MPS officers seizing equipment and sealing off a grocery store built and run by foreigners without licence.

Selayang council's enforcement team is bent on looking for illegally run businesses in the municipality.

MPS enforcement team bringing down the canopy belonging to a car workshop, which had built the structure over several public parking bays.

Enforcement officers moved in to demolish the tent after giving notice to the shop but the tent was not removed.