Free from detention and back in business illegally

The seal placed around this shop by DBKL was broken by the foreign workers who were detained earlier. They have since resumed business.

ILLEGAL foreign traders caught several months ago in a joint raid by Kuala Lumpur City Hall (DBKL) and Immigration Department are back to carrying out illegal business at the previous premises.

A DBKL spokesman told StarMetro that after laying low for a few months, the culprits were back in action at the same place where they were detained and their goods confiscated.

The spokesman said enforcement officers had sealed the premises during the raids and pasted red closure notices.

“The illegal traders removed the seal as if nothing had happened and went about their business, ” he said, adding that the foreigners were getting bolder by the day.

“The locals who sold or sub-let their business to foreigners are protecting them.

“We are tipped off by residents in the surrounding area, who are equally fed up with the situation, ’’ the spokesman said. 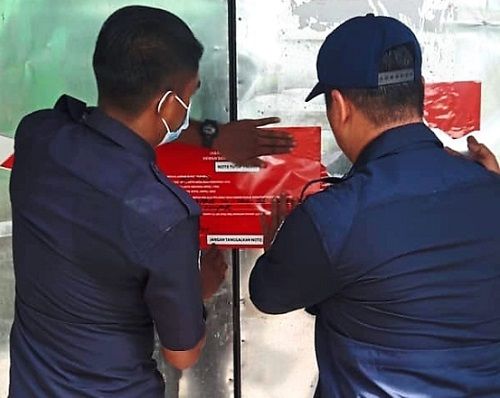 DBKL officers resealing a shop being operated illegally by foreigners with no permit.

StarMetro also learnt from DBKL that undocumented workers and those with expired permits placed at the Bukit Jalil Immigration depot, Kuala Lumpur, had been released and were now back on the streets doing business.

“Some of these foreigners with no documentation were sent there in April but were released due to lack of space, ” said the spokesman.

Since March 18, over 200 businesses that were operating illegally in Kuala Lumpur have been shut down and their items confiscated.

Shoplots, roadside stalls and outlets operating inside complexes were also raided by enforcement officers and sealed with yellow and red tape as a warning to those who break the law.

Raids are being held weekly in Cheras, Bukit Bintang, Kepong, Batu and Wangsa Maju, among others. In June, Home Minister Datuk Seri Hamzah Zainuddin said undocumented foreign workers might get a chance to be hired legally if plans to allow employers to hire those held at immigration depots went through.

He said the move would address the issue of employing foreigners without valid permits.

Hamzah added that the plan was to allow employers to look for prospective employees among illegal immigrants held at detention depots. The Immigration Department has nabbed 17,226 foreign illegals during operations conducted from January to June 15.

As at press time, StarMetro could not get comments from Immigration Department director-general Datuk Khairul Dzaimee Daud.