This signage of warning put up by the landowner is no deterrent to the culprits who dumped domestic and construction wastes at the site in Shah Alam. — Photos: SHAARI CHEMAT/The Star

THE rubbish pile that is visible from the Federal Highway near Batu Tiga is said to be linked to a construction site in Shah Alam.

A check by StarMetro recently found mounds of domestic and construction wastes at the site, causing an acrid stench to permeate the area.

Some waste from the site had spilled into an adjacent pond next to the the highway’s motorcycle lane, causing the water to turn brownish.

“The offender was fined RM1,000 for each of the lorries that were seized under the Rubbish Collection and Disposal by-laws (MBSA) 2007, ” he said.

He disclosed that the Selangor Housing and Property Board (LPHS), which owns the land, had been instructed to erect temporary hoarding around the site.

“A written notice has been issued to LPHS to clean up and transport the waste to the Jeram Sanitary Landfill in Kapar for disposal.”

Azlan added that the 1.62ha site had been earmarked for the development of two blocks of Rumah Selangorku comprising 620 apartment units.

LPHS development planning engineer Mohamed Alif Mohamed Roznan said the board had lodged a police report on the matter.

“We will rebuild the hoarding that came down during heavy rain a few weeks ago, and will start the clean-up soon, ” he said.

He added that the site had obtained a planning approval on July 9.

MBSA Environmental Health senior assistant officer Abdullah Md Yusof said the domestic refuse must be cleared and the construction waste needed to be sent to the landfill.

Pertubuhan Pelindung Khazanah Alam Malaysia (Peka) national chairman Puan Sri Shariffa Sabrina Syed Akil said the construction waste if left at the site might affect the soil structure, which would endanger the people who would be living in the apartments in the future.

“The pond is a popular spot among local anglers while also being home to many aquatic species, but has now turned brownish due to oxidation, ” he pointed out.

He expressed worry that effluent from the site might affect underground water.

Meanwhile water quality expert Dr Zaki Zainudin said domestic waste dumped into the pond would cause the level of dissolved oxygen (DO) in the water to deplete.

“If food waste and other perishable items are found in the rubbish, there is potential for organic substances, ammonia, nitrate and phosphorus to leak into the pond, especially during a downpour.

“The substances that leached into the pond will subsequently decay, thus lowering the level of DO, ” said Dr Zaki.

He explained that the presence of nitrate and phosphorus would also intensify algae growth in the pond.

“Although algae produce oxygen during the day, they take up more oxygen after dark, which will further reduce the water’s DO level.

“If the DO level gets too low, it will kill the fish, ” he said.

He added that the presence of other inorganic materials such as trace metals and solvents would harm the aquatic ecosystem.”

Dr Zaki said the sediments at the bottom of the pond must be inspected for waste residue.

“If there is residue, this needs to be excavated and sent to a sanitary landfill and the pond must be treated as well.

“Signage should be erected with the authority’s contacts to deter illegal dumpers and encourage participation of the local community in protecting the area against pollution, ” he added. 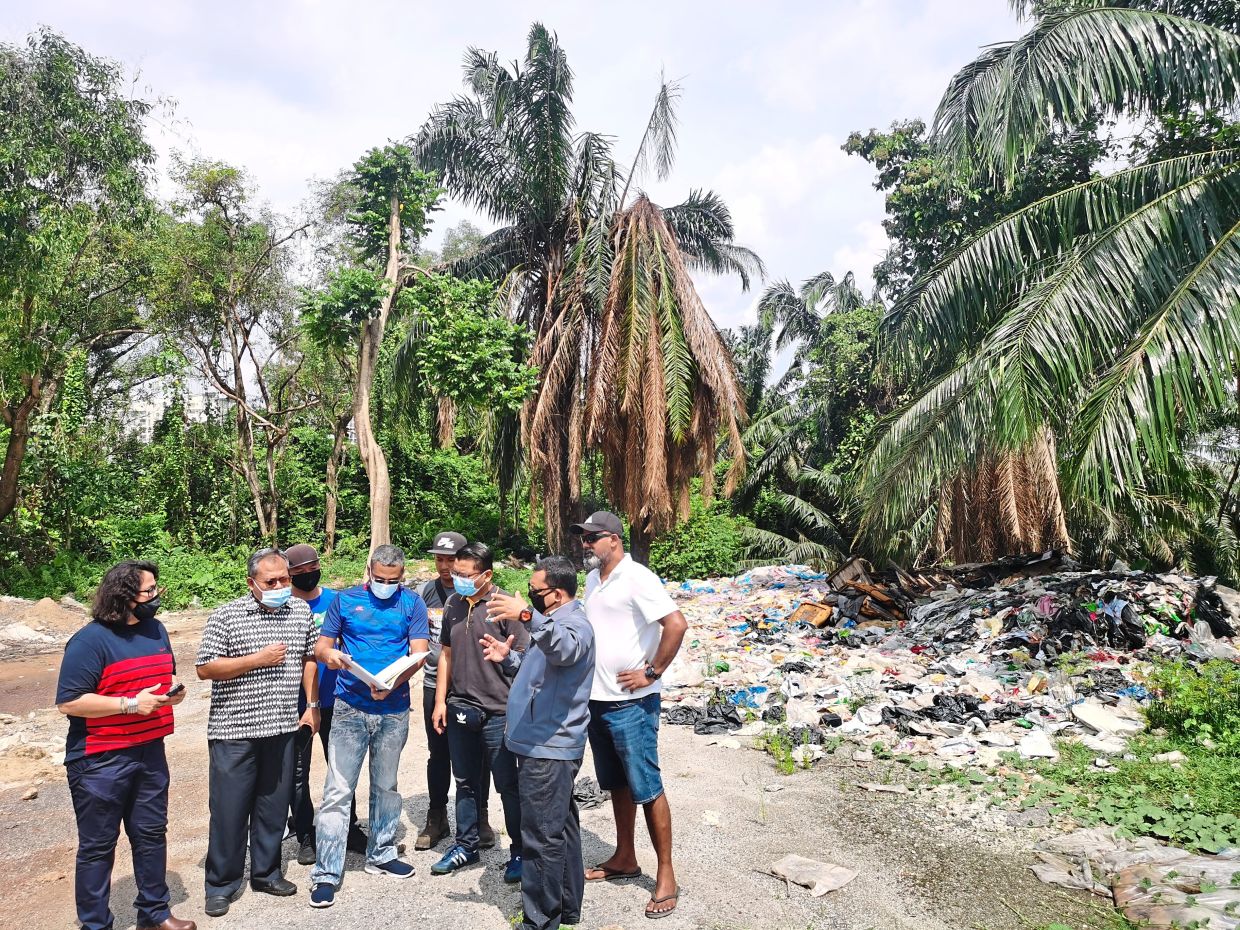 (From right) Damien, Azlan, Mohamed Alif, Abdullah and Norhayati (left) during their visit to the construction site in Shah Alam to check on illegal dumping at the place which caused an acrid stench.

The pond in Shah Alam next to the Federal Highway is a ghastly brown because of rubbish from an illegal dumpsite.