Large number of fans of the Reds gathered at Southkey here where they sang “You Never Walk Alone”, which is a song associated with the club and their fans from all around the world.

Among the activities held were games, a cake cutting ceremony and convoy of classic cars and superbikes going past while waving the club’s flags.

JLFC patron Datuk R. Sugumaran said that he has been a diehard Liverpool fan for the past 44 years.

“I remember back in 1976 when I was 15-year-old growing up in the estate where we shared a television with 15 other families just to watch Liverpool matches.

“Now, I am 61-years-old and retired but still my love for Liverpool will never fade,” he said, adding that the club’s motto of never give in and never give up had always resonated with him.

Johor Baru mayor Datuk Adib Azhari Daud, who was the guest-of-honour during the event, said just like Sugumaran, he too has always been a lifelong Liverpool fan.

“I was afraid that the English Premier League season might be cancelled due to the Covid-19 pandemic and we would not be able to watch the club end its 30-year wait for a league title.

“We have been dominant in this season’s Premier League to get the trophy that has eluded us for so many years and our wait has come to an end as the club finally became champions of England,” he said.

Meanwhile, JLFC president P. Magendran said that membership of the fan club had increased and currently they have more than 300 members from all over Johor.

“We are able to get many Liverpool supporters in Johor to join us through word of mouth as well as via our presence on social media.

“We have many plans in the near future including holding a football clinic at schools as Liverpool always puts emphasis on community,” he added. 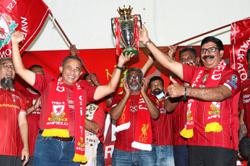