By BAVANI M. And SHALINI RAVINDRAN

The multi-million ringgit River of Life site is showing signs of ageing due to lack of maintenance.

IT IS likely that some of the 800 homeless people who were taken off the streets of Kuala Lumpur, in late March, are sleeping on the city’s sidewalks and benches again.

The homeless were relocated right after the movement control order (MCO) was first implemented.

Private tour guides who started their walking tours, this month, have seen vagrants sleeping on public benches and at tourist spots like the Masjid Jamek and nearby River of Life (RoL) Heritage Quarter.

“They are usually there early in the morning and in the late afternoons catching a nap under the trees and on benches as well as in the evenings, ” tour guide Jane Rai said.

Jane, who often sees the homeless sleeping on the streets during her walkabout sessions, described them as being, “part and parcel of a developing city”. 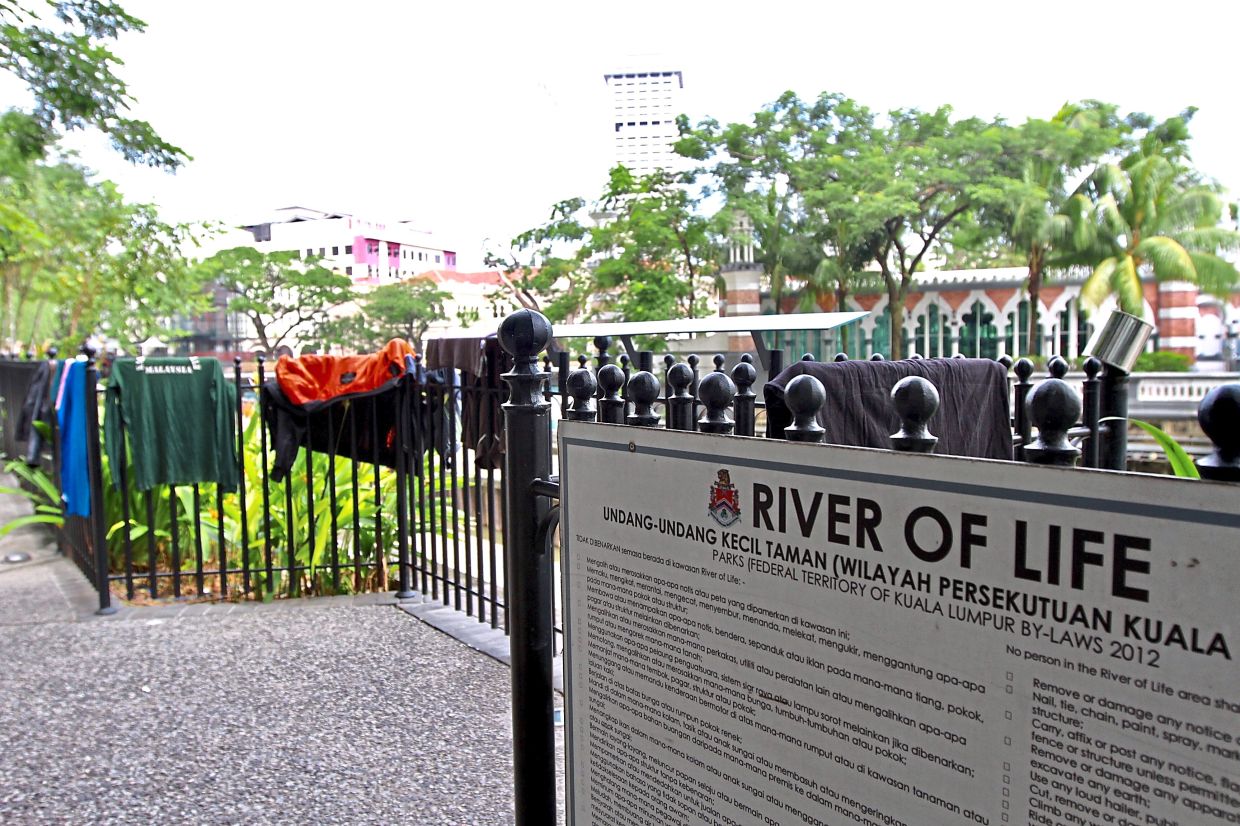 Clothes left to dry along the Heritage Quarter at the River of Life Project.

“I am sympathetic of their situation and they do not disturb us. Some will say ‘hi’ as we walk by, ” she said adding that some tourists would ask why the authorities were not doing anything about it.

“I tell them that they do but it is challenging.”

“Yes, the homeless are back as we see them all the time, ” another tour guide Stevie Chan said.

Members of the public have also noticed that luggage, bags, clothes and shoes belonging to the homeless were left on benches and shrubs all over the RoL areas.

Clothing belonging to the homeless group were also left to dry on fences and gates around the popular tourist spot. Chan says some parts of the Heritage Quarter are falling apart.

“They have made the area their personal living quarters, ’’ said Siti Aisha who works at a restaurant nearby.

“They use the fountains and public toilets nearby to wash and relieve themselves.

“Once the food distribution starts, more will come, ’’ added Siti.

A vagrant who was resting under a tree while waiting for his recently washed clothes to dry said he liked hanging out at the site as it was convenient.

“It is comfortable and clean. Besides all my friends are here, ” he said.

Meanwhile, both Jane and Chan also noticed that some parts of the Heritage Quarter area near Masjid Jamek, Sultan Abdul Samad building and the riverfront were falling apart.

The Heritage Quarter, they said, was barely two years old since it was launched.

It is ageing rapidly due to vandalism and lack of maintenance.

“Not a single fountain is working, and the mini water pools located all around the Masjid Jamek area have become stagnant with brackish water. These have become a likely breeding ground for mosquitoes, ” said Liz Tan, who works in a bank nearby. Jane says the homeless are now part and parcel of a developing city.

What was once a posh area is now looking worn out and old.

“The tiles are broken, the lovely Turkish fountains that were used as backdrop for wedding and fashion photography look shabby now, ’’ Tan said.

StarMetro visited the area recently and discovered many homeless folk sleeping in various nooks and corners in the area.

We also noticed that the popular tourist site that was named one of the Top 10 waterfront districts in the world by the United Kingdom’s Independent news portal last year, was looking distressed and faded.

Tiles were broken and fountains no longer in working order. Stagnant water, an ideal breeding ground for mosquitoes, had algae which marred the fountain’s beauty.

The red and blue Turkish tiles that used to beautify the fountains were either broken or missing, and appeared faded with age.

When StarMetro first reported on the condition last May, the authorities blamed it on vandalism.

Kuala Lumpur mayor Datuk Nor Hisham Ahmad Dahlan had said that the project contractor was supposed to fix defects during the defect liability period.

He added that damage caused by vandalism was beyond the contractor’s job scope. A group of people resting at this walkway along a row of shops in Jalan Petaling, Kuala Lumpur.

Nor Hisham had said that Kuala Lumpur City Hall (DBKL) would require additional budget to the tune of RM1mil to repair the damage, and was seeking funds from the Economic Planning Unit.

Should DBKL manage to secure the funds to carry out repair works, it will only be a short-term measure as there is no designated contractor or company to take over the management of the multi-million ringgit project.

It was also learned that the Federal Territories Ministry was looking at privatising the management of the Heritage Quarter to ensure the area does not become the city’s most expensive ‘white elephant’.

During the MCO, DBKL together with other agencies rescued some 800 homeless people from the streets and sent them to training camps to help them become independent.

In an interview recently, Nor Hisham said that almost 90% of the 800 homeless, who were rounded up when the MCO was implemented in March, were off the streets. “Some of the homeless are still undergoing rehabilitation programmes in Kuantan, while the Labour Department has coordinated efforts to find them jobs.

“At the moment, Yayasan Kebajikan Negara (YKN) has placed 88 of them at Anjung Singgah and at the Kuala Lumpur Transit Centre where they are waiting to be placed for jobs, ” he said. This once picturesque Turkish-inspired fountain, a popular backdrop for wedding photography, is not in working order and is a likely breeding ground for mosquitoes.

He added that DBKL spent more than RM1mil to set up the temporary transit centres, for their food as well as carrying out the various programmes since March.

However, in spite of efforts to keep them off the streets, DBKL has observed an emergence of homeless folk in the city since the recovery MCO started.

“With job losses due to the Covid-19 pandemic, many are coming into the city to try their luck to find work, ” he explained.

Nor Hisham added that there was not much that DBKL could do as the management of the homeless was under the jurisdiction of the Welfare Department which is parked under the Women, Family and Community Development Ministry.

He said ideally, shifting the responsibility of managing the homeless group to local authorities would lead to a more sustainable solution in the longer-term.

“In many countries and cities around the world, the issue of homelessness falls under the purview of City Hall but here this is not the case.

“So now DBKL can only provide assistance to the necessary agencies and departments when required, ” he said.