THE much-awaited unveiling of a time capsule in Putrajaya in conjunction with the administrative capital’s 25th-anniversary this year has been postponed.

The time capsule contains a number of official documents on the history and development of the city.

It was put into a purpose-built structure at Taman Putra Perdana, Precinct 1, on Aug 29,1995, by then prime minister Tun Dr Mahathir Mohamed, to commemorate the groundbreaking of Putrajaya.

Putrajaya Corporation (PjC) president Datuk Seri Dr Aminuddin Hassim said 90% of programmes planned for the city’s silver jubilee celebration have also been pushed to next year due to the Covid-19 outbreak, social distancing practises and compliance with standard operating procedures.

“Examples of some programmes that will take place this year are the release of Putrajaya’s 25th-anniversary commemorative coin and stamp, as well as Putrajaya Quran, which will not involve a large crowd.

“I foresee other events taking place in September and October on a small scale too. Upon request by the ministries for such events, we will see how we can make it happen according to the new norm.

“We are trying to avoid any event that involves gathering of people in big numbers until the end of the year, ” he said.

Commenting on the Auditor-General’s Report 2018 which stated that many Civil Servant Housing Scheme (PPAM) owners in Putrajaya were unhappy with the quality of the units, Aminuddin said PjC would use its funds to repair infrastructural problems such as faulty elevators and claim from the developer later.

On the issue of inadequate parking, he said the onus was on the house buyer to find a suitable parking space if they owned more than one car.

“Every unit is only provided with one parking lot. The problem is many units have more than one car causing it to spill over to non-parking areas.

"We understand the problem and will not issue compound or tow the vehicle away unless it obstructs traffic and emergency vehicles, ” he said. 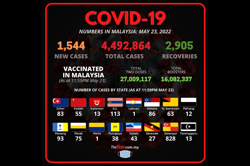