10,000 expected to benefit from training initiative

Selangor Kerjaya (Careers Selangor) is an initiative by the state government under its Third Economic Stimulus Package to assist those affected by the Covid-19 pandemic.

“The initiative will assist those who were laid off to be reskilled and upskilled for new jobs as well as train them for new roles, ” said Selangor Mentri Besar Datuk Seri Amirudin Shari.

In his statement on the stimulus package, he said Selangor Kerjaya was expected to benefit some 10,000 people in Selangor over three years, including training them for new jobs suited for the Fourth Industrial Revolution.

The initiative costs an estimated RM58mil.

“While the state government does not have a jobs database registration system, we have a working relationship with Jobs Malaysia, which has a website to search and match job opportunities for all Malaysians, ” said Amirudin, who is also state finance, land development and natural resource management, Islamic affairs, education and strategic communications committee chairman.

“Based on figures given by Labour Department to Invest Selangor, some 4,000 people lost their jobs (in Selangor) up until July, but that does not include the existing unemployment figures.

“Selangor’s unemployment rate is about 3.1%, compared to the national rate of 3.2%. However the actual unemployment figures and impact of the Covid-19 pandemic on the job market will only be known at the end of the year.”

Amirudin was responding to a question raised by Mohd Zawawi Ahmad Mughni (PKR-Sungai Kandis) on the number of people who lost jobs because of the movement control order (MCO) and whether the state government planned to have a jobs database registration system.

Mohd Zawawi later suggested that Selangor create its own job database or app -– similar to the Selangkah system -– as the state has the expertise and capability to do so.

Amirudin said this was not necessary as the jobs database system under Labour Department was effective and accurate.

“The state government is clear on ownership and hiring of workers for businesses in Selangor, ” said Amirudin.

“Local councils will continue enforcing their by-laws and take action against illegal traders in their jurisdiction.

“The actual figures on the number of illegal businesses run by foreign workers can only be derived later, as enforcement operations are still ongoing.

“But consumers can also play their part by not patronising such premises.” 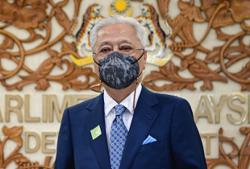