A student weaving a basket made from recycled materials at the association’s centre in Brickfields, Kuala Lumpur.

SELANGOR and Federal Territory Association for the Mentally Handicapped (SAMH) is selling items created by its students and staff online to raise funds.

SAMH is also selling vegetables grown by its students in Jinjang Utara and Klang.

The prices range from RM5 to RM50, except for the stools which cost more.

Krishnaveni said there were plans to list the items on more established e-commerce platforms.

“We will also create a website to sell the handicraft,” she said, adding that like many other organisations, SAMH received less donations due to the movement control order (MCO).

During earlier phases of the MCO, the association was unable to conduct fundraising activities at their schools.

“We usually hold a Flag Day every year and put up donation boxes in other schools.

“But we could not do it this year as schools were not open due to the MCO.”

SAMH is a charitable organisation that was established in 1964 to serve mentally challenged children and adults.

They receive training to improve their independent living skills as well as prepare them for the job market eventually.

Krishnaveni added that SAMH had also shifted to online learning during the MCO while physical classes resumed on July 1.

Another challenge faced by the association was getting raw materials to make the items, especially during earlier phases of the MCO.

“That is why we used materials that were easily available such as old clothes and newspapers.”

However, they still need to buy certain materials like glue and thread and are hoping individuals and organisations will come forward to donate these items.

“By purchasing our handicraft, the public is helping our association,” said Krishnaveni.

Ranging in age from two to over 18, the students diligently did their share of the work with assistance from their teachers — from cutting paper, rolling and arranging them, to weaving the threads or creating handprints.

Alinah Mawi, a teacher who is in charge of the vocational training programme, said the ultimate aim was to provide the students with skills they could use to earn an income.

“We train them at the vocational training centre where students aged 18 and above learn skills and do activities on a rotation basis to determine their aptitude and preference.

“We will channel them to perform work according to their ability and they can even work here permanently to obtain a steady income,” she said.

Aside from making crafts, the students also participate in activities such as swimming, bowling, singing and sports.

Other than providing vocational training, SAMH also takes in children aged seven to 17 under its school programme while the early intervention programme is designed for children aged six and below. 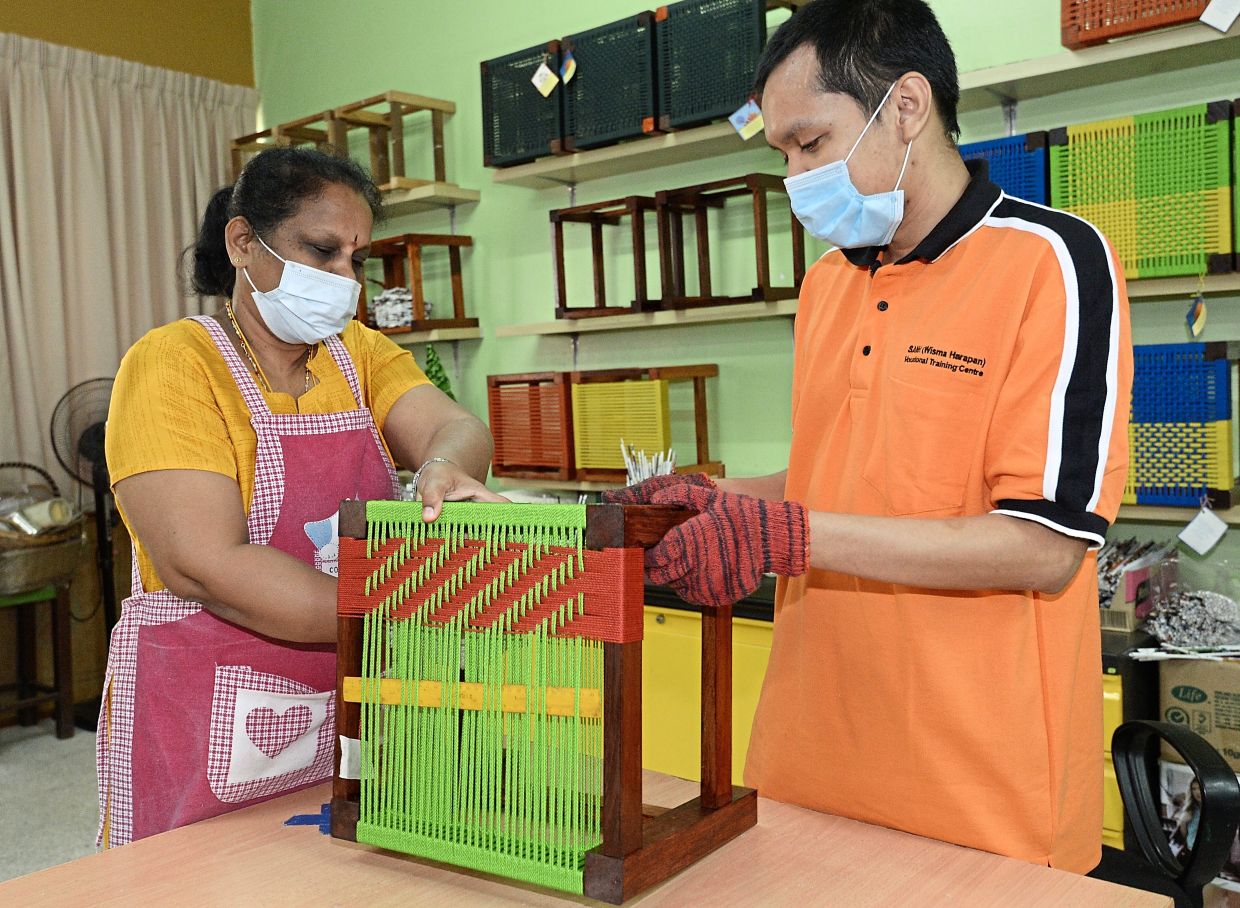 A student weaving a basket made from recycled materials at the association’s centre in Brickfields, Kuala Lumpur.

A child making handprints with the help of a teacher. — Photos: ONG SOON HIN/The Star

A teacher guiding a student to make a handmade stool which will be sold to raise funds for the association.