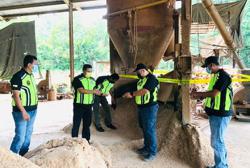 Believed to be the world’s oldest joss stick maker, the 92-year-old has devoted his life to the production of joss sticks which are widely used as offerings in temples and homes to the divine and for ancestral worship.

“I am happy and grateful to receive the award.

“I have been in this trade for more than 60 years,” he said during the award ceremony at Seven Terraces in Stewart Lane, George Town, on Tuesday.

Lee’s son, Lee Chin Poh, 59, said his father is the only traditional joss stick maker in Penang who still makes them by hand.

“My father is driven by his interest and passion to continue producing handmade joss sticks at this age.

“To make sure that his trade is preserved, we carry out workshops to introduce the trade to those who are interested. We have tourists from as far as Germany who came here to attend the workshop.

“We tried to improvise and upgrade the trade by introducing ingredients such as Artemisia argyi, which is commonly known as Chinese mugwort, Agarwood, Tibet Holy Grass and Frankincense instead of the usual sandalwood.

“The ingredients used are mostly organic and they are known to enhance good health, provide relaxation and wipe out negative energy,” he said.

Award convenor Loh-Lim Lin Lee said this was the 16th year since the awards started in 2004 by Penang Heritage Trust (PHT) to identify Penangites who carry skills that need to be acknowledged, documented, preserved and transmitted.

“The names of the award winners were nominated by the public and the final choices have been made by an independent, highly esteemed panel of judges,” she said.

The award ceremony saw eight other recipients who had exemplified the richness and wealth of skills in Penang.

Loh-Lim said recipients of the award would receive RM2,000 each per year for the remainder of their lives.

“There will be an additional one-time assistance of RM500 each for all recipients to aid with the Covid-19 challenges,” she said.