Desa Anggerik residents with the mock cheque of RM15,000 that they won in the landscape competition.

VISITORS to the Tasik Teratai 8 Timur Community Farm in Section 8, Shah Alam, are greeted by beautifully landscaped plots filled with lush vegetables and fruit trees, a testament to the hard work put in by the residents.

The farm, which is located on a hillslope under several Tenaga Nasional Bhd (TNB) pylons, plays multiple roles as it provides a harvest of greens for the residents’ consumption as well as income from selling the produce.

It is also a great source of pride for the community, providing an oasis of calm and beauty, especially during sunrise and sunset.

The first and second runners-up were Taman Desa Anggerik in Serendah, Selangor and Taman Mewah, Yong Peng in Johor, where the residents’ associations (RA) received RM15,000 and RM10,000 respectively.

The award is judged based on landscaping and residents’ involvement, with the money channelled back to the landscaping efforts in their neighbourhood.

JLN director-general Rotina Mohd Daik said the department had a Rakan Taman programme where each community would set up a team of volunteers to take care of their neighbourhood parks.

“They can cultivate a community farm or develop a playground in their neighbourhood.

“It is based on volunteerism and how they instil the landscaping culture in their neighbourhood.

“The department gives the RAs a small allocation to start their initiatives and guide them with their activities,” she said, adding that there were now around 150 registered Rakan Taman, with more residents encouraged to join the initiatives.

The award to Tasik Teratai 8 Timur Community Farm was a recognition to all residents who were involved in taking care of the park.

The path leading up to the farm has a recycled door at the entrance, with a sign titled “Seroja” (water lily in Bahasa Malaysia).

The pink water lilies are a highlight as they are flanked by several plots of spinach, asparagus, water crest and mustard greens.

“I have to start the generator to pump water up from the Shah Alam wetlands at the bottom of the hill to the entire farm,” said the 63-year-old retiree.

The two-hectare farm is considered a second home for some 30 RA members who have their respective plots here.

“Gardening is the best way to bring people together and they can also plant their crops, harvest and sell it at the market.

“It is a satisfying feeling which people from all walks of life can experience.

“To-date, we have people from diverse backgrounds, including an expatriate from Japan who has become a member of the farming community,” he said.

The idea to have a community farm started when the RA wanted its members to have healthy space for leisure activities.

“In 2014, we received the green light from the city council who also helped us to level the land.

“This is the pioneer urban community farm in Shah Alam which has also become the role model for residents of other zones under MBSA’s jurisdiction, inspiring them to start their own community farm,” he said, adding that there were more than 20 urban farms now under the city council’s jurisdiction.

One of the challenges that the residents face on the farm is pests.

“We do not use pesticide; all we do is mix vinegar and chillies to ward off insects but that is not an effective method.

“Yet, we have to maintain its pesticide-free status,” said Zainuddin.

He said the prize money would help them to continue improving the landscaping at the farm and purchase ploughing machines.

“This includes planting flowers and doing up the pavement so that the farm can be turned into an ecotourism attraction,” he said. Beauty in recycling

Meanwhile, at Desa Anggerik, Serendah, recycled items have been used to beautify the neighbourhood.

Used tyres have been transformed into animal-shaped decor and flower pots at the entrance of Jalan Anggerik 1F, while used plastic bottles line the neighbourhood’s road reserve.

“It is all about recycled items when it comes to beautifying the place.

“We do it together and decorate from one lane to another lane,” said Desa Anggerik RA chairman Abdul Hamid Abu Bakar.

In the neighbourhood, each lane sports a unique design based on the collective ideas of the residents.

To take the recycling concept further, residents use drain water to water the plants.

The neighbourhood has also become a case study for Universiti Islam Antarabangsa Malaysia (UIAM), Selangor, where the undergraduates proposed a community masterplan guideline on landscaping for the Hulu Selangor District Council.

“When the RA was established in 2018, there were not many activities that involved residents.

“So, we started an internal competition for house owners to compete with each other by beautifying their compound.

“In April last year, the council had a landscaping competition and we joined in as a neighbourhood and won first prize.

“The council then encouraged us to participate in the national-level competition organised by JLN and we won second place,” he said.

Abdul Hamid said such initiatives had created an awareness among the people to beautify their neighbourhood.

“The impact is clear, our roads have become cleaner as people take better care of how their place looks.

“Bushes have been cleared, the crime rate has come down, and community relations has been strengthened,” he said, adding that they would continue to improve the landscaping as it helped to promote tourism in the area and make it a conducive place to live.

Hulu Selangor District Council Landscape Department director Mohd Fadhil Mohd Lani said the neighbourhood could act as a mentor for other neighbourhoods when they organise their district-level landscaping competition.

“We hope that Desa Anggerik can be a role model for other neighbourhoods,” he said.

“Vegetables such as long beans, chillies and eggplants that we plant in the farm are sold at the market and part of the proceeds go towards helping the needy.

“It is also a self-sustaining effort for the RA as the profits we make from the sale of vegetables will go into the RT’s joint account to fund our yearly community events, such as gotong-royong.

“Besides, it also strengthens the bond among residents when they care for the farm together,” she said. 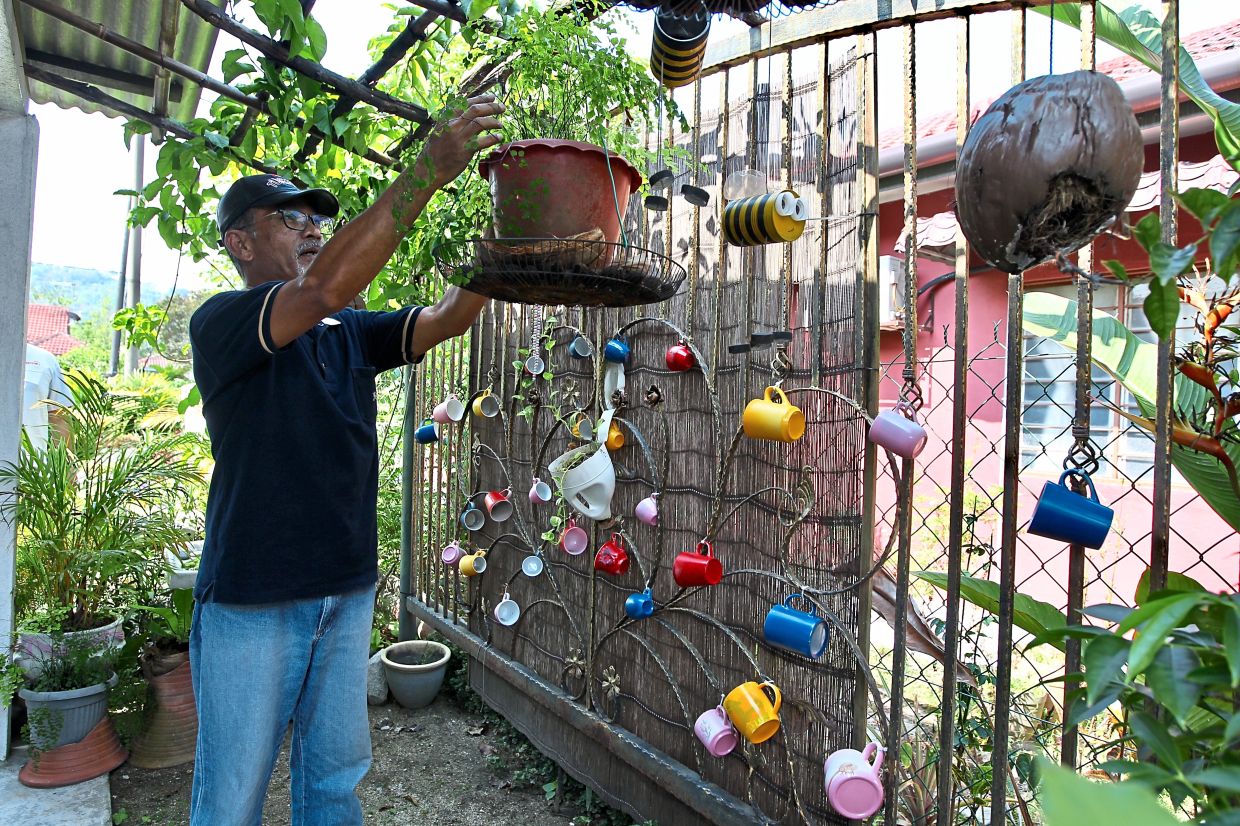 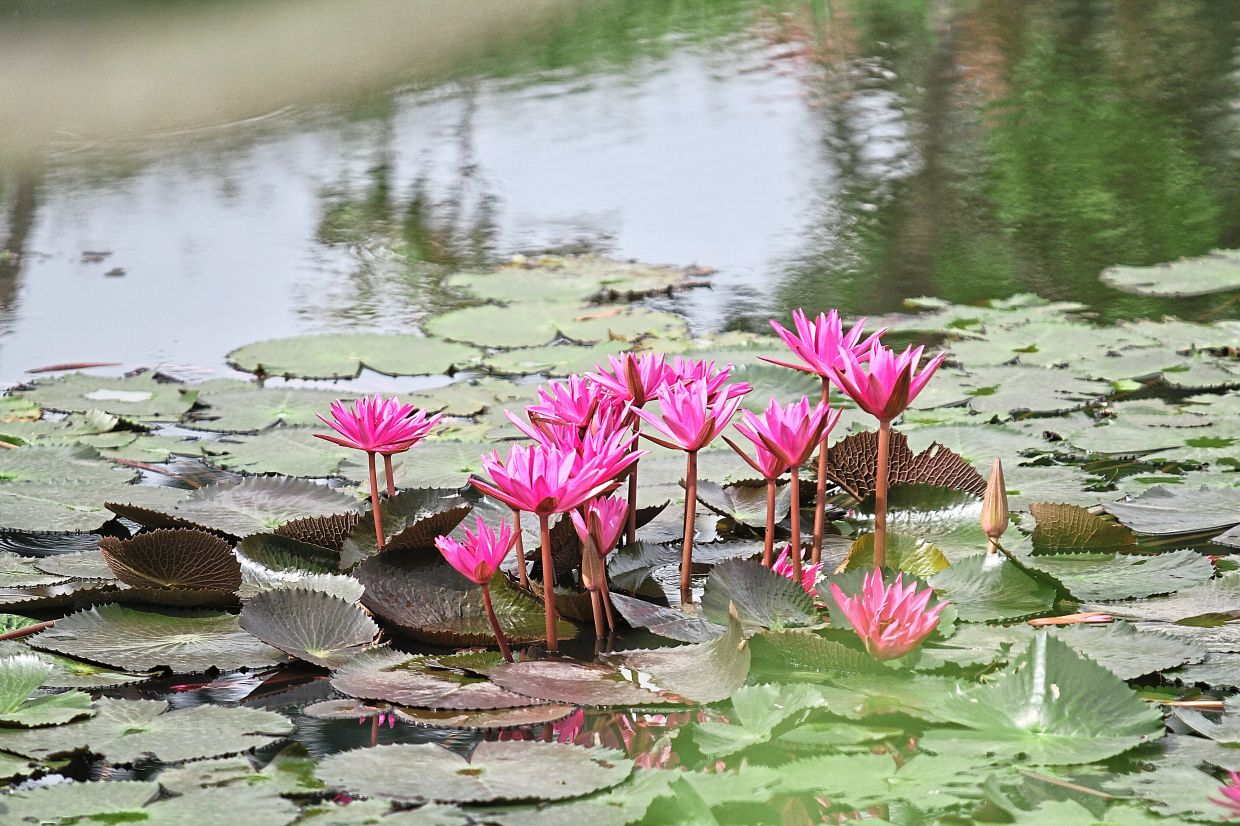 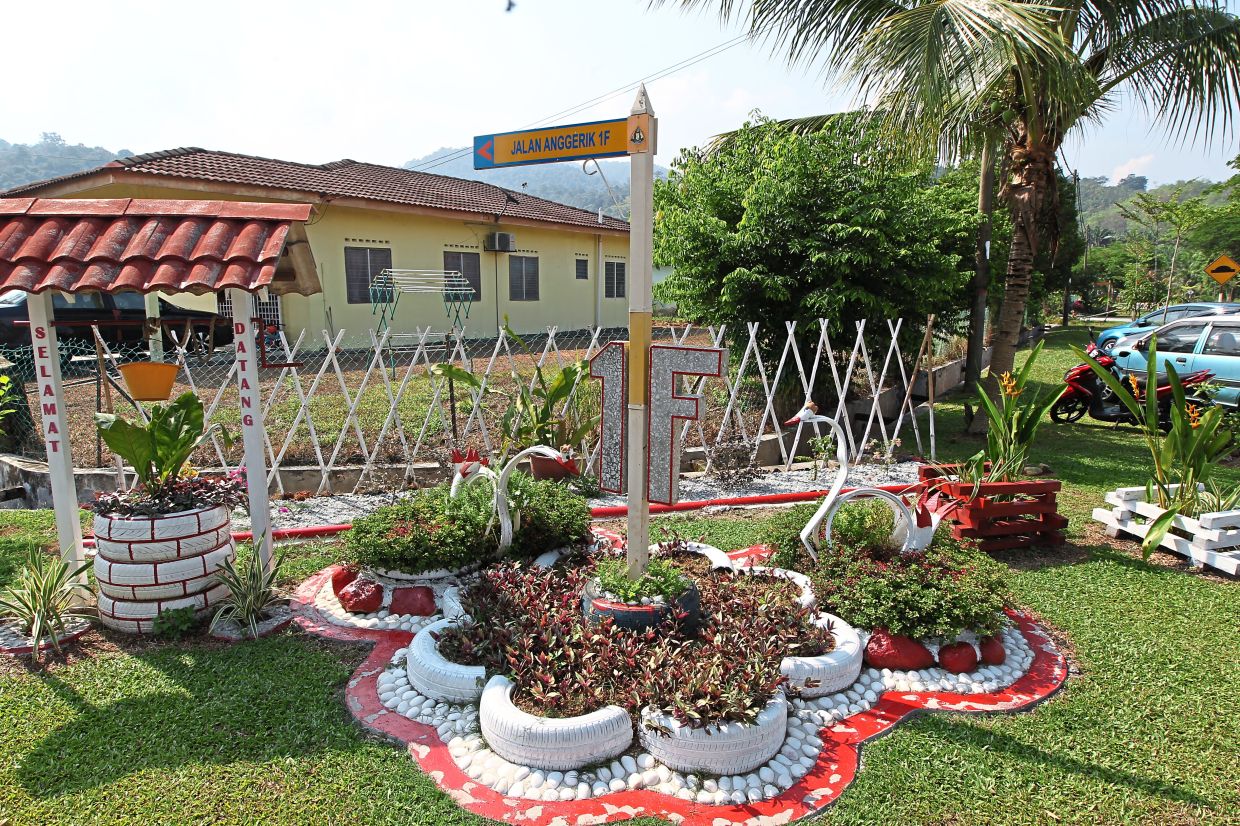 Desa Anggerik residents with the mock cheque of RM15,000 that they won in the landscape competition.

An array of vegetables planted in the Taman Mewah community farm in Yong Peng, Johor. The farm emerged second runner-up in the competition.

Zainuddin checking on the plants at the community garden in Section 8, Shah Alam.

(from left) Gunaseelan Seernyanathan, 38 manning his plot of vegetables and corn with his nephew Haresh, 14, and Kushagraa Rejani, 5. at the community farm in Shah Alam.

Water lilies are one of the attractions at the community farm in Section 8, Shah Alam.

Old tyres are repurposed and turned into geese shaped containers to hold soil to plant flowers by the roadside in Taman Desa Anggerik, Serendah.