Sarawak Fire and Rescue Department personnel in Long Panai settlement in Baram district which was hit by floods.

MIRI: Floods are inundating the interior parts of three districts in northern Sarawak.

Sarawak Fire and Rescue Department, in an update on conditions in flood-hit areas, said downpours starting from Sunday had caused the floods.

It said in Limbang district, villages in Ukong and Medamit were under 0.7m of water.

In Marudi and Baram districts, the badly-hit areas are SK Long Bemang, SK Long Panai and SK Long Tutoh where the classrooms, school halls and teachers’ quarters were inundated, with floodwaters reaching about 0.7m-high.

The teachers’ housing block at SK Long Bemang was submerged in about 1.3m of water.

“The water is rising due to heavy rain in the interior, ” said the department.

It assured that its rescue units were prepared to handle the situation.

It added that personnel were stationed in flood-prone areas to help residents and ensure their safety. – By STEPHEN THEN 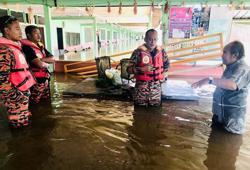 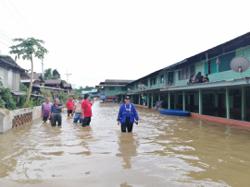