Ting (left) and Chieng (right) presenting the plans for the Youth innovation centre to Abang Johari (second from left) and Dr Sim.

SIBU: A Sibu Youth Innovation Centre will be built as one of the projects under the Sibu Urban Renewal Master Plan.

“This is the first project under the master plan and I have received a letter of approval from Abang Johari and the state Economic Planning Unit, ” said Chieng.

The project, he explained, would be sited at the Sibu Trade and Exhibition Centre and a consultant would be appointed soon to facilitate its implementation.

“The exhibition centre will be renovated to accommodate the new project. We hope to complete it in one year’s time, ” he said.

He said the centre would be used to train youths and increase their innovative and creative skills.

“Presently, we do not have such a facility, ” said Chieng. 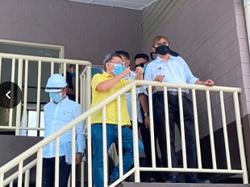