Open-air mass with Miri Catholics at Church of Mater Dei in Lutong bazaar.

MIRI: Catholic parishioners in Miri celebrated their first Sunday mass in three months inside parked cars in an open-air mass at Church of Mater Dei in Lutong bazaar.

Head of Miri Diocese, Bishop Richard Ng, presided over the mass with parishioners seated inside their cars which are parked at least two metres apart in adherence to social distancing measures. There were at least 50 cars in the carpark.

Bishop Ng celebrated the mass on a stage, with loudspeakers set up to enable those inside their cars to hear him and follow the prayers.

He later told StarMetro that this is the first such open-air mass inside parked cars in Miri and Sarawak.

“This is definitely the first time Sunday mass is done in such a way in Miri and Sarawak and possibly even in Malaysia.

“We in Miri Diocese will continue with such form of masses as long as the Covid-19 pandemic is still a threat.

“Such a way of celebrating mass will ensure safe social distancing, ” he said when interviewed.

Bishop Ng also called on Catholics to show compassion and help those badly affected by the pandemic who are in need of material assistance and food.

Elsewhere in Miri, masses were also held in churches and chapels but with reduced capacity of maximum 100 parishioners. — By STEPHEN THEN 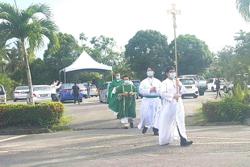 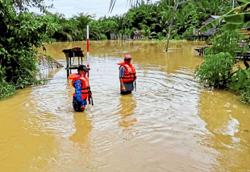 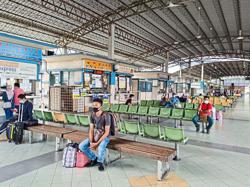