Second-hand computers snapped up by students

A family checking out a second-hand desktop for sale at Penang Science Cluster.

MORE than 200 second-hand desktops, demo tablets or notebooks were offered to needy families at an event held at Penang Science Cluster.

The items were offered at promotional prices ranging from RM99 for a tablet to RM1,199 for a notebook.

This was part of a company’s corporate social responsibility programme in supporting the state’s E-Learning Computer Programme.

Penang women and family development committee chairman Chong Eng, who was overseeing the programme, said the state government wanted to give every student an equal opportunity to take part in the e-learning programme.

“Since the programme was launched on May 21, we’ve received more than 1,000 applications from students.

“We’ve asked schools to give us a list of students who do not have computers, ” she said in her speech at the event.

“So far, we have given out 200 second-hand computers that we refurbished.

“At the same time, we’ve lent 100 new computers to students to use for six months.

“Priority is given to students facing examinations like STPM and SPM this year.

“We also give priority to those from very poor, large or single- parent families and have achieved reasonably good academic results.

Meanwhile, Chong Eng said they would also consider applications from some parents who, for instance, may earn between RM6,000 and RM8,000 but have five school-going children.

“Today’s event is for those families who are able to buy computers at discounted prices rather than wait for free second-hand computers or loans from us, ” she explained.

Chong Eng expressed hoped that more companies would join in to support the project. 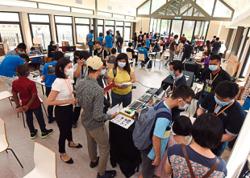