A sight for sore eyes

A view of the mini park near Convent Green Lane in Jalan Masjid Negeri.

IF you happen to drive by Batu Lanchang area in Penang, make sure to look out for the beautiful flowers at the mini parks by the roadside.

Batu Lanchang assemblyman Ong Ah Teong said the flowers were planted not only to enhance the scenery but also to bring calmness to road users. A gardener trimming flowers at the mini park near Convent Green Lane.

“The mini parks are divided into three phases and it will cost around RM40,000 for the project.

“For phase one, we decorated the junction in front of the Jalan Perak government health clinic.

“In phase two, we recently planted many flowers at the mini park in front of Convent Green Lane.

“We began phase two of the project at the end of February but due to the movement control order, things were put on hold.

“The project was stopped for about two months as we could not water and fertilise the plants.

“For phase three of the project, we will plant flowers at the junction in front of Lam Wah Ee Hospital and the junction before Batu Lanchang market. Ong says there are plans to plant more sunflowers with the hope of spreading positivity besides beautifying the area.

“We hope that the project will be completed by next month.

“We trimmed the bushes into the shape of Mickey Mouse at the junction from Jalan Masjid Negeri heading to Batu Lanchang market to mark the Year of the Rat.

“Through this initiative, we hope that road users will be more relaxed on the road with nice scenery, ” he said.

Ong urged the public to take good care of the mini parks and to refrain from plucking the flowers.

“There were irresponsible people who did pluck the flowers and we hope that they do not do that so that other people can enjoy the beautiful scenery.

“We plan to plant more sunflowers with the hope of spreading positivity besides beautifying the area, ” he added. Bushes trimmed into the shape of Mickey Mouse at the junction from Jalan Masjid Negeri heading to Batu Lanchang market to mark the Year of the Rat. 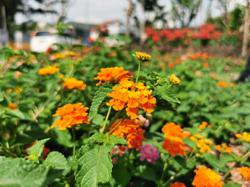 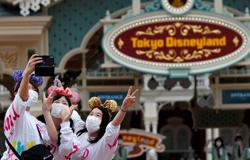 Mickey Mouse fans 'over the moon' as Tokyo Disney reopens