THE mushrooming of illegal dumpsites is a perennial problem in Ipoh.

These have not only become an eyesore, but contribute to the rise in dengue and chikungunya cases.

Ipoh mayor Datuk Rumaizi Baharin said as of May 31,1, 672 illegal dumpsites had been identified under the city council’s jurisdiction.

He said the city council had carried out cleaning work frequently from January to May 31, where 12,210 tonnes of rubbish were collected.

However, litterbugs continued to discard items such as old furniture, mattresses, toilet bowls and heaps of rubbish indiscriminately.

Rumaizi warned that the city council would consider taking the litterbugs to court to face stiffer penalties, as the maximum compound of RM1,000 was ineffective.

Ipoh city councillor Dr Richard Ng said illegal dumping was still rampant in Ipoh, although the Perak government was making every effort to beautify the city as a tourist attraction. Ng, who is also president of Ipoh City Watch, a non-governmental organisation (NGO) that aims to create a sustainable and liveable city, said it boiled down to the bad attitude of some residents who choose to dump their rubbish indiscriminately despite the many signboards put up by city council.

“Our anti-littering and enforcement units have caught the illegal dumping culprits and issued summonses.

“Between January to May 31, over 200 people and companies were caught and fined.

“We have also stepped up enforcement to ensure the number of illegal dumpsites is reduced, ” he added.

“Their attitude needs to change, ” he said.

As the councillor entrusted to take charge of environmental issues, Ng said he would embark on a campaign to cultivate the habit of recycling including separating rubbish and practising composting among students.

“Contractors hired by the city council to clean drains and cut grass should not leave behind the remnants at a certain area, only to be collected days later, because the public will do the same thing, ” he said.

Naran said strict enforcement was also important, and urged the public to be the eyes and ears for the city council in preventing illegal dumpsites. 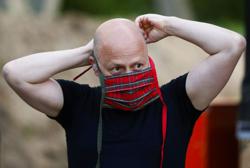