Singing the blues over long closure

BUSINESS owners that are not allowed to operate during the recovery movement control order (MCO) period are hoping that the Federal Government would allow them to resume operations soon.

They hope that the government would look into their plight as they pledge to adhere to necessary standard operating procedures (SOPs).

Reflexology massage centre owner Loke Thiam Hua, 52, said in his 30 over years in the industry, this was the first time he had to stop operations for three months.

“I have a few branches in Penang and around 60 employees but we have closed since the MCO started on March 18.

“To pay salary to my workers and have to fork out my own money.

“If the situation goes on, I may be forced to close down my branches, ” he said when met at his shop on Monday.

Loke added that foot massage should be allowed to operate as customers and masseurs could keep to a safe distance during the sessions.

“There will be at least 1m distance between the customers and masseur during foot reflexology sessions as the customers are seated away from the masseur. “Before the massage session begins, we make sure our customers wash their feet with warm water.

“After every massage session, we will sanitise the seats.

“I agree that full body massage should not be allowed for now, but at least, let us do foot reflexology.

“I do not understand why manicure and pedicure is allowed, but reflexology is not.

“We hope that the government can look into this matter, provide us with the SOP and we will strictly adhere to them as we are also worried about our own safety.

“There are customers, especially senior citizens who need massages urgently as they have poor blood circulation and aches, ” he said.

Masseur Koay Hon Yow, 57, said he is thankful that he still receives his basic salary during the MCO and conditional MCO.

“Since the reflexology and massage centre is still not open, we do not get any commission.

“During good times, we get to take home RM2,000 extra from our commission as I serve at least ;four customers every day.

“I have to pay for my family’s living expenses with basic salary as my wife is unemployed. 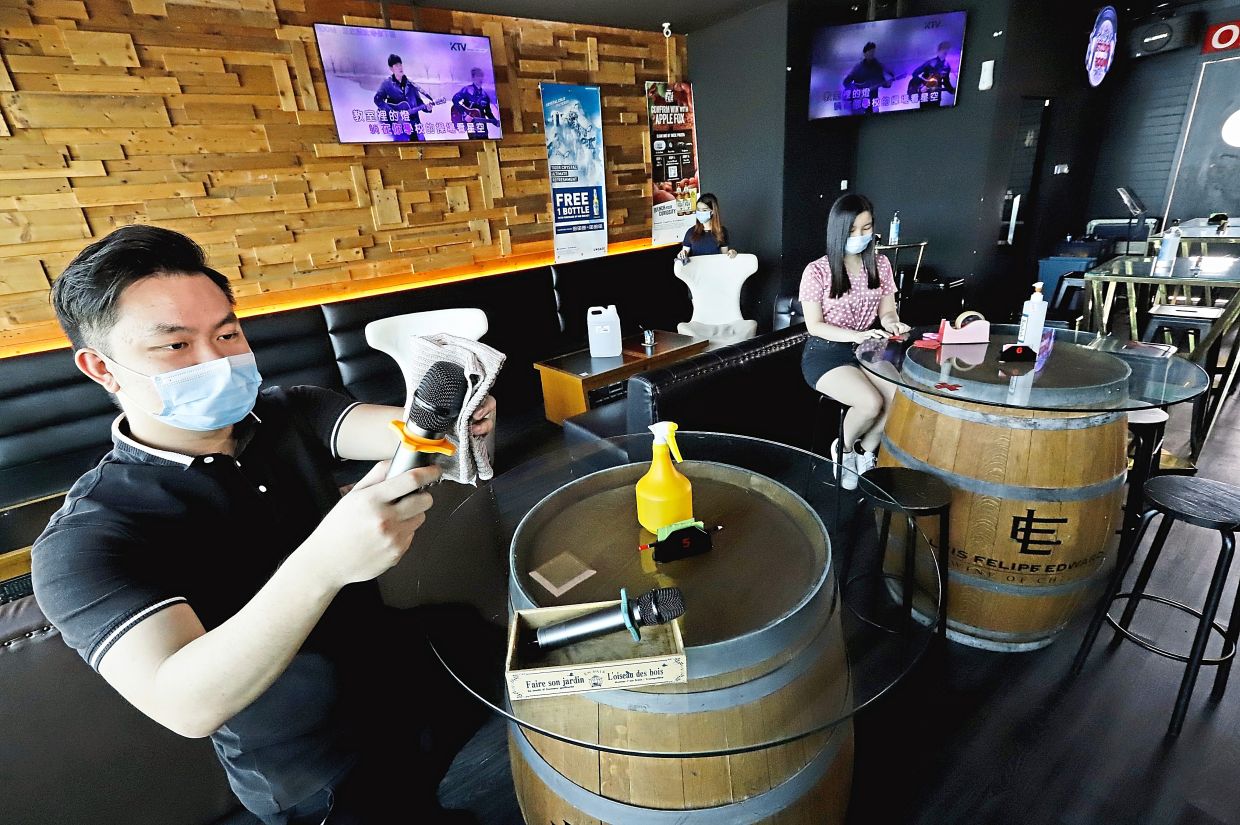 Lee says with no income from his karaoke business, he turned to delivery services but later gave up due to low profit.

“As Penang is a green zone for Covid-19, I am not worried to start working again.

“As long as we keep personal hygiene and sanitise ourselves frequently, it should be all right.

“We will deny customers with any symptoms and will check their temperature before allowing them to come in, ” he said, adding that he has been in the industry for 13 years.

A karaoke centre owner Lee Han Win, 24, said his shop had been closed since the MCO was announced.

“We have been shut for almost three months.

“Alternatively, we tried doing delivery services, but the income was low, so I decided to stop it.

“My employees received full salary in March but I adjusted their salaries for April and May as we did not get any income, ” he said.

Lee hoped that his open lounge karaoke would be allowed to operate again as there have been no new Covid-19 cases in the state for more than a month already.

“We will follow the SOP such as practising social distancing, checking customers’ temperatures and providing hand sanitiser besides disinfecting our equipment frequently.

“If we remain closed, there will be no income at all, ” Lee lamented.