IN A bid to raise funds to sustain operations, St Nicholas Home in Penang is selling pastries to the public.

She said the home’s wellness centre, which offered massage services, was closed due to the movement control order (MCO).

“Therefore, selling pastries is our only way of generating revenue.

“These pastries are handmade by our residents who are visually impaired but well-trained in baking,” she said, adding that they baked the pastries until the day before Hari Raya Aidilfitri.

The public can order these pastries from the home.

They can collect and pay for the pastries at the home in Jalan Bagan Jermal, George Town.

The home’s general manager David Chiang said following an 80% drop in public donations since the start of the MCO in March, the home was facing financial constraints.

“Under current conditions, we are expecting donations to continue to decline until next year. We are a non-governmental organisation that depends on public donations.

“Before the MCO, we received a lot of walk-in donors but now, the number has declined tremendously,” said Chiang,

adding that they now rely on online platforms to receive donations.

Chiang hoped the public would donate to donate to sustain the home’s operations.

For the past 90 years, St Nicholas Home has been assisting the blind and visually impaired regardless of race, religion, creed or age.

Initially established as an orphanage in 1926, the home has since grown to become a fully residential training centre. 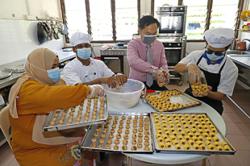 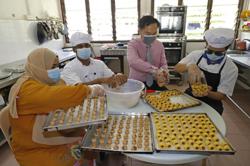 Seeking at end of tunnel