Arif helping to decorate the porch wall of his brother-in-law’s house for Hari Raya Aidilfitri.

ABDUL Rahman Packeer, 36, has always celebrated Hari Raya Aidilfitri in a big way. His family would head from Kuala Lumpur to Ipoh for the celebration annually.

Except for this year. Just like other families in the country, he is unable to balik kampung due to the movement control order (MCO).

In place of the customary festive journey, he along with wife Elya Syireen Abdul Harith, his sister Julaiha Nazreen and brother-in-law Arif Anvar decided to create a “photo booth” in the porch of his house in Bangsar.

Abdul Rahman, who also lives with his elderly father, said he furnished the porch with a table, chairs and a swing, as well as decorated the place with plastic flowers and lights.

He explained that the area was done up to receive guests consisting of family and a few close friends.

“I have to protect my dad, so the rule is that visitors cannot go into the house. 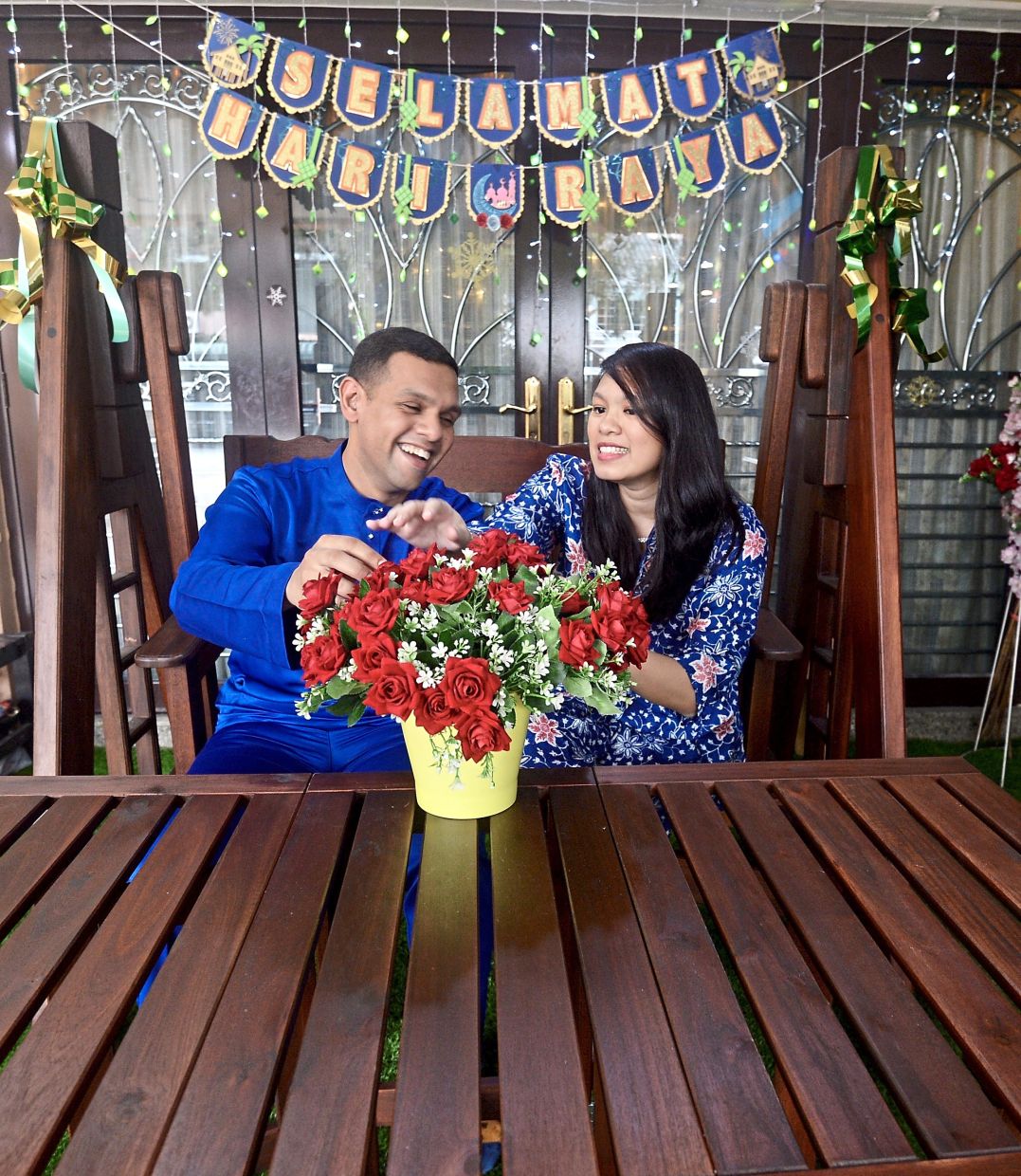 “We have informed our relatives and friends to make the exception by not visiting this year, ” he said.

His sister, who enjoys crafting art and decorations, made the Hari Raya banner instead of buying it. The family spent close to RM1,000 on beautifying the porch.

“The twinkle lights that were easily available before, were difficult to find this year due to the MCO, ” said Abdul Rahman.

“When we finally found the lights, they were exorbitantly priced but we still bought them because I take celebrating Hari Raya seriously.

“And I just wanted to console myself when I could not go back to my kampung.

“Even the artificial flowers were hard to get and were expensive. We spent on those things since we saved on other Hari Raya expenses such as travel costs and duit raya, ” he said, and jokingly added that they would also miss out on duit raya from their uncles and aunts.

Abdul Rahman admitted that he was sorely disappointed he could not make the trip to his father’s hometown.

“For over 30 years, I have been celebrating Raya at my paternal grandfather’s house.

“About 30 of us including cousins would gather there. This year is the first time we cannot meet and it does bother me, ” he said.

He said the must-have for Hari Raya was the chicken curry cooked by his aunt, besides idiyappam.

“I look forward to Syawal just to enjoy this chicken curry made by my aunt.

“She came over to our house on the first day of Hari Raya and cooked for us.”

Abdul Rahman said his family took social distancing and hygiene very seriously as they were concerned for their aged father.

“We have face masks and hand sanitiser as well as soap. I am sanitising my hands almost every hour; that has become the new norm.

“We are a big family but we understand the need to be safe for the sake of everyone’s well-being, ” he added.