Nur Amalina is happy to be able to spend time with her three children on the first day of Raya, although she worries about husband Ady Hafizal, who is on standby for raids on premises conducting illicit activities.

HARI Raya Adilfitri this year will be one for the books for most Muslims, with balik kampung prohibited and house visits among relatives and friends highly discouraged in light of Covid-19.

And to keep peace and order under the conditional movement control order (MCO), many Muslim police personnel will celebrate Raya while on duty.

StarMetro spoke to three couples on what is in store for them this Raya.

For Corporal Nur Amalina Ishak, 35, not a day goes by when she does not worry for the safety of her husband, Ady Hafizal Ahmad Hashim, who is also a police corporal.

“My husband is regularly called to duty for midnight raids on premises that conduct illicit activities, such as massage parlours and karaoke centres.

“During the MCO, he reports for duty if there is any report received on such premises operating, ” she said, adding that her husband was also regularly tasked with manning roadblocks. 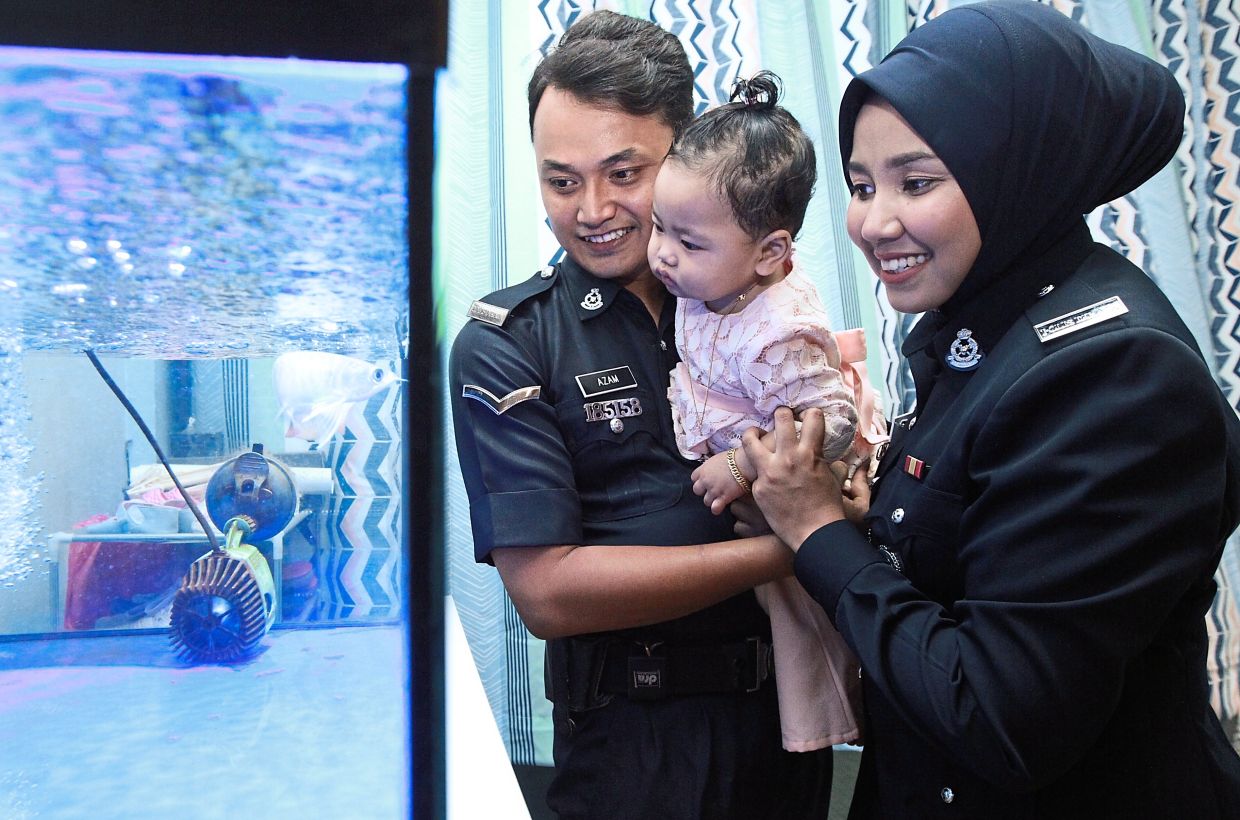 Samniatun and Azam will leave their child with a neighbour if they are required to work during Raya.

“I worry about irresponsible drivers on the road because there have been several cases of police getting injured in accidents at roadblocks, ” she added.

The mother-of-three who works in the crime prevention unit at the Sri Petaling police station, is grateful she can be on leave on the first day of Raya.

“I have served in the force for the past 16 years and this will be the first time I get to spend the first day of Raya with my children.

“In the past, I had to bring my children with me to the station during Raya as both my husband and I had to work, ” she said, adding that although she would be on leave, she could still be called in if there was shortage of manpower at the station.

Nur Amalina and her husband would usually take turns every year to go back to their respective hometown of Kota Baru (Kelantan) and Simpang Empat (Perlis).

“This year, we were supposed to return to his hometown. But since interstate travel is prohibited, we have told my mother-in-law that we cannot make it.

“We will celebrate at home. I will cook for my family, ” she said.

Lans Kpl Muhammad Azam Ibrahim and his wife Lans Kpl Samniatun Wahid, both 29, will know only a day before Raya if they are required to work.

“Our roster is not fixed and may change. I work from 8am to 5pm while my husband usually works on rotating shifts, ” said Samniatun. 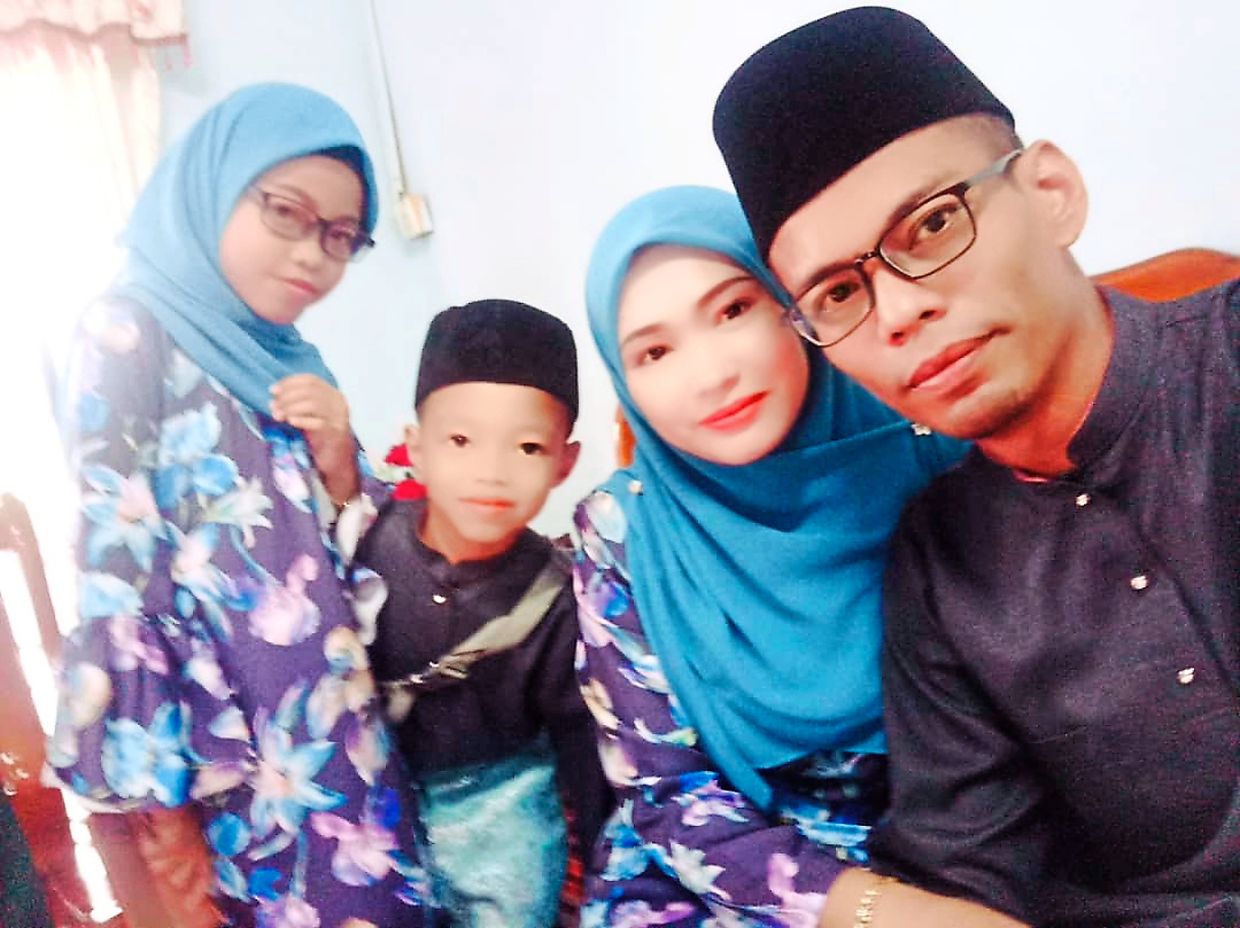 Zani (right) says he will be helping Suhaini (second from right) to cook and clean the house in preparation for Raya.

Their 10-month-old baby will be left with their neighbour at Perumahan Polis Taman Desa Tasik, Sungai Besi if they are both required to work.

Samniatun, who has served the force for five years, also worries for her husband who is regularly tasked with motorcycle patrol duties in the Sri Petaling area.

She said Azam was almost involved in an accident recently.

“He rarely gets to spend time at home because of his working hours. We often use video call to communicate, and sometimes I send him a picture of our daughter whenever we miss him.

“He also risks getting infected with Covid-19 because he meets people from all walks of life daily.

“When he comes home, he has to shower before he can hold our daughter, ” said Samniatun, adding that the family would not be

returning to Azam’s hometown of Yan in Kedah this year.

Meanwhile, Corporal Mohamed Zani Said, 35, will help his wife prepare food and tidy up their house for Raya.

“I normally help her cook rendang and fill up the biscuit jars to be placed on the dining table, ” he said.

Zani, who works at the Cheras District Police Headquarters, will be on standby on the first day of Raya in case he is needed to assemble a team for roadblock operations.

“During the MCO, I am sometimes tasked with manning roadblocks in Alam Damai, Cheras.

“We work in shifts, and each shift usually comprises three police and army personnel each, ” he said.

Unlike last year when they went back to his hometown in Bukit Mertajam, Penang, Zani said the family was expecting a more subdued celebration this year.

His wife Suhaini Yahya, 35, a full-time housewife, said she and her husband would exchange texts whenever he is stationed outside.

“I would ask him to text me when he arrives at the roadblock location.

“I also regularly text him to ask if he has broken his fast, ” she added.

Suhaini bought baju raya for their two children, aged 12 and 9, earlier this year.

“We still want our children to experience the spirit of Hari Raya although we are only celebrating it at home this year, ” she said.