A message in the bottle created by the volunteers to inform Luqman that he will be receiving his aquarium soon.

Restrictions due to the movement control order (MCO) did not stop Make-A-Wish Malaysia from granting the wishes of terminally ill children.

Even with most business premises closed, it may have seemed impossible to grant some of the wishes but Make-A-Wish Malaysia (MAWM) volunteers put on their thinking cap and devised a plan that will put a smile on the children’s faces.

“We have managed to grant three wishes since the MCO started.

“There are still quite a number which we are not able to grant because these involve wishes of wanting to go somewhere like a theme park for example, ” said Make-A-Wish Malaysia chief executive officer Irene Tan.

She added that her volunteers had tirelessly brainstormed ideas and activities for the children to do.

The team has also had virtual calls just to keep the children happy and hopeful that their wish will soon be granted.

“We based the activities on the children’s interests.

“We obtained the information after our volunteers interviewed the children when they first met and we have an extensive list of what they like including their favourite colour and food, ” said Tan.

She said the information enabled the MAWM team to keep the children entertained with various activities during the MCO.

“We also didn’t want to use too much money from our fund as things are tough now, so we really have to be very creative to come up with ideas, ” she said.

One of those who will be having her wish granted is nine-year-old Arianna who wants a gaming console complete with dancing games and features as she loves to dance.

Tan said they had been trying to get the console delivered and set up for Arianna but since most shops were closed previously, they had to delay it until now.

“The poor girl was kept waiting.

“For us at Make-A-Wish Malaysia, our criteria is that the items have to be readily installed and ready to use, so we needed someone to deliver and set it up, ” she explained.

She said that the console would be delivered to Arianna together with a cake and gifts for her siblings and parents.

“The whole idea is to have a celebration when the wish is granted, and it is not only a celebration for the child but her entire family as all of them have been going through the journey with her.

“So when we couldn’t send her the console, our volunteers were very creative in coming up with dance-related activities and even getting her to participate in online dance competitions and challenges, ” she said.

Another wish granted was to 11-year-old Luqman who has been diagnosed with T-Cell acute Lymphoblastic Leukemia.

He wanted a big aquarium in his house and this wish was almost fulfilled but then the MCO kicked in.

On March 11, volunteers visited him at his home to give him the good news via a message in a bottle which was created by them.

Plans included taking him fishing and allowing him to pick his own fish for the aquarium.

“But everything came to a halt, so instead of letting him feel down, our volunteers kept him occupied with activities related to his dream aquarium, ” said Tan.

This included arts and craft and getting Luqman to design his dream aquarium, along with him making origami fishes.

The third wish granted was to seven-year-old Sayyed whose wish was to have a ride in the Volkswagen bus, also known as the hippie van, around town.

Volunteers thought outside the box and got a miniature version for him instead, to ride at home together with his sister.

When contacted, Make-A-Wish Malaysia vice-chairman Datin Linda Ngiam said the team would continue granting wishes as much as possible even with the MCO in place.

“Hospitals keep referring children to us with their wishes and we just cannot stop because we do not know how much time these children have left.

“As a mother and parent who has been through a trauma, I understand how the parents of these children feel.

“And if we are able to make their child smile and feel good even for one hour, it will mean the world to them, ” she said.

She added that nine wishes had been granted in the first quarter of this year and although it might not seem much, it was a great milestone achieved.

Ngiam hopes others will be inspired to come forward and help put a smile on children’s faces by granting them their wishes.

Those interested to help fulfil wishes for more of these children, can visit www.makeawish.org.my/volunteers 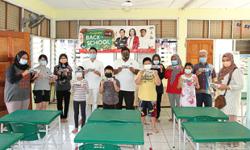