The special task force on conditional MCO on their rounds in Campbell Street.

The checks were to ensure all of the shops follow the standard operating procedure (SOP) under the conditional MCO which was extended until June 9. Visitors getting their hands sanitised before being allowed to enter a restaurant in Campbell Street.

“Those who did not follow the SOP were given advice to adhere to the conditions,” said Insp Syazwan to newsmen at Campbell Street on Monday.

“We did not issue any summonses during the checks as there were more than 95% compliance to date on the SOP,” he said. 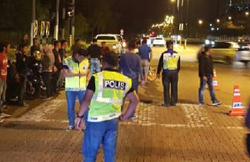