Mohd Solihan (right) talking to a passenger during a working visit to Larkin Sentral Bus Terminal in Johor Baru.

JOHOR BARU: The Larkin Sentral Bus Terminal will increase its operations in phases during the conditional movement control order (MCO).

“Express bus operations at the terminal has reduced by about 99%, over phase one to phase three of the MCO starting on March 18, with only two to three daily trips from the usual 350 trips.

“To-date, we only have three trips outside the state, namely to Terminal Bersepadu Selatan in Kuala Lumpur, Universiti Sultan Zainal Abidin (UniSZA) in Terengganu and to Melaka, ” he said after visiting the bus terminal to check on safety guidelines and the standard operating procedures implemented here.

Mohd Solihan said express and city buses were now expected to increase trips by at least 50% in view of Hari Raya Aidilfitri.

“Intercity transportation is expected to go up from 30 trips to 180 trips per day while express buses will increase to 100 trips per day, ” he said, adding that there were 20 bus companies operating in the terminal.

However, Mohd Solihan said the increased operations would only be allowed based on the Covid-19 situation in the country and directives from the Federal Government.

“As there are uncertainties currently, we will make changes as we go along. For now, buses are only allowed to carry half the number of passengers in a single trip. For example, if the bus can accommodate 40 people, it can now carry only 20 passengers, ” he said.

He emphasised that only those with clearance papers from the police could buy tickets for express buses.

“The tickets can only be bought at the counter and passengers must show proof of the necessary travel permit, ” he added.

“On May 4, Senai International Airport allowed one daily flight to Subang on Firefly and Malindo Air, while Air Asia and Malaysia Airlines will begin operations on May 20, ” he said.

The Larkin Sentral Bus Terminal will operate from 6am to 10pm daily during the conditional MCO. 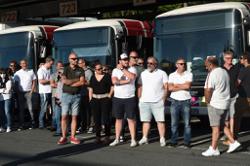 At least 21 dead after bus falls into reservoir