Having it their own way

A resident feeding the pigeons at the flats.

SOME senior citizens at Rifle Range flats in Penang are finding it hard to stay at home with some spotted hanging out among friends there.

Many could be seen in groups, without masks, spending time sitting and chatting at the bus stop near the flats.

“We cannot sit at home, as the weather is too hot and this has been our lifestyle which we find difficult to change, ” said Ng Peng Chong, 55, a former hotel worker.

“I moved into a unit in Block D with my wife five years ago and my routine is to come down twice after breakfast and after lunch to meet my friends.

“Yes, I understand that I must stay indoors, but it is difficult getting used to even though it is for my own good, ” he said.

Lim Yam Sik, 78, who moved into Block A in 1972, said she often felt restless confined in her flat unit.

“It is unbearable to be inside the small flat unit during the hot season.

“I am old and while I know that it is not advisable to go outdoors during the MCO, but we have no where else to go, ” said the lady, who lives with her sister.

Ng Woke Wah, 63, who has a foundry, said the Rifle Range flats is the oldest on the island and “many of us have been friends for years and this is how we spend our time together”.

Kebun Bunga assemblyman Jason Ong said it is difficult to get the senior citizens in Rifle Range flats to comply with the MCO.

“The police are having a hard time handling the old folk, and we must commend them for being extremely patient by giving the residents repeated advice.

“I have personally talked to the senior citizens to stay indoors for their own safety, but they insist they can’t be cooped up in their units and have to be out to meet friends.

“As the assemblyman, I can merely advise them.

“It is not easy to manage 3,600 units and we have non-governmental organisations delivering food to most of them because they do not have any earnings, ” he said.

The Rifle Range flats are the oldest flats on the island, with a total of nine blocks built in 1969 and has about 15,000 residents. A resident feeding the pigeons at the flats.

(Left pic) Senior citizens moving freely at the flats during the MCO. 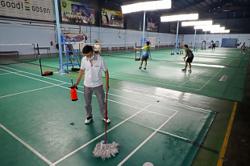