Sustenance for the poor

VOLUNTEERS at Kawan Centre in Penang are helping to feed the poor by supplying food vouchers and grocery boxes.

Since the start of the movement control order (MCO) period, the volunteers have been setting up a station outside their centre every Wednesday to give out food vouchers which can be redeeemed from various restaurants.

Kawan Centre coordinator Ed De Visser said the vouchers given ensure that the recipients get a week’s worth of food from the restaurants.

“We approached seven restaurants which are willing to provide food to the needy and we pay them RM4 for each meal a recipient gets.

“Initially, we wanted to provide food at our centre but that would bring in a lot of people and cause crowding which is something we do not want.

“So we thought of appealing to restaurants and paying them so the recipients can then visit the restaurants to get their lunch and dinner every day.

“This way, there will be no crowding, ” he said while distributing the food vouchers at the centre in Lebuh Klang.

Visser said that since the start of the MCO, they have given out some 530 voucher booklets, costing over RM14,000.

The centre, he added, has also started giving out grocery boxes on Wednesday.

“In the past few weeks when we gave out food vouchers, some people with families asked for more.

“There were foreigners coming here to ask for the vouchers as well.

“These foreigners earn daily wages and now with the MCO, they need aid too, ” he said. 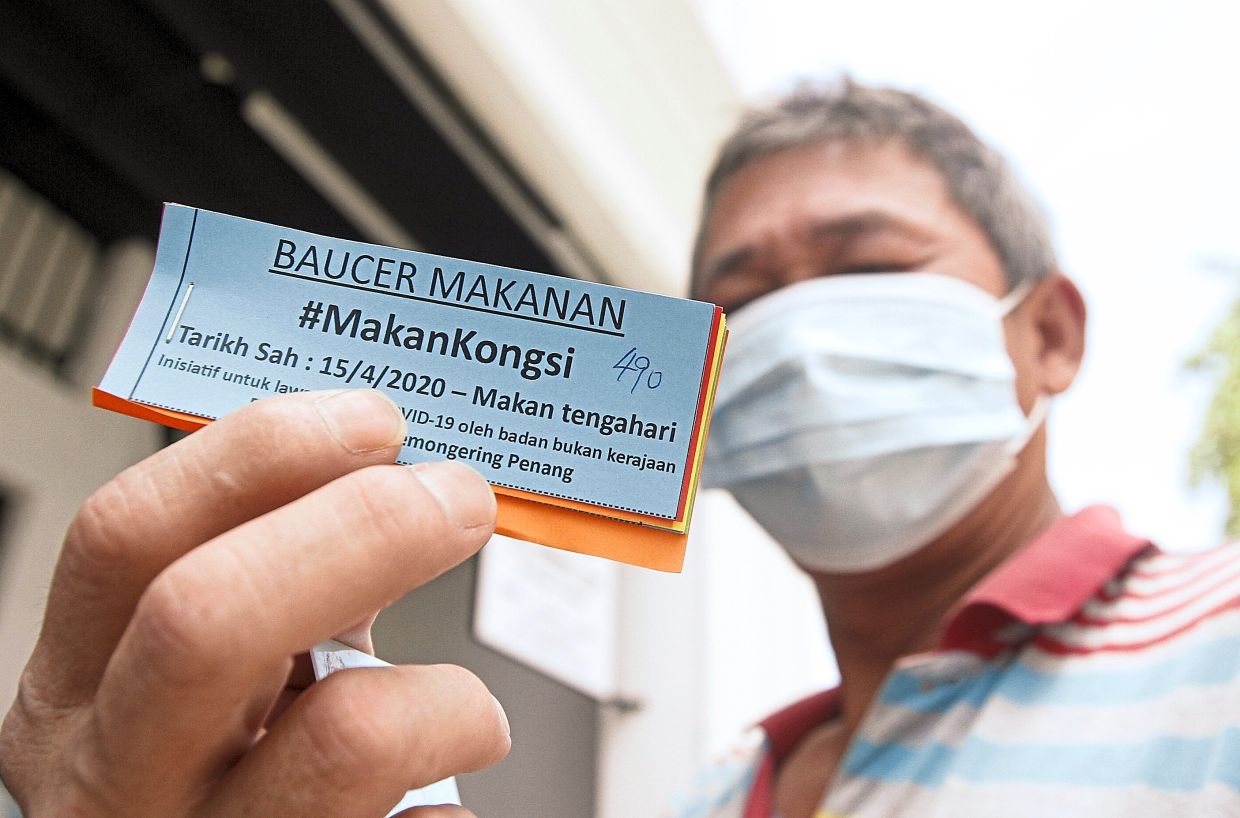 Haslam Alif Ng showing the food voucher booklet he received at the centre.

Visser, however, said the centre’s funds and supplies were now running low.

“We have a shop in Lebuh Chulia which sells second-hand items. That was how we got the money to sustain this centre.

“Now that the shop has closed down, it is harder for us to pay the centre’s bills and reimburse our volunteers and workers at the shop.

“This amounts to over RM12,000 monthly and right now, we are relying solely on donations from the public.

“We hope that the public can help us continue our efforts by donating grocery items or funds, ” he added.

Recipient Haslam Alif Ng Lim Abdullah, 53, who was spotted collecting his voucher booklet, said he was very grateful for the aid provided.

“I earn a living by collecting recyclables.

“My wife and I live in a rented flat off Taman Free School. She is unable to work because of ill health.

“Before the MCO, I earned about RM500 every month but since the MCO, I have not been earning as I cannot move around to collect recyclables.

“So I come weekly to the centre to collect food voucher.

“Although each voucher provides only one meal, my wife and I can share the meal and at least fill our stomachs twice a day, ” he said.

Kawan Centre has been providing free meals, bathroom facilities and a resting area for the poor and homeless since June 2007.