Volunteers helping to clean Kampung Chempaka houses after the flood.

SEVERAL areas in Petaling Jaya were hit by flash floods after a downpour Thursday evening and among the worst affected was Kampung Chempaka with 75 houses inundated.

Bandar Utama assemblyman Jamaliah Jamaluddin gathered over 20 volunteers to help residents clean up as well as distribute face masks and foodstuff such as rice, noodles, cooking oil and biscuits.

“Welfare Department (JKM) officers also joined in during the food distribution to assess the needs of the affected residents.

“JKM will contribute pillows, mattresses and blankets soon, ” she said, adding that the affected houses were disinfected after being cleaned.

Jamaliah said the flash floods happened as Sungai Kayu Ara, which is being upgraded, burst its bank.

The Selangor Drainage and Irrigation Department (DID) had collected funds for the Sungai Kayu Ara Riverbank Upgrading Project last year, she said.

“However, the project, valued at RM20mil, is still in its initial stages and is expected to take two years to complete, ” she added. Part of Lorong 51A/227A was also flooded after heavy rain.

City councillor in charge of the zone, A. Sugumaran, said Petaling Jaya City Council’s (MBPJ) Health Department was cleaning up the stalls at Medan Selera Jalan 223.

“Upon inspection, the officers found the drains filled with plastic waste and rubbish that blocked water flow, ” he said after a site visit yesterday.

“The Jalan 223 area is prone to flash floods but it usually subsides.

“Thursday’s downpour was unusually heavy, so the sudden deluge of water resulted in an overflow of Sungai Penchala and drains in the Section 51A area, ” he said.

Sugumaran added that it was a little more challenging to get things done during the movement control order (MCO) period, but MBPJ was doing all it could. All 75 houses affected in Kampung Chempaka were also disinfected.

“Some private companies that had their premises flooded conducted their own cleaning-up works, ” he added.

Resident Sheikh Moqhtar S. suggested that Sungai Penchala be cleaned and deepened, adding that the flash flood was a wake-up call for the authorities.

“In February there was a flash flood at Jalan 222 near the Petronas station. One car stalled.

“Over the past three years the current at Sungai Penchala has been very strong. Water in the drains at Jalan 14/32 is filled to the brim each time it rains, ” he said, adding that they lived in fear of more roads being affected.

“This could have also been another reason behind Thursday’s flooding, ” said Charlie. 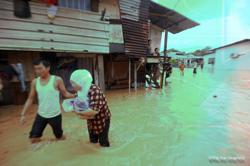