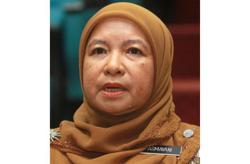 Dewan Sri Pinang will be disinfected and those attending the assembly sitting will practise social distancing, says Chow.

THE Penang state legislative assembly will be held for a half-day session on April 17 amid the Covid-19 pandemic, said Chief Minister Chow Kon Yeow.

He said State Assembly Speaker Datuk Law Choo Kiang and state exco members had agreed to the date and that the session should be shortened in view of the ongoing pandemic situation.

Chow said he would visit the Yang di-Pertua Negri Tun Abdul Rahman Abbas for him to call the state assembly to be in session on the agreed date.

He said the ceremonial inspection of guard of honour would not be held, adding that the sitting’s opening would begin with Yang di-Pertua Negri Tun Abdul Rahman Abbas delivering his address.

“All oral questions by assemblymen will be replied in written form and the sitting will be broadcast ‘live’, ” he said in a press conference carried live via his personal Facebook page yesterday.

The state assembly sitting was last held in November last year, with the next one slated for April 17 this year.

The legislative assembly session must be held within six months of the last sitting as per the constitutional requirement.

Chow said Dewan Sri Pinang, where the sitting would be held, would be disinfected and those present would practise social distancing and have their body temperatures recorded.

He said any assemblyman who is feeling unwell would be exempted from attending the sitting.

“The state legislative office will arrange for medical personnel to attend to the attendees’ health concerns.

“I hope the upcoming session will proceed smoothly despite the restrictions faced due to the pandemic, ” he said.