Stopover in KL on the ‘itinerary’

Malaysians landing at KLIA from abroad are seen heading to the quarantine centre. — Filepic

PENANGITES who are flying in from overseas will be quarantined in Kuala Lumpur before they are allowed to return to the state.

Chief Minister Chow Kon Yeow said the National Security Council had announced that all Malaysians returning from overseas would be in quarantine for 14 days from now to combat the transmission of Covid-19.

“According to Malaysia Airports Holdings Berhad, no international flights will be landing in Penang International Airport currently due to flight cancellations until further notice.

“Please be patient and adhere to the mandatory isolation for the safety of all.

“Your sacrifice means a lot to everyone in curbing the spread of Covid-19,” he said during his live daily public update via Facebook yesterday.

After the movement control order (MCO) was issued, Chow stopped holding press conferences and only spoke publicly via Facebook.

Chow added that he was told by Penang police chief Comm Datuk Sahabudin Abd Manan that Penang has achieved a 97.8% compliance rate during the MCO. He also announced that no Penang frontliners had tested positive for Covid-19 as of press time.

Chow also thanked Penangites for their personal messages and prayers to him.

“I am doing well except that my hair has grown a bit longer and untidy since all the barber shops are closed,” he joked.

The state has also approved 20,000 food packages to be distributed to the poor soon.

“The target groups are recipients of welfare aid and AES assistance along with residents of People’s Housing Projects and low-cost homes.

“The groups also include any other individuals or families who have been identified as being eligible for such aid by state assembly members.

“The centralised distribution system of these food aid packages will be monitored from time to time for further improvement,” said Chow in his Covid-19 live Facebook message on Saturday.

Chow also said the state government has distributed face masks, gloves and infrared thermometers to frontliners and all offices of state assembly members.

“Up until now each assembly member has been given 2,000 face masks to be distributed to their respective constituencies and I will ensure more masks are made available once supplies arrive.

“I must also thank the Village Community Management Councils (MPKK) and Women and Family Development Committee (JPWK) plus many others who have been working non-stop to provide assistance to the people of Penang.

“Although their service centres were closed due to the MCO, the elected representatives were still providing service.

“I observed that many of them have taken proactive measures to make sure that the people obey instructions to safeguard public health such as the practice of social distancing and the use of hand sanitisers and others,” he said. 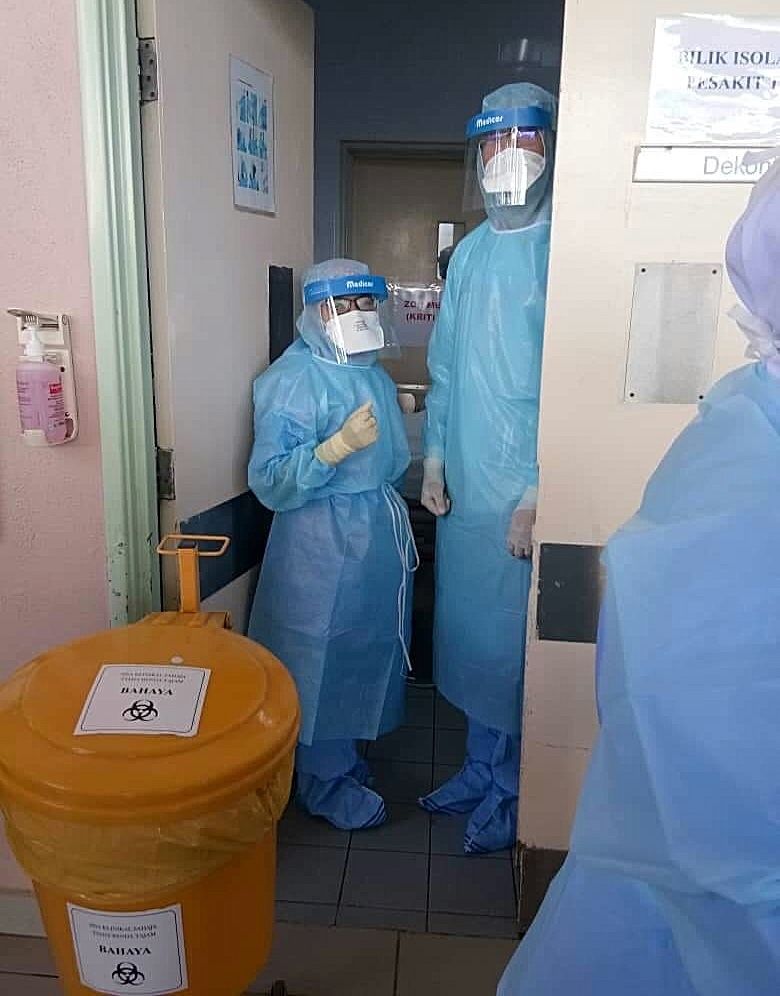 Medical personnel in full protective gear at Kepala Batas Hospital. As of press time, no frontliner in Penang has been infected with the virus. — Filepic

Chow added that state assemblymen have also been distributing foodstuff to the needy with the assistance of the MPKK, JPWK and non-governmental organisations.

“I am also aware that many business owners and entrepreneurs are waiting for further announcements on the Penang Business Continuity Zero Interest Loan scheme,” he said.

Meanwhile, Penang assemblymen, including opposition members, have agreed to contribute 30% of their salary to Tabung Covid-19.

The initiative is an additional effort to the announcement made by Chow on March 27 that the state exco members had agreed to contribute a month’s salary towards the fund.

In a joint statement, the assemblymen also thanked Chow for the RM30,000 allocation to each assemblyman under the state’s Covid-19 economic stimulus package.

“We are also thankful for the distribution of face masks and other equipment for the community in our constituencies.

“It is hoped this 30% contribution will help the state government to upgrade its initiatives to stop the spread of the Covid-19 virus in Penang,” they said.