Police personnel man road blocks on the main road to Kampung Sungai Lui Batu 21. The village is among several in Sungai Lui under the enhanced MCO. - Bernama

THE announcement of an enhanced movement control order (MCO) covering seven villages from Batu 21 to Batu 24 in Sungai Lui in Hulu Langat, Selangor, may have come as a shock to residents but they are now adjusting well.

Kampung Batu 21,22,23 and 24 village head Mohd Razak Jalaludin, 52, said everything was under control in his area where 2,000 residents live.

“The Welfare Department (JKM) is sending food. The police are here to keep things in order. Air Selangor has also sent its water tanks into the village, ” he told StarMetro when asked for feedback on the enhanced MCO.

Residents are barred from venturing outdoors at all hours for two weeks from March 30 until April 13, Defence Minister Ismail Sabri Yaakob said when announcing the directive last week.

The new restrictions were put into place after 71 tahfiz residents from the Maahad Tahfiz An-Nabawiyyah school at Batu 23 Sungai Lui tested positive for Covid-19.

Residents in Kampung Batu, who are into the first few days of a two-week order, are forbidden to leave their homes, even to buy groceries but will instead have to rely on the government to provide daily necessities.

The authorities have already started sending food packages, comprising dry and wet groceries such as canned sardines, fresh meat, fish and vegetables, cooking oil, rice, flour as well as sugar, to each household.

“A food pack for each family is worth about RM200 and is meant to last for two days. The families here received their first food pack yesterday evening, ” said Mohd Razak.

According to him, Dewan Orang Ramai Batu 21 has been designated as the distribution centre for food supplies.

Personnel from JKM, the police, Lembaga Zakat Selangor, Fire and Rescue Department, and Health Ministry are on-site to offer support to anyone who may require medical assistance or any other form of aid at this time.

“Even the mosque nazir has taken an active part. Those in the village who have been mobilised to help have all been screened, ” he added.

In terms of compliance, Mohd Razak said villagers have so far been cooperative, with only two cases of people being stopped by police for leaving their homes.

“They were not wilfully disobeying the order but were unaware of the latest situation as they were senior citizens residing a distance away when the announcement was made, ” he said.

He added that the tahfiz school was about five kilometres from the village and there were no recorded cases of Kampung Batu 21 residents testing positive for the virus.

Mohd Razak said villagers here were already mentally and emotionally prepared as before the enhanced MCO was announced, many were already following the order to “stay at home”.

“After all, staying home is quite the norm for kampung folk, ” said Mohd Razak.

“It is not a usual thing for the people here to be told they cannot leave their homes but they are following orders. The village chiefs have been very active in ensuring compliance and maintaining calm, ” said Shukri.

Pointing out that JKM personnel had been stationed at all affected areas to ensure basic needs of residents were being met, Shukri said the office received one complaint of a burst water pipe so far. Air Selangor has responded to the situation.

In addition to food supplies, diapers and milk powder were distributed a few days ago to 15 houses in the affected areas.

Daily meals for around 100 frontliners working in the affected area in Sungai Lui are also being trucked in regularly.

Shukri said they were also considering asking for cash donations for affected residents as a majority of them were daily wage earners whose livelihoods had been severely affected by the enhanced MCO.

Otherwise, he said affected residents should be relatively comfortable as the village has electricity, water supply and WiFi service. 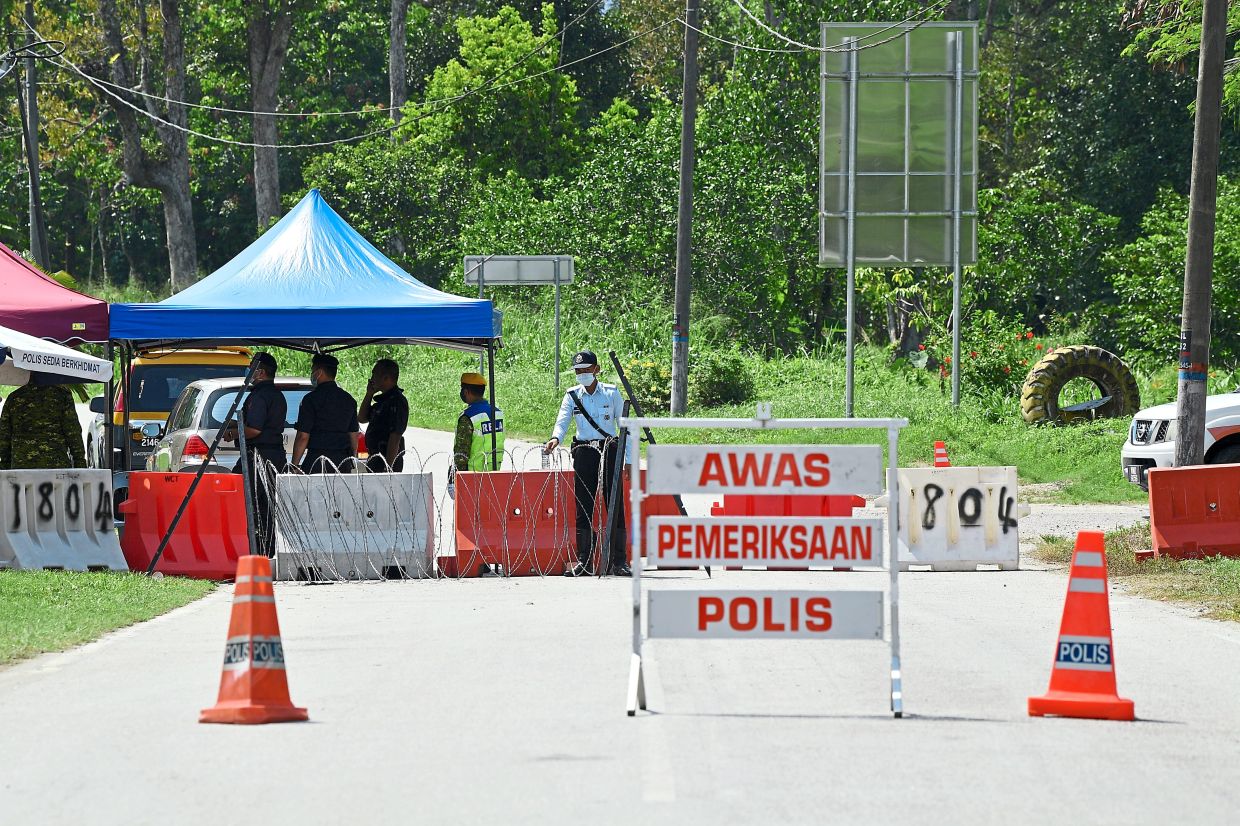 Police personnel man road blocks on the main road to Kampung Sungai Lui Batu 21. The village is among several in Sungai Lui under the enhanced MCO. - Bernama

Mohd Razak (left) with some volunteers and food packs given to villagers.