Catching up on Qing Ming

AN ACCESS road and link bridge at Taman Sungai Jelok heading towards the Kajang Hokkien Cemetery is now open in time for the Qing Ming festival.

The RM1.3mil state government project was initiated after the original route to the cemetery via Lot 8768 was taken over for the construction of a new women and children’s hospital in Kajang.

The existing road could also not cater to the high number of vehicles, resulting in the authorities building the alternative route.

Kajang assemblyman Hee Loy Sian said construction for the new road started last July and it was expected to be completed by the end of March.

“Thankfully, work finished early and we managed to open it in time for Qing Ming.

“This year, we are expecting 3,000 vehicles for the festival.

“To manage traffic flow during the period, the two-way road will be made one-way and people will need to use another route to exit.”

“This will be in effect two weeks before and after the festival, ” he added.

Rosli said he was thankful that despite the Covid-19 situation, the official launch of the new access road managed to proceed.

Tan thanked everyone involved in expediting the construction which would especially benefit the Hokkien community during Qing Ming. — By SHALENNY CARINO 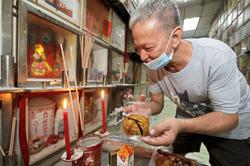 Catching up on Qing Ming