THE smell of sea and salt emanated from a bubbling wok as fisherman Mohd Noh Ikanan lifted out a plump blood cockle, pried its shell apart and popped the meat into his mouth.

Caught just an hour before, the freshness was evident as he savoured the mollusc that was an important ingredient in a good bowl of curry laksa.

“The best blood cockles are from Sabak Bernam. They are known to have a buttery texture and are best enjoyed half-boiled with a spicy Thai-style chili sauce as dip, ” he declared.

Mohd Noh shares a 50ha lot with 20 other cockle farmers some two nautical miles from the Bagan Nahkoda Omar Jetty in Sabak Bernam.

It is part of the Selangor Fisheries Department’s (SFD) Cockle Garden project that started in 2008.

The “garden” covers the districts of Klang, Kuala Selangor and Sabak Bernam, inspired by the vast muddy beaches that are a prevalent geographical feature in this state.

Called the intertidal zone, fishing communities have known these muddy beach flats to be rich picking grounds for a variety of shellfish including blood cockles.

In an effort to increase cockle production and improve the economic status of traditional fishermen, SFD mapped out some 200 lots of cockle farms covering close to 10,000ha and farmers were granted temporary occupation licences.

Another farmer, Muhd Fadli Rusni, said the farmers enjoyed good yield from 2008 to 2016.

“On average, each of us could make more than RM4,000, ” said Muhd Fadli, who is Mohd Noh’s brother-in-law as well as head of MyKomuniti Perikanan (MyKP) for Bagan Nakhoda Omar.

Cockle farmers found the survival rate was no more than 25% and they were told the cause was water pollution.

Discouraged by the bleak prospect, many opted out of these collective farms. They chose to earn a living from construction work besides catching crabs and prawns. But not all the cockle farmers gave up.

Zulkifly Ibrahim, who shares the same cockle lot with Muhd Noh, is among those who persevered.

The father of three said he took to hovering over his spats, shifting them to cooler spots when he felt the water had become too hot.

Those that were buried too deep within the seabed were either shifted or had excess mud removed on the spot.

He said movement, instead of remaining in a stationary state, was considered good exercise and encouraged the cockles’ growth.

To address overharvesting, a discussion among lot members resulted in the decision to set the daily limit for each farmer at no more than 135kg.

In addition, the gaps of cockle scoops were made to comply to a Fisheries Department directive to ensure only matured cockles (measuring 29mm and above) would be landed.

Though Zulkifly said he welcomed offers to restart cockle farming at a new spot, he remained optimistic that future yields might see improvement.

In his opinion, it would be difficult to find similar ideal locations like Bagan Nakhoda Omar suitable for cockle farming in other parts of Selangor due to differences in shoreline and seabed conditions.

“The industry may have a better chance of revival if authorities, researchers and the fishing communities are able to address pollution issues and introduce better farming methods that are also environmentally sustainable, ” said Muhd Fadli, who spoke on behalf of 20 cockle farmers in Bagan Nakhoda Omar.

In 2016, volunteers and Rela members detained two foreigners who were attempting to escape with cockle spats from one of the farm lots.

Volunteers confessed that they sometimes feared for their lives during their watch, as smugglers were becoming bolder.

Selangor Fisheries Department director Abdul Rahman Abdul Wahab acknowledged that the record showed a significant decline of cockle harvest in the state within the past 10 years. In 2008, production was at 14,651 metric tonnes but last year, preliminary data showed that yields had dropped to a mere 331 tonnes.

Abdul Rahman said this decline could not be attributed to a single cause as cockles were susceptible to several threats.

“One is pollution from surface runoff, chemical fertilisers, industrial waste and farm effluents. The effluents from plantations or other industrial entities near river mouths discharged into the river and subtidal zones reach roughly one nautical mile from shore, which is the area where cockles spawn and feed.

“Another threat is sand mining as sedimentation can cover the muddy seabeds and suffocate the brood stock.”

In combating these problems, he said the department was in close cooperation and constant discussion with related authorities, adding that they had the support of Selangor Public Infrastructure and Facility, Agricultural Modernisation and Agro-based Industry executive councillor Izham Hashim.

Though some cockle spats may survive and develop to maturity, they may be exposed to various contaminations in the surrounding environment because cockles are filter feeders.

To ensure existing harvests in Selangor are safe for consumption, the department conducts scheduled monitoring at least twice a year at selected sampling points in Sungai Besar, Jeram and Klang under the National Shellfish Sanitation Programme (NSSP). There are three points at each location.

If tested samples are found to have exceeded permitted levels of contaminants, Fisheries Department is responsible for informing the state Health Department and the marine culture operator to withdraw the shellfish from sale.

Operators who do not comply will have action taken against them as provided for under Fisheries Regulations (Marine Culture System) 1990 of Fisheries Act 1985.

Temptation in the form of lucrative pay-offs for smuggling of the brood stock is another contributor to dwindling cockle population. From January to December 2019, Selangor Fisheries seized 170 sacks of cockle spats from smugglers in Bagan Nakhoda Omar.

Enforcement officers were informed that the spats were sourced from Kampung Banting and brought here by sea to be smuggled out to a neighbouring country.

This initiative will identify areas of natural spatfall and assess if the areas are ideal for blood cockle cultivation.

Abdul Rahman said scientific study would also be conducted to assist the department in developing management plan for sustainable cockle farming in Selangor.

“We are hopeful these initiatives will play a part in conserving natural resources and protect them against unsustainable and illegal harvest.

“To ensure sustainability, activities will be monitored and controlled through constant surveillance, ” he said.

In the wake of the impact of marine debris especially plastic on fisheries resources, Fisheries Department is leading a nationwide programme to raise public awareness of the dangers from rubbish dumped into the sea.

It is working with key strategic partners such as the fishing communities (myKP), primary school pupils, Forestry Department and Fisheries Development Authority.

Within two hours, they collected close to 180kg of domestic trash.

“Fishermen need to be made aware that even the throwing of empty cockle shells back into the sea can affect habitats as piled up old shells will eventually turn soft muddy seabed into hard bottom substrate, which is no longer a conducive ecosystem for cockles to grow.

“We are confident that awareness will help improve the chances of cockle growth, ” said Abdul Rahman. 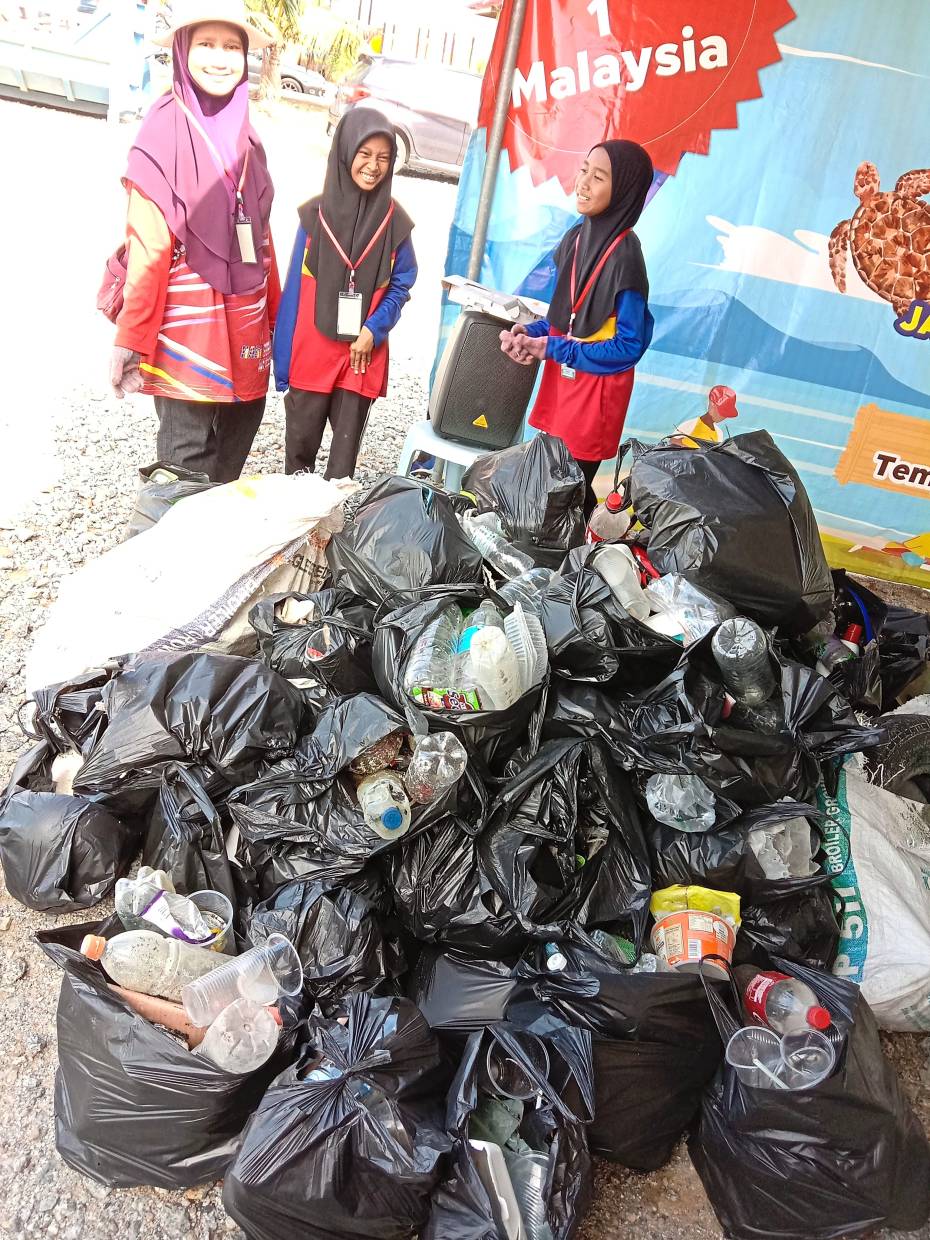 Cockle spats at various stages of growth. Smuggling is one of the causes for dwindling cockle population in Selangor.

Abdul Rahman says the throwing of empty cockle shells back into the sea can affect habitats as they will transform the soft muddy seabed.

Muhd Fadli and his wife, Siti Rohaya Ikanan, at their seafood stall. The blood cockle price has ballooned from RM1.94 per kilogramme in 2008 to RM8 at present.

The gaps on cockle scoops (foreground) are made to comply with Fisheries Department directive to ensure harvest of only matured cockles.

Villager Asiah Ismail combing the muddy beach flats at Bagan Nakhoda Omar to look for ‘barai’. The mud flats are rich picking grounds for a variety of shellfish, including blood cockles.

Close to 180kg of domestic trash were collected in a recent beach clean-up organised by Selangor Fisheries in Bagan Nakhoda Omar.