PETALING JAYA: Some 40 flat occupants had to vacate a three-storey building in Datuk Keramat, Kuala Lumpur after works to upgrade the drainage by Kuala Lumpur City Hall (DBKL) caused the structure to tilt and cracks to form.

The RM1.4mil project, which began on Dec 19 last year, was started by DBKL following frequent complaints among residents of water flooding in the area especially during rainy season.

Seven families comprising 21 people had since taken temporary shelter at a community hall near the Keramat market while the rest chose to stay with relatives.

Mayor Datuk Nor Hisham Ahmad Dahlan, who visited the site, said the soil structure in the area weakened due to water accumulation at the project site.

“Work would be undertaken to stabilise the surrounding soil structure before the rest of the project would be continued.

"We estimate this to take between two and four weeks to complete," he said on Sunday (March 8).

Nor Hisham urged the building owner to submit the building plan to DBKL in order to obtain the Certificate of Fitness (CF).

“This is to ascertain that the building is safe to occupy and to ensure that it can be covered by insurance should any untoward incident happens,” he said, adding that DBKL did not issue a development order for the building.

The building, which was built in 1995, has 32 rooms and is near the project site.

The mayor said a glass monitoring system would be installed at the building to track its structural integrity.

“Residents are not allowed to return to the building until work to stabilise the soil is completed for their safety,” he said, adding that DBKL would review if residents would be entitled to receive compensation.

The work to upgrade the drainage was initially scheduled to complete by July this year, but had since been pushed to a later date following the stabilising work. 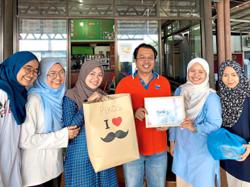