Amirudin (right) says the Selangor government will ensure everything is taken into consideration before the degazettement takes place.

“The state government has plans to gazette a bigger area as a forest reserve to replace the area that will be degazetted, ” said Amirudin at a press conference.

He said the state had a list of suitable areas located in Kuala Selangor, Sabak Bernam as well as in Hulu Selangor to choose from and that the Selangor government would add almost 162ha to the new area.

Amirudin also responded to criticism levelled against the state government regarding this, saying that such criticism is baseless and erroneous.

He also said that all the fuss raised on social media is premature and that the state government will ensure everything is taken into consideration before the degazettement takes place.

“Some of the allegations are premature, while some are baseless and some are untrue, ” said Amirudin.

The Water, Land and Natural Resources Minister had said green lungs should not be destroyed for development and added that he was concerned about the Orang Asli villages and natural habitat there.

He had said that the structure of the peat soil makes the KLNFR a significant underground water catchment area and added that it is a roaming area for Orang Asli from the Temuan tribe.

Its secretary Abdul Razak Ismail said he was shocked by the proposed degazettement, which he described as an “irresponsible move” by the state Forestry Department.

“It is indicative of the state government’s lack of care towards protecting the environment, forests and its habitat, ” said Abdul Razak.

Responding to this, Amirudin said that the state is only in the second stage of the de-gazettement process, and added that a public hearing is ongoing.

He then said that the public hearing process would end on March 5.

“We are currently receiving, evaluating and considering the protests and issues raised in regards to the degazettement in totality, ” said Amirudin, adding that everything would be considered before the final decision is made.

“There are four Orang Asli villages with about 1,000 people and we will not be encroaching into their areas, ” he added.

Amirudin also said that approximately 40% of the proposed area consisted of forests that have been damaged by fire, adding that these areas lack the elements that a jungle should have.

“In some areas, there are no trees or an ecosystem synonymous with forests, ” he added.

He then said that the degazettement will change the facet of the damaged forest area to be in tandem with the surrounding location which has developments by Selangor Business Capital, PKNS (Selangor State Development Corporation) and Gamuda Berhad.

Amirudin then said that the replacement peat soil swamp forests are thriving with good ecosystem that has never been encroached or damaged.

He said one of the new replacement areas is located in Sungai Panjang, Kuala Selangor and would connect the KLNFR with the Raja Muda Musa Forrest making the state the owner of the biggest peat soil forest in the peninsula.

Steel wall to be built at Bukit Antarabangsa landslide area 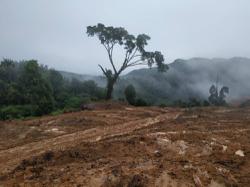