Yew (fifth from left) receiving a 10-year free pizza package from Domino’s for winning a gold medal in the SEA Games in the Philippines.

THERE are plenty of misconceptions surrounding e-sports among parents and this makes them reluctant to see their children become involved in the industry.

However, recent years have seen an upward trend in e-sports especially through the organisation of competitions locally, regionally and internationally.

Many video game developers have also joined in the trend by organising their own tournaments to promote their games.

As such, a panel discussion involving key figures in the local e-sports community was held at Battle Arena Malaysia, Jaya Shopping Centre, Petaling Jaya, with the aim of discussing the challenges as well as long-term future of the industry.

Asia Pacific University eSports Malaysia Academy manager Thanesh Ghanasan said many parents were opposed to their children joining e-sports because they lack understanding of what the sport entails.

“The image most people have in their minds when talking about e-sports is a group of gamers hunched in front of their computers with their eyes glued to the screen.

“But e-sports is so much more than that because it involves teamwork and extensive planning especially during competitive matches, ” he said.

“Most of our parents were raised in a different era and have a traditional concept of suitable careers.

“This is why most parents encourage their children to aim for conventional professions like lawyers, doctors and engineers.

“Many are not willing to entertain the idea of an alternative career path in e-sports, ” he said.

Farouq urged children to be more understanding of their parents’ views and to do their part to show the positive aspects of e-sports.

Thanesh said some parents he spoke to cited video game addiction as one of the reasons they were reluctant to let their children participate in e-sports.

“What parents can do is set a schedule for studying and training so that their children will have clear boundaries, ” he said.

On a separate matter, Farouq brought up the issue of low payment by tournament organisers to casters.

A caster is a commentator who narrates the game to the audience and this requires a fair amount of understanding of the game.

“Many casters have to compete among themselves to get hired by tournament organisers.

“As a result, they tend to lower their booking fee out of fear that they will not get hired while some agree to a lower payment for exposure, ” he said, adding that this has affected the pay structure for other talents in the community.

Farouq also lauded the Youth and Sports Ministry for showing interest in and supporting the development of e-sports in Malaysia.

Its minister, Syed Saddiq Syed Abdul Rahman, said that the government, via the Esports Strategic Development Plan, would allocate RM20mil towards the development of e-sports.

At the event, Domino’s held a ceremony to appreciate e-sports athletes who had won medals at the 30th SEA Games in the Philippines.

Domino’s Pizza Malaysia operations deputy president Shamsul Amree said they wanted to reward the athletes for their sportsmanship and outstanding performance.“We appreciate and understand the hard work, determination and tenacity that these players put into the tournament.

“These values are in line with Domino’s aim of delivering quality products and enhanced service to all, ” he said.

Recalling his training routine, Yew, who holds a PhD in electronics engineering, said he began training two months prior to the SEA Games.

“During the first half of the training, my coach and I tried out different strategies to find out which one was the best.

“During the last two weeks before the tournament, we ramped up our training after finalising our strategy, ” he said, adding that he would train for up to 12 hours a day.

Asked if he had any advice for aspiring e-sports athletes, he said: “Focus on your studies first. If you have time, then you can play video games.” 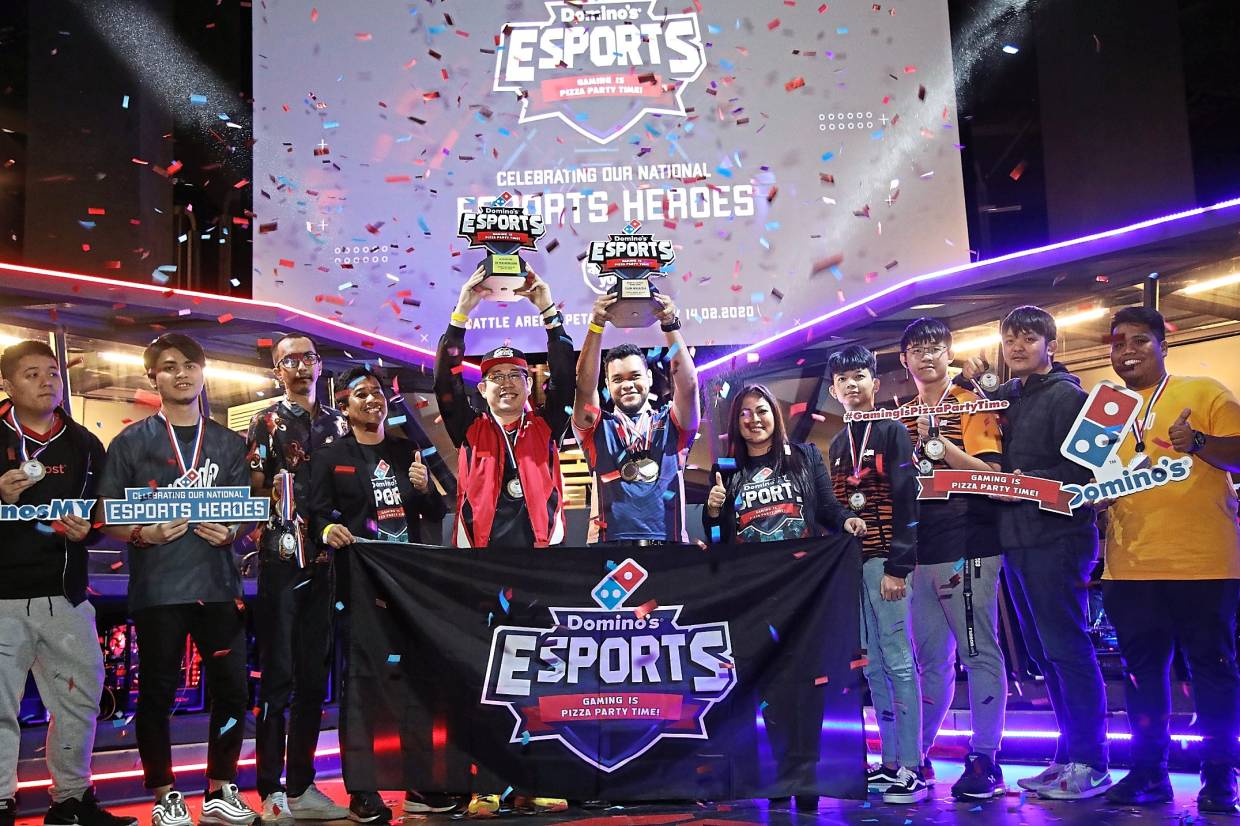 Yew (fifth from left) receiving a 10-year free pizza package from Domino’s for winning a gold medal in the SEA Games in the Philippines.

(From second left) Thanesh, Lim, Linda, Cheong and Farouq in a panel discussion on the challenges and future of e-sports at Jaya Shopping Centre, Petaling Jaya.