Crackdown on smoking at shisha outlets Shisha cafe operators are concerned because food sales alone will not be able to sustain their business. — Photos: YAP CHEE HONG/The Star

THE Federal Territory Health Department (JKWP) is planning to launch a major crackdown on shisha cafes in Kuala Lumpur in relation to the smoking ban at eateries.

Department director Dr Param Jeeth Singh told StarMetro that the crackdown was supposed to take place last month, but somehow the operators got wind of the exercise and the coronavirus outbreak required immediate attention.

“Apart from the shisha cafes, we will also inspect restaurants to see if they are observing the smoking ban, ’’ he said.

Param Jeet said the blitz which would take place in the Bukit Bintang Golden Triangle, which is the city’s shisha hub with more than 50 outlets.

“If the shisha cafes are merely offering hookah, then it’s not an issue. However, if food and drinks are being served, then we have a problem, ’’ he said.

Asked whether there were many shisha cafes serving food on the side, Param said, “most likely most of them are also selling food.”In light of the smoking ban in eateries, customers are not allowed to smoke within 3m from the outlet.

That would mean that the majority of shisha cafes could be out of business.

“Unlike other eateries which are backed by a body that informs operators on government policies, shisha cafes are pretty much on their own.

“It is not practical to approach each outlet individually to inform them on the new rules. The onus is on them to keep abreast of any new policies, ’’ he added.

“In the operation, samples will be collected and checked for nicotine. Products found to be carrying the substance and if there are ashtrays within the premises, compounds will be issued, ’’ she said, adding that from the looks of it, the operation would most likely wipe out the entire shisha business in the city.

The Health Ministry started enforcing the smoking ban on all eateries, including open-air dining areas, as per Regulation 11(1) Control of Tobacco Product Regulations 2004 (Amendment) Regulations 2018 since Jan 1 this year.

The regulations prohibit smoking within a 3m radius from any table or chair at an eating place.

Besides tobacco products, vape and shisha with nicotine are included in the ban.

Enforcement was also carried out on all food premises owners under Regulation 12(1) of the Control of Tobacco Product Regulations 2004 to ensure that their eateries are free from all forms of smoking by displaying the no-smoking sign clearly and not providing ashtrays or service selling shisha or other types of smoking equipment.

Those caught smoking in prohibited areas can be fined up to RM10,000 or face two years’ jail, while eateries found to have allowed customers to light up will be slapped with a maximum fine of RM2,500.

Eatery operators are required to display prominently “No Smoking” signs measuring at least 40cm x 50cm at their premises.

What about shisha cafes?

A recent check at some 10 eateries selling shisha in the Jalan Bukit Bintang and Changkat Bukit Bintang areas showed that all continued to sell shisha within their premises; with some making provisions to adhere to the ban.

Ghadeer Issa, who manages Madfoon Palace in Bukit Bintang, said he had resorted to turning his al fresco dining area into a smoking zone.

The restaurant, which serves fusion Arabic cuisine, is mostly patronised by Middle Eastern tourists and the Arab community here.

“My customers can only eat inside the air-conditioned part of the restaurant and have to smoke shisha outside, which is the required 3m distance.

“It is a bit of a hassle as customers have to keep going in and out and can’t spend the time with their friends and family.

“Shisha is not like smoking cigarettes, where you take a few puffs and you’re done.

“It is a social way to interact with others and is meant to be savoured, ” he said, adding that there was some confusion as to whether the same ruling applied to those selling shisha without nicotine.

“We only sell herbal and fruit-flavoured shisha here, and these do not have nicotine.

“Many others also sell shisha that has no nicotine or very little of it, but there has been no clarification if the no-smoking ruling is applicable to us, ” he lamented.

Ghadeer said while there had not been a significant drop in customers, he was concerned over the lack of clear guidelines.

Over at Halab Castle Restaurant in Changkat Bukit Bintang, manager Joy Sivaramakrishan said the 60% of the restaurant’s income was from food and 40% from shisha.

He said stopping the sale of shisha would affect his business and food sales alone would not be able to sustain his business.

The restaurant currently has an al fresco area where customers can dine and smoke shisha, but Joy said turning it into a “smoking only” area would limit dining space.

“This is a tourist area and of course we have people from all over the world who want to come here and check out what the area has to offer.

“Many Middle Eastern customers do not feel comfortable eating at some of the other restaurants as they also serve alcohol, which is why there are a few Arabic-themed restaurants that have cropped up here.

“Naturally, shisha is a big part of their culture and to ban this would affect the entire business, ” he said, adding that his customers were mostly from Egypt, Saudi Arabia and other Middle Eastern countries.

Aidil, who operates a mini mart in Bukit Bintang selling Middle Eastern products that include shisha, said there had been talk among restaurant operators selling shisha in the area on how the smoking ban would affect them.

“We have had queries about the type of shisha that we sell, including whether the flavoured molasses have nicotine in them, ” he said.

A general sentiment among the sellers was that there should have been more engagement with the shisha community before the ban came into effect. 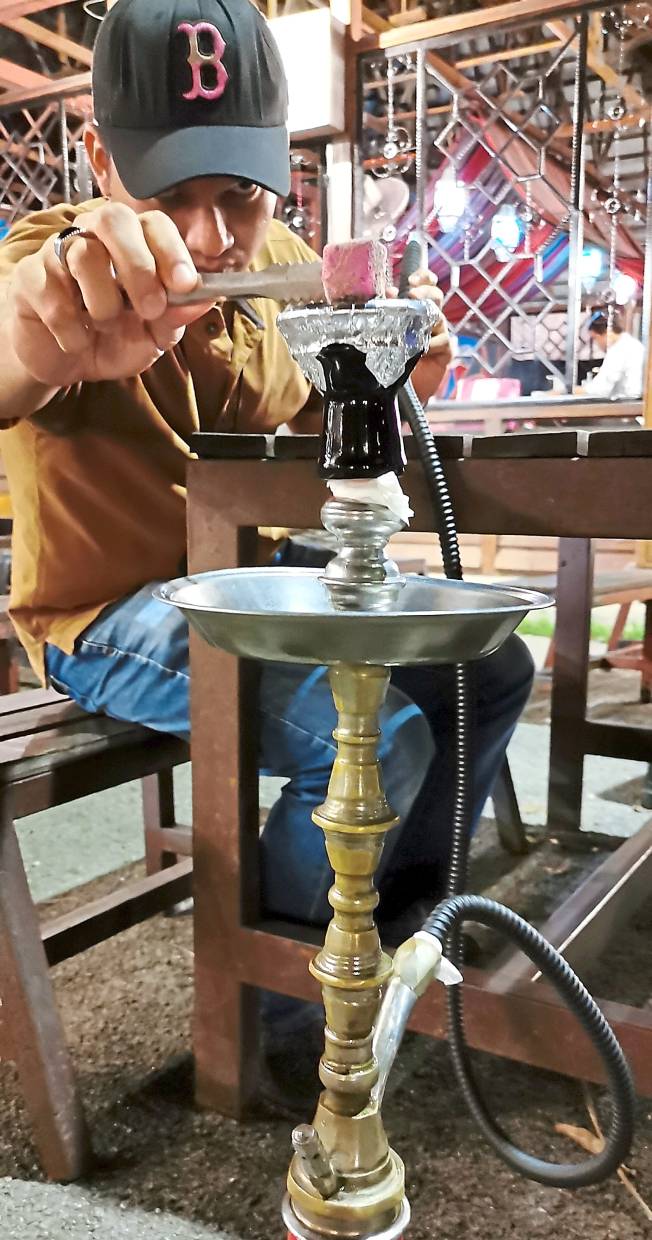 Shisha cafe operators are concerned because food sales alone will not be able to sustain their business. — Photos: YAP CHEE HONG/The Star

Besides tobacco products, vape and shisha with nicotine are also included in the smoking ban on eateries which was enforced from Jan 1.

Some shisha operators claim that their flavoured molasses do not contain nicotine.

Halab Castle Restaurant manager Joy says 40% of the restaurant’s sales are from shisha.

Shisha products on display at a mini mart in Bukit Bintang. Some restaurant owners are uncertain if shisha products that do not contain nicotine will be affected by the smoking ban.

Shisha products on display at a mini mart in Bukit Bintang. Some restaurant owners are uncertain if shisha products that do not contain nicotine will be affected by the no smoking ban.

An employee at Madfoon Palace in Bukit Bintang showing the flavoured herbal blend used in shisha.