Bittersweet ride from Asia to Europe

For Yoong, this feels like heaven on earth as he takes in the fantastic sight along the hiking trail to Annapurna Base Camp in Nepal. — Photos courtesy of Peter Yoong

This figure, which excludes the distance covered while using public transport, was his trail from Malaysia to France, through the Asia, Central Asia, Balkan and Europe route.

Although his planned two-year trip ended midway, Yoong, who began his first solo world cycling tour on Nov 19, 2017 and returned on Oct 28, 2018, hopes to complete his mission someday.

The 59-year-old cyclist from Puchong, Selangor, plans to hold a sale featuring his photographs taken during the exciting journey.

To be held this month in Kuala Lumpur, proceeds from the sale will go to charity.

He will also give two talks at the same venue on March 1.

Yoong recently shared some of the memorable snippets from his tour.

Having reached Pakistan in the winter of 2018, Yoong experienced his first snowfall at Fairy Meadows, at an altitude of 3,300m above sea level.

He felt like a child in the enchanted setting, making snow angels and throwing snowballs.

“My hike to Beyal Camp (Fairy Meadows) was like a grand entrance to a magical valley after coming out from the pine forest.

“My guide and I managed to take shelter from the snow when we found an empty cabin. It was another first for me; melting fresh snow to cook oatmeal porridge and make hot tea,” he said.

In Kashgar, China, Yoong was

surprised by the tight security at a mall where shoppers had their body searched and bags scanned even before they were allowed inside the premises.

Elsewhere, at a shoe store, he was amused how shoes were literally sold over a metal grill. A potential customer was given only one shoe to try on. Jokingly, Yoong reckoned the shopkeeper was worried he might run away with the footwear if he was given a pair!

On his way to Myothit, Myanmar, Yoong stopped to get a shut-eye in a tent he had set up by the riverside.

While sleeping, he was awoken by a policeman who spoke to

him in broken English, “Too dangerous. No sleep here. Come my house.”

To his surprise, he was led to

a bamboo hut — which was not owned by the policeman — by the main road.

The next day, at another stopover, Yoong was again stopped by the police. He jokingly gestured to be handcuffed so that he could sleep in the police station.

a ride over the hills, where he could cycle another 23km to Taungdwingyi town.

After three days of waiting at the border town of Sary-Tash, Kyrgyzstan, Yoong then cycled towards the remote Tajikistan border 45km away.

“The 37km ride was difficult as it took me into no man’s land after the Kyrgyzstan immigration border checkpoint.

“I was forced to camp high up in the mountain where the wind was strong and snow fell,” he said.

The next morning, he continued his final push towards the border, another 8km up the Kyzyl-Art Pass (4,280m), a mountain pass and

border crossing in the Trans-Alay Range on the border of Tajikistan and Kyrgyzstan.

He recalled, “The final 3km was the steepest trail, with 60kg weight on wheels and where the air was thin.

“I got breathless every seven to 10 steps and had to stop to rest my head on the bicycle. This went on over and over again for a few hours as I made my way up the pass. The weather didn’t help and the road was very muddy!”

Falling sick alone during a long journey was no fun, he recalled.

Despite this, Yoong cherishes the days of hardship during his solo adventures.

“Now it brings back good memories of how desperation can make you more resilient,” he said.

In Siliguri, India, Yoong was sick with fever, cough and runny nose. He had to self-medicate and rested for three days before continuing his journey.

Then there was the time when he had diarrhoea during extreme weather of -25°C at Annapurna Base Camp in Nepal. At 4,128m, it was frigid cold and the only toilet available was outdoors!

Yoong cherishes his experience — whether sweet or bitter — while cycling around the globe.

“It is how I would truly like to live. We need various experiences to spice up our life,” he said. 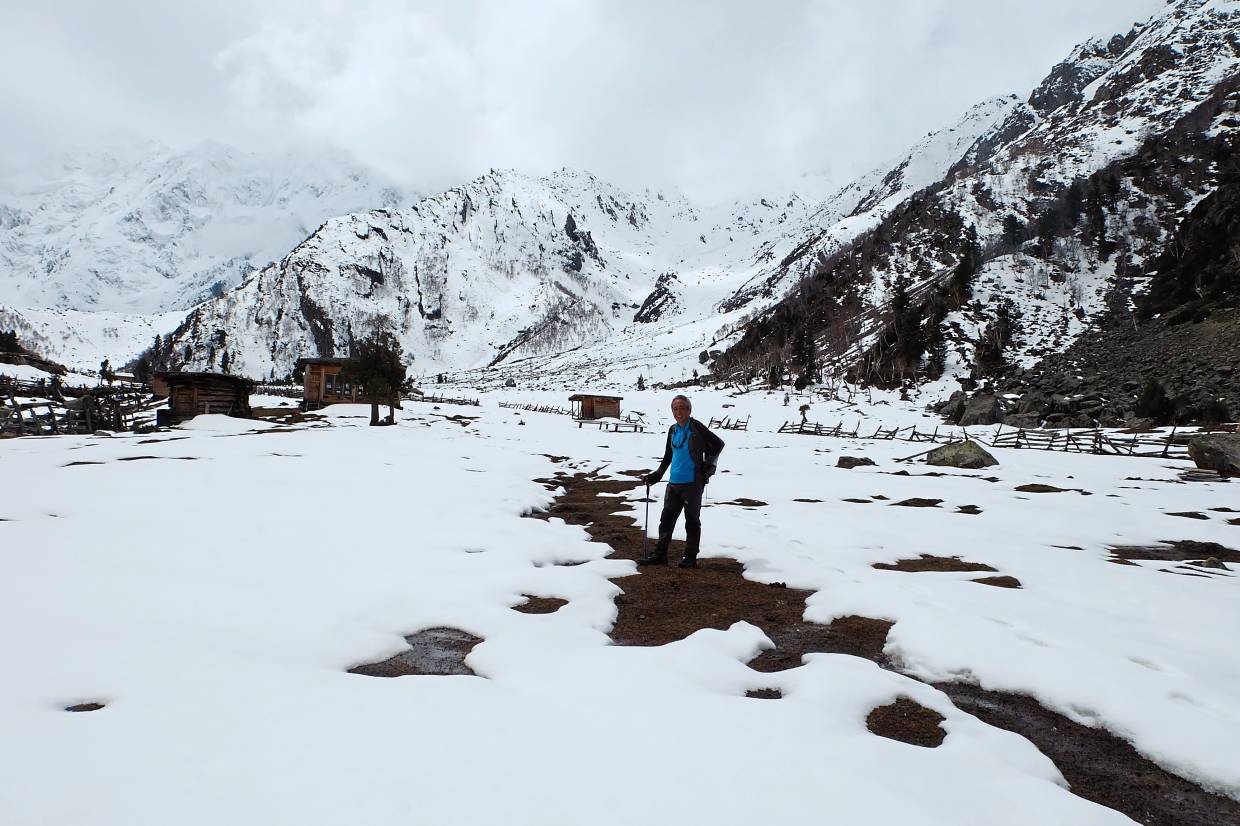 For Yoong, this feels like heaven on earth as he takes in the fantastic sight along the hiking trail to Annapurna Base Camp in Nepal. — Photos courtesy of Peter Yoong

This cable bridge across the Hunza River in Pakistan offers one of the most spectacular backdrops of mountains in the world.

On Day 223 of Yoong’s solo world cycling tour, he witnessed one of the most colourful sunrises at Amu Darya River in Uzbekistan.

The cyclist feeling on top of the world after hiking up to Mount Chamechaude in Grenoble, France.

Sunset over the Irrawaddy River in Myanmar. This was one of Yoong’s most memorable moments during his journey from Bagan to Mandalay.

Yoong enjoying the peace and quiet at Beyal Camp in Pakistan in 2018.