In conjunction with the Year of the Rat, Media Prima introduced its mascot, Shu Lai Bao.

“Staying positive is one of the main factors of success, which is why it is even more vital to do so despite the hustle and bustle of life.

“Our success should not only be impactful to us but should also benefit the people around us, ” he added.

and Sherlyn Seo — were among those present to help liven up the event.

Employees of Star Media Group Bhd (SMG) snapped photos with the ambassadors and uploaded them to social media with the hashtag #CNYKeepSmiling for a chance to win prizes such as a portable electric juicer and Shu Lai Bao plush toy. 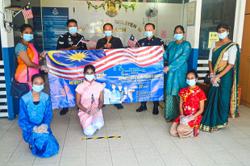